When shoul a tinnitus patient be referred to a physiotherapist? Details Published on 18 June 2015 Frequently related to pain and myofascial trigger points, somatosensory tinnitus is a very common type of tinnitus that requires specific assessment and treatment protocols. 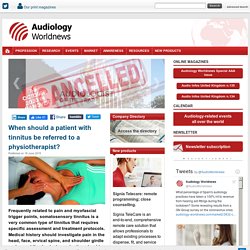 Medical history should investigate pain in the head, face, ervical spine, and shoulder girdle regions, while physical examination should assess the patient's posture, the presence of myofascial trigger points, and tinnitus modulation. Physical therapy should be customized according the patient's history and physical examination. There are essentially two types of tinnitus where physical therapy is recommended: somatosensory tinnitus and tinnitus related to emotional factors. In recent studies a strong relationship has been observed between tinnitus and TPs (Rocha and Sanchez, 2007, 2008, 2012). Overactive Facial Nerves Tinnitus Study. By Barry Keate A new study from the University of Michigan, Kresge Hearing Research Institute, has found when the cochlea is damaged by loud noise or other causes, sensory nerves in the face and neck become overactive and contribute to the noise we know as tinnitus. 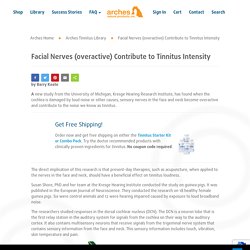 Get Free Shipping! Order now and get free shipping on either the Tinnitus Starter Kit or Combo Pack. Try the doctor recommended products with clinically proven ingredients for tinnitus. No coupon code required. The direct implication of this research is that present-day therapies, such as acupuncture, when applied to the nerves in the face and neck, should have a beneficial effect on tinnitus loudness. Susan Shore, PhD and her team at the Kresge Hearing Institute conducted the study on guinea pigs. The researchers studied responses in the dorsal cochlear nucleus (DCN). Posteri sahkopostiin1.

Treating brain inflammation could help silence tinnitus. If you've ever been kept awake by that ringing in your ears when everything else is quiet, you'd be familiar with how frustrating tinnitus can be. 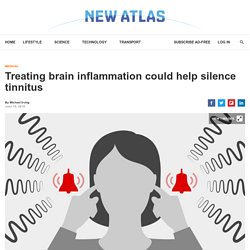 Now, research led by the University of Arizona may have uncovered a potential new treatment target – not in the ears but within the brain itself. The study suggests that neuroinflammation is to blame, and could be a new way to fix the problem. Tinnitus itself is a symptom of hearing loss, induced by loud noises. Stand too close to the speakers at too many gigs, or spend a lifetime working in a saw mill with no hearing protection, and you'll permanently damage your hearing.

But rather than just reducing the range of sounds you can hear, that damage can trigger tinnitus as a ringing or a hiss in the ears. Recent studies may have found the connection. Overactive nerves in head and neck may account for 'ringing in the ears' Do your ears ring after a loud concert" Nerves that sense touch in your face and neck may be behind the racket in your brain, University of Michigan researchers say. 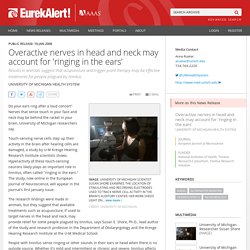 Touch-sensing nerve cells step up their activity in the brain after hearing cells are damaged, a study by U-M Kresge Hearing Research Institute scientists shows. Hyperactivity of these touch-sensing neurons likely plays an important role in tinnitus, often called "ringing in the ears. " The study, now online in the European Journal of Neuroscience, will appear in the journal's first January issue. The research findings were made in animals, but they suggest that available treatments such as acupuncture, if used to target nerves in the head and neck, may provide relief for some people plagued by tinnitus, says Susan E. 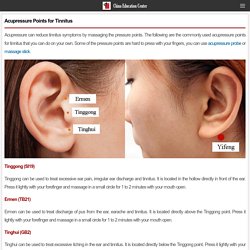 The following are the commonly used acupressure points for tinnitus that you can do on your own. Some of the pressure points are hard to press with your fingers, you can use acupressure probe or massage stick. Tinggong (SI19) Tinggong can be used to treat excessive ear pain, irregular ear discharge and tinnitus. It is located in the hollow directly in front of the ear. Ermen (TB21) Ermen can be used to treat discharge of pus from the ear, earache and tinnitus. Tinghui (GB2) The association between tinnitus, the neck and TMJ - Treningogrehab.no. Tinnitus is a common hearing disorder that affects up to 80% of the population at one time in their life, whilst approximately 5-20% of the younger (than 50 years of age) population are experiencing it in a prolonged manner. 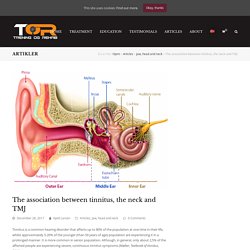 It is more common in senior population. Overactive nerves in head and neck may account for 'ringing in the ears'