Propaganda Soars Into Orbit. In December, Xi Jinping formally declared victory in his push to eradicate poverty in China. 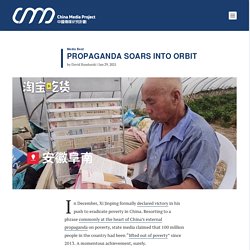 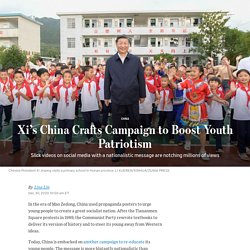 After the Tiananmen Square protests in 1989, the Communist Party rewrote textbooks to deliver its version of history and to steer its young away from Western ideas. Today, China is embarked on another campaign to re-educate its young people. The message is more blatantly nationalistic than anything in recent decades, with President Xi Jinping’s image often at the center. How My Mother and I Became Chinese Propaganda. Throwing my coat on over my pajamas, I rushed to the hospital, which is a five-and-a-half-minute walk from my apartment. 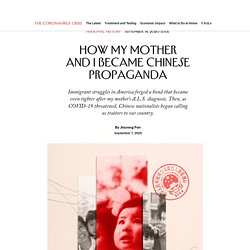 At the entrance, there were uniformed guards and a notice that said “Effective immediately, all visitation for patients and residents is temporarily suspended.” Something about my face caused one security guard to apologize. “It’s state policy,” he said. Thanking big brother - China’s post-covid propaganda push. Editor’s note: The Economist is making some of its most important coverage of the covid-19 pandemic freely available to readers of The Economist Today, our daily newsletter. 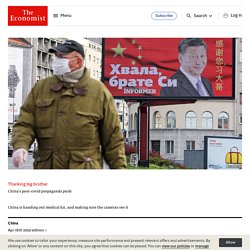 To receive it, register here. For our coronavirus tracker and more coverage, see our hub CHINA CALLS it the biggest emergency-aid operation that it has mounted abroad since 1949, when the Communist Party seized power. Hardly a day goes by without news of Chinese medical supplies, from masks to ventilators, reaching grateful recipients; and of Chinese medical teams flying to foreign countries to help them fight covid-19. Does China’s Propaganda Work? Likewise, internationally: While some foreign officials have praised China’s aid efforts, others have found it lacking. 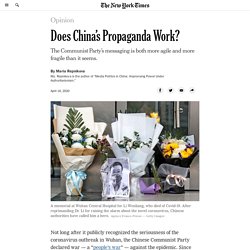 “Does China expect Kenya to fulfill its debt obligations in the wake of unparalleled disruption to our economy?” An editorial in The Standard, a popular Kenyan newspaper, asked last week. 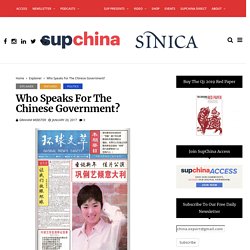 –China relations and observers struggle to derive signals about U.S. policy, there is a corresponding scramble to identify Chinese reactions to a U.S. leadership that regularly breaks from decades-long patterns. All aboard the propaganda express. Here are all the words Chinese state media has banned. Xinhua News Agency was established by the Chinese Communist Party in 1931 in a little house in Ruijin, Jiangxi Province. 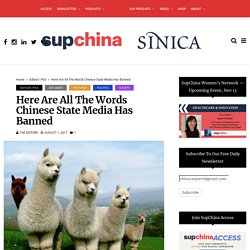 Until 1938, it was called the Red China News Agency 红色中华通讯社, but it has always had the same goal: to collect information for the Party and act as its voice. Despite its propagandist mission, Xinhua has produced some excellent journalists, such as Yang Jisheng 杨继绳, author of Tombstone, an excruciatingly detailed record of the Great Famine of 1958-1962. Xinhua operates in a similar way to Western newswires such as Reuters: Thousands of journalists and editors across China and in 170 foreign bureaus churn out news articles, video, opinion pieces, and breaking news briefs, which are fed out to newspapers and websites across the country.

But there are some key differences: Chinese newspapers and websites cannot only use Xinhua content for free; sometimes instructions from the authorities compel them to run Xinhua copy. Politics and society Law Religion and ethnicity. The Great Leap Backward: China's New Ad Campaign About Parents And Piety. By Abe Sauer A spot about a father suffering from Alzheimer’s is the most popular of a new series of ads that has young people on China’s social networks talking — or better put, it has them talking about crying. 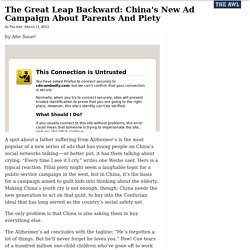 “Every time I see it I cry,” writes one Weibo user. Hers is a typical reaction. Chinese Posters. Signals From Xi’s Speech on Ideology. During a high-level conference on propaganda and ideology held this week, President Xi Jinping held his ground, and seemed to reaffirm his confidence in Wang Huning, the top Party leader in charge of ideology. 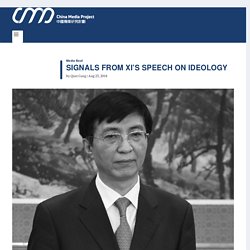 To help us understand the significance of Xi’s keynote speech at the event, I’ll focus first on two points of background and one point of timing. The first point of background is the criticism Xi Jinping has received since July this year. Scmp. Chinese President Xi Jinping has issued a rallying call for Communist Party cadres in charge of propaganda and ideology to close ranks around the “party core” as Beijing faces an escalating trade war with the United States and clearer pushback at home. 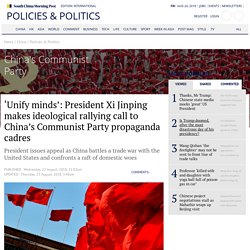 Xi made the call in a keynote speech at a high-level, five-yearly work conference held in Beijing on Tuesday and Wednesday. The conference was attended by most members of the Politburo and will set the tone for the country’s ideological direction for the coming years. It came soon after the political elite returned from their annual summer break at the coastal resort of Beidaihe last week. ﻿ Watch: Are Chinese consumers turning away from US products? The conference was chaired by Wang Huning, the ruling Communist Party’s ideology chief and a member of the supreme Politburo Standing Committee. 中国共产党入党誓词谱成歌曲，秒杀流行歌！ As Trade Fight Looms, China Turns Censors on Its Own Policies. Chinese Communist Party Modernizes its Message — With Rap-aganda - China Real Time Report.

Chinese mass-indoctrination camps evoke Cultural Revolution. ALMATY, Kazakhstan (AP) — Hour upon hour, day upon day, Omir Bekali and other detainees in far western China’s new indoctrination camps had to disavow their Islamic beliefs, criticize themselves and their loved ones and give thanks to the ruling Communist Party. When Bekali, a Kazakh Muslim, refused to follow orders each day, he was forced to stand at a wall for five hours at a time. A week later, he was sent to solitary confinement, where he was deprived of food for 24 hours. After 20 days in the heavily guarded camp, he wanted to kill himself. Chinese authorities in the heavily Muslim region of Xinjiang have ensnared tens, possibly hundreds of thousands of Muslim Chinese _ even foreign citizens _ in mass internment camps.

On This Chinese TV Show, Participants Have Nothing to Lose but Their Chains.