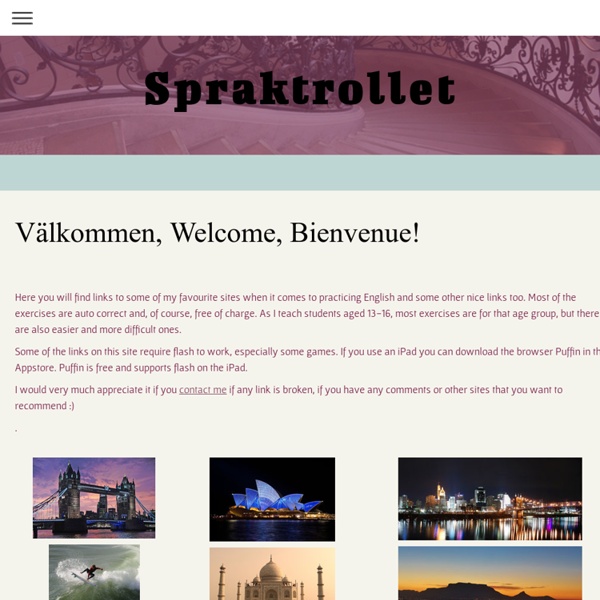 Peek of the week 10 - great videos and channels on YouTube Peek of the week 10 focuses on channels and inspirational videos on YouTube. What they have in common? They are informative, often funny and graphically appealing and, not to forget, they are in English. Here are some of my favorites.. Apart from English, I also teach History and I really like Epic Rap Battles .

Kazakh Singer Rises to Stardom in China in One Day ASTANA – Kazakh singer Dimash Kudaibergenov beat his opponents Jan. 21 in the first stage of the popular Chinese show “Singer 2017” and instantly rose to fame in China. Kudaibergenov, 22, was invited by the organisers and is the youngest participant, tengrinews.kz reports. He performed the song “SOS d’un terrien en détresse” in French after which he rose to stardom in China in just one day. Chinese mass media writes: “China is shocked by Kazakhs,” while Kudaibergenov’s name has been discussed all over social media in China. Kudaibergenov’s manager Alpamys Sharimov told the media that the singer’s image has been changed to suit the show. Comments Foil Arms and Hog is on Facebook. To connect with Foil Arms and Hog, join Facebook today. JoinLog In Foil Arms and Hog WTF is Brexit?

Science Experiments for Elementary Experiment #1 What will happen when I put raisins in a cup of sprite? After you do the experiment, you will find out that the raisins DANCE! myenglishproject - THE UNITED STATES OF AMERICA (USA) Get your brand new Wikispaces Classroom now and do "back to school" in style. guest Join | Help | Sign In myenglishproject Home guest| Join | Help | Sign In Turn off "Getting Started" 24 Best Poems to Teach in Middle and High School It can be hard to know which poems will spur your middle and high schoolers into deep, meaningful discussion and which will leave them, ahem, yawning. So we asked experienced teachers to share their favorites—the punch-in-the-gut poems that always get a reaction, even from teens. Here's what they had to say. 1.

5 TED-Ed Lessons for book lovers When did novels stop being novel? Do comic books belong in school? How do you make a pop-up book, anyway? If you love books, then this playlist is for you. Watch the 5 TED-Ed Lessons below: 1. These amazing liquid tricks make you question the secret power of water The Youtube illusionist Brusspup doesn't just show you these illusions, he also explains how you can perform them yourself with just ordinary kitchenware. There is just so much you can do with just water and other liquids. From making bottles disappear with glycerin to starting fires with water, or creating a Leidenfrost effect in just an ordinary frying pan. Brusspup, an extraordinary Youtube illusionist, is taking it to the next level by showing us 10 fun things you can do with liquids. Making liquids dance like crazy And he isn’t only showing us these amazing illusions; he also explains how you can perform them yourself.

Why cat clips rule the internet - CBBC Newsround With more than two million videos on YouTube, cats are one of the most searched for things on the internet. A new exhibition called "How Cats Took Over The Internet" has opened at the Museum of Moving Images in New York. The exhibition looks at the history of how they rose to internet fame, and why people like them so much. Almost half of all original YouTube videos are of people's pets, and around 26 billion views are just for cats, making them the single most popular category. Some cats have even become famous, and earn millions of pounds after their owners posted their pictures online. So how did cats become so popular?

Oxford City Council praised for introducing gender neutral 'MX' title on paperwork One of the country’s biggest councils has been praised for introducing gender neutral titles on forms. Oxford City Council told The Independent it has approved plans to include ‘Mx’ as an option on paperwork, alongside traditional terms such as Miss, Ms, Mrs and Mr. The change was made following recommendations from the council’s Equality and Diversity Group as a means of making the council more trans-inclusive; including non-binary people who can prefer the ‘Mx’ title as it does not denote a gender. Councillor Tom Haynes, Vice-Chair of Oxford City Council Scrutiny Committee told The Independent: “The council’s workforce has been changing to look more like the diverse communities that it serves.

» 7 Wonderful Books That You Can Read in Less Than A Day We love Sunday reading. We also love the feeling of accomplishment when finishing a book (and inching closer to our annual Goodreads goals). In honor of all this, we’ve put together a short list of short books and novellas that can be read in a day or less. So pick a book or two, pour yourself a cozy beverage, and dive in. (We love hearing from you! Be sure to let us know what you’re reading in the comments and/or what you would add to our recommendations.) Murder in the Classroom - Murder Mystery Game - Education of 21 Share Murder in the Classroom - Murder Mystery Game Description This is an activity for the ESL classroom though it can alo be used in other contexts.