10 Tricks to Appear Smart in Meetings. 9 Phrases That Make You Sound Young and Inexperienced at Work. When I started my first job, I was the youngest person in my organization. 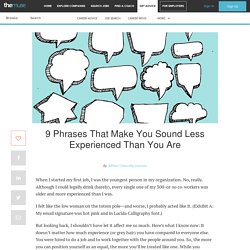 16 Honest Statements You Should Start Saying if You Want to Win People Over. What’s the difference between knowing what you’re doing and the separate (but also quite useful) attribute of looking as if you know what you’re doing? 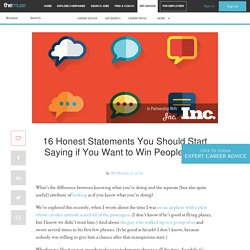 We’ve explored this recently, when I wrote about the time I was on an airplane with a pilot whose cavalier attitude scared all of the passengers. The 11 Best Career Quizzes to Help You Find Your Dream Job. Sure, BuzzFeed quizzes are a fun distraction. 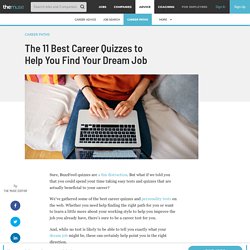 But what if we told you that you could spend your time taking easy tests and quizzes that are actually beneficial to your career? We’ve gathered some of the best career quizzes and personality tests on the web. Whether you need help finding the right path for you or want to learn a little more about your working style to help you improve the job you already have, there’s sure to be a career test for you. 5 Questions You Should Always Ask During a Performance Review. With December right around the corner, you’ve got one thing one your mind—and I’m not talking stocking stuffers. 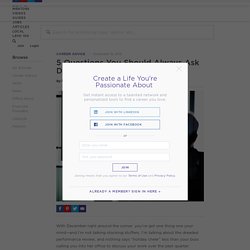 I’m talking about the dreaded performance review, and nothing says “holiday cheer” less than your boss calling you into her office to discuss your work over the past quarter. Key word: discuss! Keep in mind this is a discussion, not a one-sided conversation. This year, you won’t let your boss do all the talking.

It’s time to be an active participant, to take the reins in this conversation. How to Figure Out What to Do With Your Life. “What should I do with my life?” 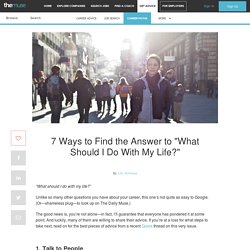 Unlike so many other questions you have about your career, this one’s not quite as easy to Google. (Or—shameless plug—to look up on The Daily Muse.) The good news is, you’re not alone—in fact, I’ll guarantee that everyone has pondered it at some point. And luckily, many of them are willing to share their advice. Most Common Behavioral Interview Questions. Interview prep 101 dictates that you should have your elevator pitch ready, a few stories polished, and a good sense of what you have to offer. 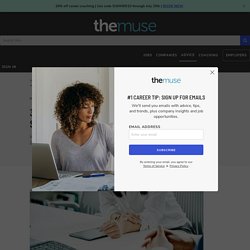 So, how do you get there? Lots of practice, ideally aloud. Why I Quit My Dream Job. I started my senior year of college on a pretty high note. 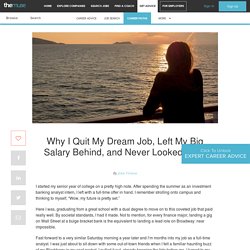 After spending the summer as an investment banking analyst intern, I left with a full-time offer in hand. I remember strolling onto campus and thinking to myself, “Wow, my future is pretty set.” The Secret To Successful Networking Is A Four Letter Word. An In-Depth Guide to Bullet Journaling - GenTwenty. Bullet journaling: if you don’t know what it is, it’s a funny phrase. 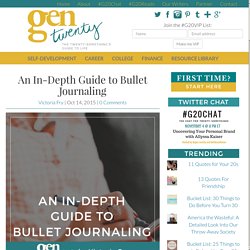 If you do know what it is, it might inspire thoughts of excitement or frustration. Or maybe both. The first time I heard of it and watched an introductory video, I thought, “Well, it’s a cool idea, in theory, but it looks too complicated.” I exited the browser tab and didn’t think about it for months. All that’s changed. First, a brief explanation for those of you who don’t know what bullet journaling is: it’s a note taking system mixed with a journal that allows you to keep track of anything, from your weekly grocery list to the name of the movie your friend told you about, and actually be able to find it again when you need it. Enhancing "real time" understanding. The complete guide to taking notes effectively at work.

Often, you’ll hear people say that you should “trust your instincts” when making decisions. 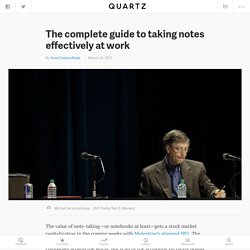 But are first instincts always the best? Psychological research has shown many times that no, they are often no better—and in many cases worse—than a revision or change. Despite enormous popular belief that first instincts are special, dozens of experiments have found that they are not. While that may be a useful fact to bring up in an academic discussion, anyone who has ever made a decision in real life will undoubtedly reply: But I remember times when I made a correct choice, then changed my mind and was wrong. Making Things Happen: Mastering Project Management - Scott Berkun. 5 Ways Positivity Can Help You Prepare for the Work Week - Office Decorations - Dream Cubicle. Fed Doesn’t See Bond Liquidity Problems, Calls Risks Moderate - news.markets.

The Federal Reserve does not see signs of liquidity problems in US bond markets, despite warnings from investors to the contrary. 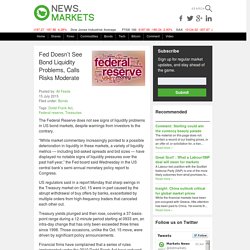 “While market commentary increasingly pointed to a possible deterioration in liquidity in these markets, a variety of liquidity metrics — including bid-asked spreads and bid sizes — have displayed no notable signs of liquidity pressures over the past half-year,” the Fed board said Wednesday in the US central bank’s semi-annual monetary policy report to Congress. US regulators said in a report Monday that sharp swings in the Treasury market on Oct. 15 were in part caused by the abrupt withdrawal of buy offers by banks, exacerbated by multiple orders from high-frequency traders that canceled each other out.

It cannot be mitigated through diversification, only through hedging or by using the right asset allocation strategy. INVESTOPEDIA EXPLAINS 'Systematic Risk' The Road to Recovery: Dodd-Frank, 5 Years Later - Third Way. The Impact of Dodd-Frank, 5 Years Later. In advance of Dodd-Frank’s 5th anniversary, the American Action Forum (@AAF) released an analysis of the law’s impact on employment, the housing market, and the regulatory burden. The AAF research found that 5 years later Dodd-Frank has imposed $24 billion in regulatory costs and 61 million in paperwork burden hours.

Only 60.3 percent of Dodd-Frank’s 398 regulations have been finalized, with another 21.5 yet to be proposed, and 18.2 percent in proposed form. Additional findings include: Regulatory Change Management. The Story In Pictures: Advisors’ Tweets To Financial Graphics. The very best financial advisors are story-tellers—and that includes not just words but pictures, too. Yet another reason to follow financial advisors on Twitter is their consistency in finding and sharing some excellent pictures (i.e., charts, graphs, visualizations, infographics, etc.).

This post celebrates the steady parade of visuals that are called out daily on AdvisorTweets.com and the advisors who find them. Below is a list of 11 on-topic graphic-based tweets shared in the last six months or so. Small Bank Infographic Final v20.jpg (JPEG Image, 950 × 1229 pixels) - Scaled (81%) Dodd-Frank Implementation. The Impact of Dodd-Frank, 5 Years Later. As we commemorate the 5th anniversary of the Dodd-Frank Act, the American Action Forum released 5 problems, 5 repercussions, and 5 fixes of the Dodd-Frank Act. The editions follow: AAF also released research on the economic impact of Dodd-Frank. The research, authored by AAF’s President Douglas Holtz-Eakin, found the law reduces economic growth by $895 billion over ten years. Understanding Dodd-Frank. Welcome to Davis Polk Regulatory Resources. Economic Avalanche - Pennsylvania College of Technology. An interview with Abdul B. Pathan, professor of economics. Photos by Larry Kauffman. The downturn/recession in our economy started in December of 2007.

The main reason for this current economic crisis is the bursting of the housing bubble, which was caused by high default rates on mortgage loans. In 2004, homeownership – which historically was very low – rose to 70 percent. This downturn caused the unemployment rate to rise. How the bubble grew and burst Homeownership is a major goal in our country. During the late ’90s and earlier this decade, house value was appreciating fast. Banks started lending to subprime borrowers who otherwise would not qualify. Managing Your Boss - Harvard Business Review.

Cures for Workplace Negativity. Your workplace is seething with hostility and negativity. No matter where the bad vibes came from, it's up to you to help make the atmosphere more positive, productive and supportive. Meet the ‘Frugalwoods’: The Cambridge couple planning to retire by 33 - Jobs news. Mr. and Mrs. How to hold people accountable - Performance management. Everybody, somebody, anybody, and nobody Does this little story sound familiar? “This is a story of four people named Everybody, Somebody, Anybody, and Nobody. 10 Tips to Survive the First Day on the Job. Bad ways to make a good impression. 10 Tips To Becoming the Value-Added, Indispensable Millennial Employee. When we train on the new workforce generation one of the most common themes that emerges is how can a Millennial worker become more value-added in a short amount of time. In addition to this theme usually the next sub-theme is ‘…make it practical, real life examples, attainable differences.’ With those two thoughts in mind we’ve put together a list of what we have heard, seen, and believe are ways that a new Millennial worker can become indispensable:

5 Ways to Impress Your New Boss When You're Starting a Job. Everyone knows first impressions are important, but it’s less obvious that the “first impression” for a new job can take 60, 90, or even 180 days to make. How to Be a Star at Work - 7 Career Rules from Cathie Black. How To Become A Star At Work. 6 Simple Rituals To Reach Your Potential Every Day. Are You a Star at Work? Awaken The Star Within You. What Really Makes Teams Work. How To Develop A “Brag Book” For Job Interviews — Splash Resumes. 10 Tips To Love The Job You Have Now. How Successful People Work Less and Get More Done.