Do You Even Need a Job? Screw It!

Post-scarcity economy. This would require a sophisticated system of resource recycling, in conjunction with advanced productive technology that enables conditions of material abundance, such as automated systems capable of converting raw materials into finished goods[not verified in body], which in turn enable the free distribution[2] of most or all economic output and the common ownership of the means of production used therefor. 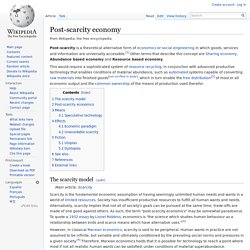 The scarcity model[edit] Scarcity is the fundamental economic assumption of having seemingly unlimited human needs and wants in a world of limited resources. Society has insufficient productive resources to fulfill all human wants and needs. Alternatively, scarcity implies that not all of society's goals can be pursued at the same time; trade-offs are made of one good against others. Decoupling Productivity & Employment. Working time. Standard working hours (or normal working hours) refers to the legislation to limit the working hours per day, per week, per month or per year. 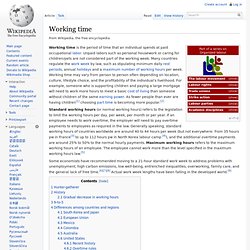 If an employee needs to work overtime, the employer will need to pay overtime payments to employees as required in the law. Generally speaking, standard working hours of countries worldwide are around 40 to 44 hours per week (but not everywhere: from 35 hours pw in France[3] to up to 112 hours pw in North Korea labour camp [4]), and the additional overtime payments are around 25% to 50% to the normal hourly payments. 21 hours. 21 hours A ‘normal’ working week of 21 hours could help to address a range of urgent, interlinked problems: overwork, unemployment, over-consumption, high carbon emissions, low well-being, entrenched inequalities, and the lack of time to live sustainably, to care for each other, and simply to enjoy life. 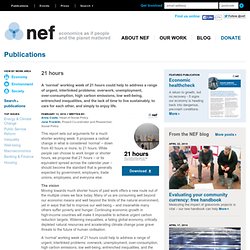 February 13, 2010 // Written by: Anna Coote, Head of Social PolicyJane Franklin, Project Co-ordinator and Researcher, Social Policy This report sets out arguments for a much shorter working week. It proposes a radical change in what is considered ‘normal’ – down from 40 hours or more, to 21 hours. The vision Moving towards much shorter hours of paid work offers a new route out of the multiple crises we face today. 21 hours as the new ‘norm’ Twenty-one hours is close to the average that people of working age in Britain spend in paid work and just a little more than the average spent in unpaid work. There is nothing natural or inevitable about what’s considered ‘normal’ today. Issues Close. Your Life in 2010 (written in 1990) Medieval peasants got more vacation time than you. Life for the medieval peasant was certainly no picnic. 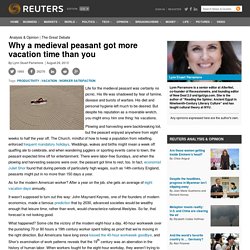 His life was shadowed by fear of famine, disease and bursts of warfare. His diet and personal hygiene left much to be desired. But despite his reputation as a miserable wretch, you might envy him one thing: his vacations. Plowing and harvesting were backbreaking toil, but the peasant enjoyed anywhere from eight weeks to half the year off. Mincome. Mincome was an experimental Canadian basic income project that was held in Dauphin, Manitoba during the 1970s. 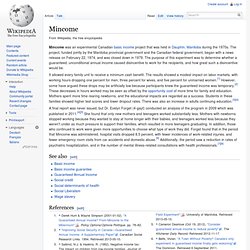 The project, funded jointly by the Manitoba provincial government and the Canadian federal government, began with a news release on February 22, 1974, and was closed down in 1979. The purpose of this experiment was to determine whether a guaranteed, unconditional annual income caused disincentive to work for the recipients, and how great such a disincentive would be. It allowed every family unit to receive a minimum cash benefit. The results showed a modest impact on labor markets, with working hours dropping one percent for men, three percent for wives, and five percent for unmarried women.[1] However, some have argued these drops may be artificially low because participants knew the guaranteed income was temporary.[2] These decreases in hours worked may be seen as offset by the opportunity cost of more time for family and education.

A final report was never issued, but Dr. Swiss to vote on 2,500 franc basic income for every adult. BERNE Fri Oct 4, 2013 3:57pm BST BERNE (Reuters) - Switzerland will hold a vote on whether to introduce a basic income for all adults, in a further sign of growing public activism over pay inequality since the financial crisis. 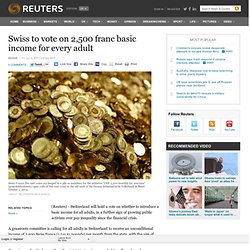 A grassroots committee is calling for all adults in Switzerland to receive an unconditional income of 2,500 Swiss francs (1,741.51 pounds) per month from the state, with the aim of providing a financial safety net for the population. Organisers submitted more than the 100,000 signatures needed to call a referendum on Friday and tipped a truckload of 8 million five-rappen coins outside the parliament building in Berne, one for each person living in Switzerland.

Under Swiss law, citizens can organise popular initiatives that allow the channelling of public anger into direct political action. The country usually holds several referenda a year. The timing of the vote has yet to be announced, pending official guidance from the government. ($1 = 0.9000 Swiss francs) Who pays for minimum-wage hikes? The poor. Raising the minimum wage will reduce poverty. 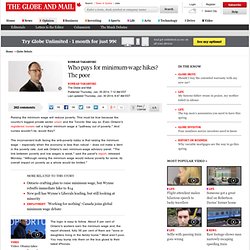 This must be true because the country’s biggest private sector union and the Toronto Star say so. Even Ontario’s registered nurses call a higher minimum wage a “pathway out of poverty.” And nurses wouldn’t lie, would they? The inconvenient truth facing the anti-poverty lobby is that raising the minimum wage – especially when the economy is less than robust – does not make a dent in the poverty rate.

Just ask Ontario’s own minimum-wage advisory panel. The logic is easy to follow. Many other minimum-wage workers live in double-salary households that, together, earn middle-class incomes. And what happens to these workers when the minimum wage goes up?