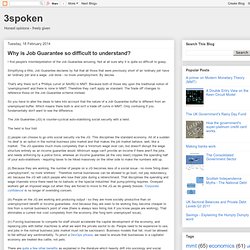 Not at all sure why it is quite so difficult to grasp. Simplifying a little, Job Guarantee declares by fiat that all those that were previously short of an 'ordinary job' have an 'ordinary job' and a wage. Job done - no more unemployment. By decree. That's why there isn't a 'Phillips curve' or NAIRU in MMT. The Center of the Universe » Blog Archive » UK Future Jobs Fund vindicated. Helps support the idea that an employed labor buffer stock works a lot better than an unemployed labor buffer stock, much like we’ve been suggesting for the last two decades: Future Jobs Fund vindicated By Tanweer AliNovember 27 — Last week the government finally published its impact report on Labour’s Future Jobs Fund. 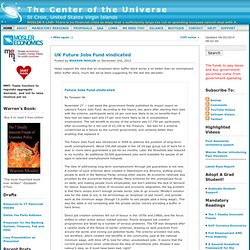 According to the report, two years after starting their jobs with the scheme, participants were 16 per cent less likely to be on benefits than if they had not taken part and 27 per cent more likely to be in unsubsidised employment. Six years on, MGNREGA still transforming rural India: report. On occasion of the release of a report which analyses the Mahatma Gandhi National Rural Employment Guarantee Scheme (MGNREGA), Prime Minister Manmohan Singh congratulated the Ministry of Rural Development for successful implementation of the programme. 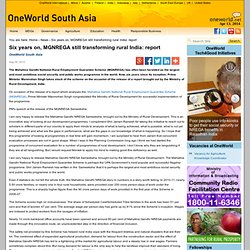 PM's speech at the release of the MGNREGA Sameeksha: I am very happy to release the Mahatma Gandhi NREGA Sameeksha, brought out by the Ministry of Rural Development. Great Leap Forward » THE JOB GUARANTEE: Finally Moving Beyond Theory to Implementation. Author: L. 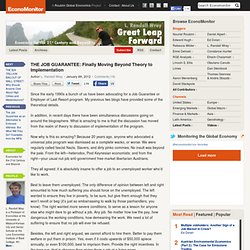 Randall Wray · · Share This Print. The Job Guarantee is Not Workfare. By Pavlina R. 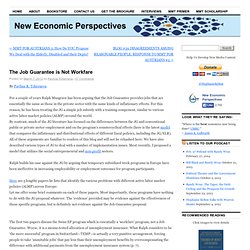 Tcherneva For a couple of years Ralph Musgrave has been arguing that the Job Guarantee provides jobs that are essentially the same as those in the private sector with the same kinds of inflationary effects. For this reason, he has been treating the JG a simple job subsidy with a training component, similar to various active labor market policies (ALMP) around the world. New Economic Perspectives: Doing What Needs to Be Done: Facing the Future with Full Employment and a Renewed Public Sector. By Dan Kervick As you read this, millions of Americans who desperately want to work either cannot find employment at all, or cannot find the quantity and quality of work they need to meet their own needs and the needs of their families. 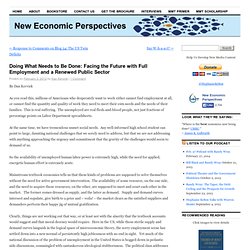 This is real suffering. The unemployed are real flesh-and-blood people, not just fractions of percentage points on Labor Department spreadsheets. At the same time, we have tremendous unmet social needs. Great Leap Forward » The Job Guarantee as an Alternative to Enforced Idleness. But What Will They Do? Examples from the WPA. Author: L. 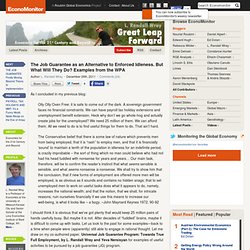 Randall Wray · · Share This Print As I concluded in my previous blog: Olly Olly Oxen Free: it is safe to come out of the dark. A sovereign government faces no financial constraints. We can have payroll tax holiday extensions and unemployment benefit extension. The Conservative belief that there is some law of nature which prevents men from being employed, that it is “rash” to employ men, and that it is financially ‘sound’ to maintain a tenth of the population in idleness for an indefinite period, is crazily improbable – the sort of thing which no man could believe who had not had his head fuddled with nonsense for years and years… Our main task, therefore, will be to confirm the reader’s instinct that what seems sensible is sensible, and what seems nonsense is nonsense.

Kalecki’s “Political Aspects of Full Employment” In my previous post, it was mentioned in passing that although Kalecki agreed with a “solid majority” of economists that, economically, full employment could be maintained through a government spending program, he argued in his famous 1943 essay, Political Aspects of Full Employment, that political factors would prevent such a policy from being viable under capitalism. 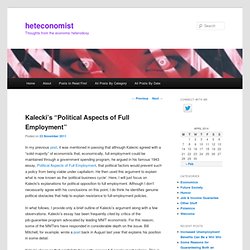 He then used this argument to explain what is now known as the ‘political business cycle’. Here, I will just focus on Kalecki’s explanations for political opposition to full employment. Although I don’t necessarily agree with his conclusions on this point, I do think he identifies genuine political obstacles that help to explain resistance to full-employment policies. Argentina JEFES Program.

Rural job guarantees: Faring well. Professor Harvey Rutgers University Law-Camden. India: Shovelling for their supper. Job Guarantee. NREGS (Kerala) The National Rural Employment Generation Scheme (NREGS) is a recent employment scheme in India for providing 100 days guaranteed wage employment for all employment seekers above 18 years of age and willing to do work. The scheme came into force on 5 September 2005 in 199 districts in India and extended to another 130 districts later.

A NREGS Worksite In Kerala, the scheme was implemented in Palakkad and Waynad districts initially on 5 February 2006 and it was extended to all the 14 districts in the State on 1 April 2008. Kerala is a tiny state in India with very high unemployment - most of them are educated - in the country. Around five lakh people among them are estimated to have willingness to do physical labour.

Mahatma Gandhi National Rural Employment Guarantee Act. The stated objective of the Act is “to enhance livelihood security in rural areas by providing at least 100 days of guaranteed wage employment in a financial year to every household whose adult members volunteer to do unskilled manual work. This work guarantee can also serve other objectives: generating productive assets, protecting the environment, empowering rural women, reducing rural-urban migration and fostering social equity, among others.

"[27] Argentina's president irks U.S. pundits - Argentina. When Argentina’s president, Cristina Fernández de Kirchner, was reelected two weeks ago by the largest margin of any leader since the return of democracy in 1983, even her bitterest opponents had to admit that she’d done something right. Clarín, Buenos Aires’ highest-circulation daily and a strong contender for the title of Kirchner’s enemy No. 1, acknowledged that the president had earned her victory by creating jobs and prosperity.

Mauricio Macri, the conservative mayor of Buenos Aires, congratulated Fernández and told reporters, “If things go well for the president, things go well for us.” But on the pages of America’s leading newspapers, the tone was strikingly less conciliatory. Despite her evident success, the New York Times dedicated itself to cataloging Fernandéz’s failings before concluding, in the voice of one source, that Argentine economic growth will soon slow and “there will be a political reckoning.”