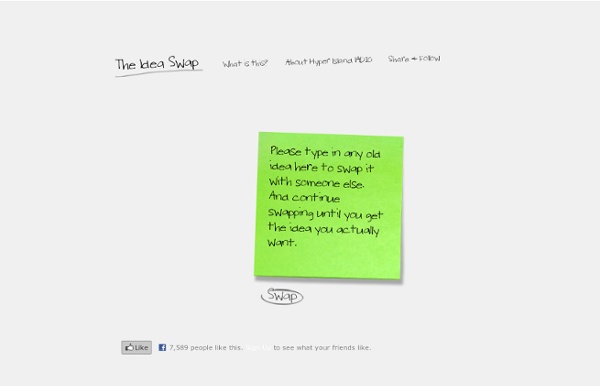 The Power of Habit and How to Rewire Our "Habit Loops" by Maria Popova What Iraqi kebob vendors have to do with your New Year’s resolutions. As a young man, Benjamin Franklin set out to improve himself by devising a chart-based log for tracking his progress against the virtues he identified as essential to good personhood. Each week, he would pick a virtue to cultivate, then put a black pencil mark in his calendar chart on any day he failed to uphold the virtue. 25 Useful Brainstorming Techniques by Celes on Feb 9, 2009 | ShareThis Email This Post Caught with a problem you cannot solve? Need new ideas and solutions? The process of brainstorming requires you to think out of the box that is keeping you in the problem.

9 Productivity Tricks for Procrastinators Irony: As I started to write this article, I thought, “I’ll just go play one quick Sudoku game first.” I caught myself in the act and marched myself to my laptop. People who say that procrastination is about laziness are probably the same people who think that anorexia is about not eating enough. Procrastination isn’t about laziness. It’s about fear. 6 Tips to Generate Outstanding Ideas What’s the secret creative geniuses share to come up with their remarkable ideas? Even though idea generation may look like a somewhat mysterious and random process, there is a practical, simple lesson we can all apply to increase our chances of having great ideas. Connections, Connections, Connections Everybody wants to have great ideas, but have you ever wondered what an idea is? If you haven’t, take a few moments to think about it. The answer is probably simpler than you initially thought: ideas are connections.

THE MENTAL MARATHON THE MENTAL MARATHONBy Mindy Solkin Owner and Head Coach The Running Center We all know that running requires a great amount of physicality. But your mental fortitude is equally important. There are two types of mental training in the sport of running: "Association" and "Dis-association". An IdeaRally can generate great ideas for innovation at IdeaConnection Are you interested in emerging thoughts and Ideas focused on your key R&D interests? Are you interested in breakthrough thinking that will help you set strategic future directions for your R&D? There are many types of “cold fusion” problems that have had incremental advances over time, but need fresh, new perspectives to move research and discovery to the next level.

Magazine - The Perfected Self B. F. Skinner’s notorious theory of behavior modification was denounced by critics 50 years ago as a fascist, manipulative vehicle for government control. But Skinner’s ideas are making an unlikely comeback today, powered by smartphone apps that are transforming us into thinner, richer, all-around-better versions of ourselves. The only thing we have to give up?

100 Incredible Lectures from the World's Top Scientists Posted on Thursday June 18, 2009 by Staff Writers By Sarah Russel Unless you’re enrolled at one of the best online colleges or are an elite member of the science and engineering inner circle, you’re probably left out of most of the exciting research explored by the world’s greatest scientists. But thanks to the Internet and the generosity of many universities and online colleges, you’ve now got access to the cutting edge theories and projects that are changing the world in this list below. If you’re looking for even more amazing lectures, check out our updated list for 2012 with more talks from great minds. General