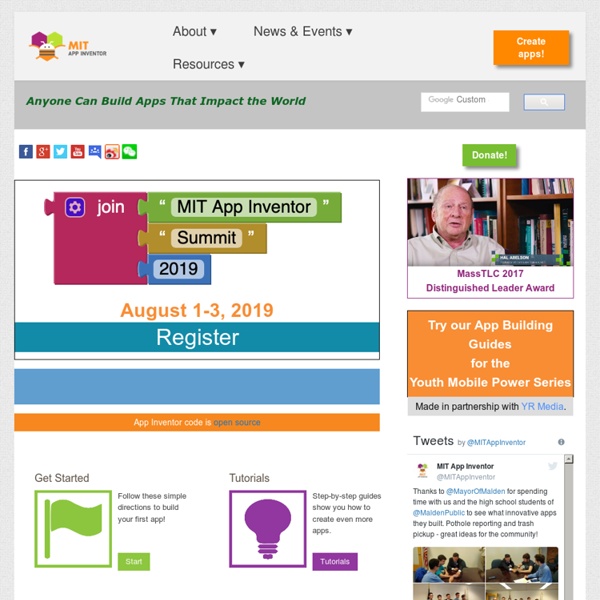 Get Started Follow these simple steps to build your first app. Tutorials Step-by-step guides show you how to build all kinds of apps. Teach Teachers, find out about curriculum and teaching resources. Forums Join community forums to get answers to your questions.

Introduction To develop apps for Android, you use a set of tools that are included in Android Studio. In addition to using the tools from Android Studio, you can also access most of the SDK tools from the command line. Developing with Android Studio is the preferred method because it can directly invoke the tools that you need while developing applications. However, you may choose to develop with another IDE or a simple text editor and invoke the tools on the command line or with scripts. This is a less streamlined way to develop because you will sometimes have to call command line tools manually, but you will have access to the same number of features that you would have in Android Studio.

Visual programming language In computing, a visual programming language (VPL) is any programming language that lets users create programs by manipulating program elements graphically rather than by specifying them textually. A VPL allows programming with visual expressions, spatial arrangements of text and graphic symbols, used either as elements of syntax or secondary notation. For example, many VPLs (known as dataflow or diagrammatic programming)[1] are based on the idea of "boxes and arrows", where boxes or other screen objects are treated as entities, connected by arrows, lines or arcs which represent relations. SQLZOO Learn SQL using: SQL Server, Oracle, MySQL, DB2, and PostgreSQL. Reference: how to... How to read the data from a database.

Activities An Activity is an application component that provides a screen with which users can interact in order to do something, such as dial the phone, take a photo, send an email, or view a map. Each activity is given a window in which to draw its user interface. The window typically fills the screen, but may be smaller than the screen and float on top of other windows. An application usually consists of multiple activities that are loosely bound to each other. Typically, one activity in an application is specified as the "main" activity, which is presented to the user when launching the application for the first time. Each activity can then start another activity in order to perform different actions. Setting Up App Inventor 2 You can set up App Inventor and start building apps in minutes. The Designer and Blocks Editor run completely in the browser (aka the cloud). To see your app on a device while you build it (also called "Live Testing"), you'll need to follow the steps below. You have three options for setting up live testing while you build apps If you are using an Android device and you have a wireless internet connection, you can start building apps without downloading any software to your computer.

A First Vim Tutorial I've started using vim again. I thought I would post some of my vim notes. I generally use vim 50% in the terminal, and now 50% as Cream (UPDATE: After learning more Vim commands I switched from Cream to regular Gvim). Cream is a version of gvim that makes using vim really easy. Getting Started with MIT App Inventor 2 App Inventor is a cloud-based tool, which means you can build apps right in your web browser. This website offers all the support you'll need to learn how to build your own apps. The App Inventor software, or "service" is at ai2.appinventor.mit.edu. You can get there by clicking the orange "Create Apps!"

Collection of Coders Games to Improve Your Skills Hey there! Sometimes we need to entertain and relax a little bit, but we can do it with a benefit of ourselves. Today we're going to review a collection of sites which will train your brain and improve your coding skills. Games Codecombat - is an awesome multiplayer game which helps you learn to program, not a gamified lesson course.Screeps - the world's first MMO strategy open world game for programmers.Git Game - is a terminal game designed to test your knowledge of git commands.Elevator Saga - your task is to program the movement of elevators, by writing a program in JavaScript. The goal is to transport people in an efficient manner.CodeChef — you can solve real problems and participate in different contests which are performed on the monthly basis.Codingame turns solving into a game where you receive points for every group of test you've passed.Hacker.org is a series of puzzles and tests which measure your knowledge.

CustomBlocks - blockly - Overview of creating custom blocks. - A visual programming editor This document is aimed at developers who wish to create new blocks within Blockly. It is assumed that one has a local copy of Blockly which one can edit, one is generally familiar with Blockly's usage, and one has a basic understanding of JavaScript or some similar language. Blockly comes with a large number of pre-defined blocks.