Balamory. Balamory is a live action television series on British television (BBC One, BBC Two and CBeebies) for pre-school children, based around the fictional small island community of Balamory in Scotland. It was produced between 10 February 2002 and 14 April 2005 by BBC Scotland, with 254 episodes made (including a DVD-exclusive Christmas episode). The series was created by Brian Jameson. Balamory was filmed mostly in Tobermory on the Isle of Mull, with the exception of scenes at Archie's castle filmed at Fenton Tower in North Berwick and Other Scenes like the park and Nursery Filmed in Glasgow Characters[edit] Other than Suzie Sweet and Penny Pocket, who share a building and run Pocket and Sweet (a shop set in Balamory), each main character has their own house in the town, and each house has a distinctive colour.

Balamory (TV Series 2002–2005. Series 4 episode guide. Balamory Feature Page on Undiscovered Scotland. What's the story in Balamory? Young children, their parents, and students will probably still remember the BBC's phenomenally popular children's series Balamory. For the rest of us it was a little like Play School, but with a collection of characters set against the beautiful and brightly painted backdrop of the Isle of Mull's main village, Tobermory. 254 episodes were made between 2002 and 2005, when filming ceased. Although the series is no longer made, its arrival on DVD and repeats on children's television have given rise to a new generation of young fans. The result is that the steady stream of families with young children making the pilgrimage to Tobermory from all parts of the UK and beyond continues undimmed. This page is designed primarily to help intending pilgrims. For the avoidance of doubt, this is not the official BBC Balamory website, which fans should visit.

Wouldn't you like to go? Those intending to visit Balamory might want to bear a few things in mind. Driving on Mull. CBeebies - Balamory. Balamory. Balamory Theme Tune - Opening Song. CBeebies Grown-ups - Balamory - Archie Invention game. Balamory Tobermory Isle of Mull. Tobermory with it’s colourful waterfront was chosen by the BBC as the location of the popular children’s television series Balamory. The houses are situated in Tobermory apart from Archie’s Castle which is now a hotel called Fenton Tower in North Berwick and the Nursery shots were taken in Glasgow.

Please note that Josie Jump’s House is a small Hotel called Park Lodge but the other accommodations are all private. It is not possible to look around any of the properties but most residents are happy for the children to be photographed outside their houses. Please be aware that Balamory ceased being filmed in Tobermory many years ago now, but repeats are shown regularly on BBC television. Tobermory, on the Isle of Mull was selected for the Children’s T.V programme Balamory, because of its beautiful location, and, more importantly, its multi-coloured houses. Most of the filming was done here in Tobermory, with the help of our own Nursery group, fire crew, local attractions and businesses. Www.holidaymull.co.uk/pdf/balamory-houses.pdf. Miles Jupp. Early life and education[edit] During his time at university, he performed with acclaimed improvised comedy troupe the Improverts and took part in pantomime productions with the Edinburgh University Theatre Company at Bedlam Theatre.[1] Career[edit] Television and film[edit] Jupp is probably best known as Archie the Inventor in CBeebies' Balamory.

Jupp also had a role in the BBC Scotland comedy programme Live Floor Show, where he played an eccentric, foul-mouthed comedian. Live[edit] In March 2008, Jupp performed his third solo show entitled Everyday Rage and Dinner Party Chit Chat at the Etcetera Theatre in Camden. Miles Jupp. Miles Jupp › Actor, Comedian & Writer. BBC Comedy Blog: "You can either laugh or soil yourself" - Miles Jupp on being in The Thick of It. Miles Jupp on.

Have you heard the one about the vicar's son, Miles Jupp? - Comedy - Arts. Sitcom fans will recognise Jupp, 31, as the lay reader Nigel in the hit series Rev. 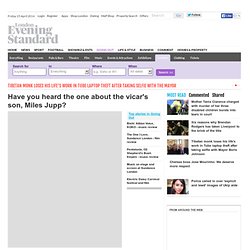 He also recently made a splash on Have I Got News For You, gently taking Liverpudlian host John Bishop to task for having an almost indecipherable delivery. The result made for very funny television. Minister's son bashes Bishop. Sitting in his tidy Kilburn lounge drinking coffee, Jupp reveals that he made history on Have I Got News For You off-camera. "I am apparently only the second person who has stopped the filming to go to the toilet. He has noticed that people respond positively to his good manners, admitting that he would very happily write filth "but I can't say it".

The upper-class stage persona is an exaggeration but only slightly. "At the school sports day they were looking for someone famous to give out the prizes, and Robert Powell, who played Jesus on television, did it. He claims that he only ended up studying for his divinity degree at Edinburgh by accident. His real love is cricket.