Ernst von Glasersfeld. Ernst von Glasersfeld (March 8, 1917, Munich – November 12, 2010, Leverett, Franklin County, Massachusetts) was a philosopher, and Emeritus Professor of Psychology at the University of Georgia, Research Associate at the Scientific Reasoning Research Institute, and Adjunct Professor in the Department of Psychology at the University of Massachusetts Amherst. 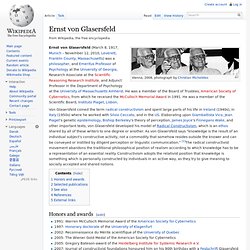 He was a member of the Board of Trustees, American Society of Cybernetics, from which he received the McCulloch Memorial Award in 1991. He was a member of the Scientific Board, Instituto Piaget, Lisbon. Von Glasersfeld coined the term radical constructivism and spent large parts of his life in Ireland (1940s), in Italy (1950s) where he worked with Silvio Ceccato, and in the US. Honors and awards[edit] Selected publications[edit] Glasersfeld, E. von, (2001) The radical constructivist view of science. See also[edit] Yerkish References[edit] This article incorporates information from the equivalent article on the German Wikipedia. PBL 대표적인 학자 Barrows. Spencer Kagan's Cooperative Learning Structures - an article by Jane Joritz-Nakagawa. 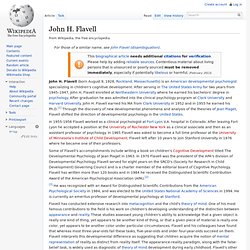 Flavell (born August 9, 1928, Rockland, Massachusetts) is an American developmental psychologist specializing in children's cognitive development. After serving in The United States Army for two years from 1945–1947, John H. Flavell enrolled at Northeastern University where he earned his bachelors' degree in psychology. After graduation he was admitted into the clinical psychology program at Clark University and Harvard University. John H. In 1955-1956 Flavell worked as a clinical psychologist at Fort Lyon V.A. hospital in Colorado. Some of Flavell's accomplishments include writing a book on children's Cognitive Development titled The Developmental Psychology of Jean Piaget in 1963. 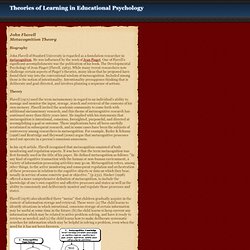 He was influenced by the work of Jean Piaget. One of Flavell's significant accomplishments was the publication of his book, The Developmental Psychology of Jean Piaget (Flavell, 1963). While many recent researchers now challenge certain aspects of Piaget's theories, many ideas that he proposed have found their way into the conventional wisdom of metacognition. Theory Flavell (1971) used the term metamemory in regard to an individual's ability to manage and monitor the input, storage, search and retrieval of the contents of his own memory. In his 1976 article, Flavell recognized that metacognition consisted of both monitoring and regulation aspects. Flavell (1976) also identified three “metas” that children gradually acquire in the context of information storage and retrieval. Flavell (1979) was another seminal paper. According to Flavell (1979). David Ausubel. David Paul Ausubel (1918–2008) was an American psychologist born in New York. 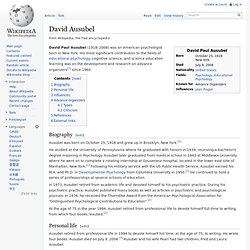 His most significant contribution to the fields of educational psychology, cognitive science, and science education learning was on the development and research on advance organizers[1] since 1960. Biography[edit] Ausubel was born on October 25, 1918 and grew up in Brooklyn, New York.[2] He studied at the University of Pennsylvania where he graduated with honors in 1939, receiving a bachelor's degree majoring in Psychology. Ausubel later graduated from medical school in 1943 at Middlesex University where he went on to complete a rotating internship at Gouveneur Hospital, located in the lower east side of Manhattan, New York.[2] Following his military service with the US Public Health Service, Ausubel earned his M.A. and Ph.D. in Developmental Psychology from Columbia University in 1950.[2] He continued to hold a series of professorships at several schools of education.

Personal life[edit] Influences[edit] Subsumption Theory. Ausubel's theory is concerned with how individuals learn large amounts of meaningful material from verbal/textual presentations in a school setting (in contrast to theories developed in the context of laboratory experiments). 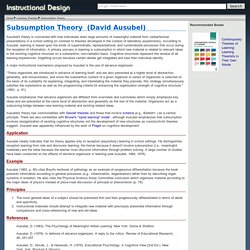 According to Ausubel, learning is based upon the kinds of superordinate, representational, and combinatorial processes that occur during the reception of information. A primary process in learning is subsumption in which new material is related to relevant ideas in the existing cognitive structure on a substantive, non-verbatim basis. Cognitive structures represent the residue of all learning experiences; forgetting occurs because certain details get integrated and lose their individual identity. A major instructional mechanism proposed by Ausubel is the use of advance organizers: Ausubel's theory has commonalities with Gestalt theories and those that involve schema (e.g., Bartlett< ) as a central principle.