Using psychology in game design. Berni Good tells Develop what studios can learn from cyberpsychology [This feature was published in the June 2013 edition of Develop magazine, which is available through your browser and on iPad.] 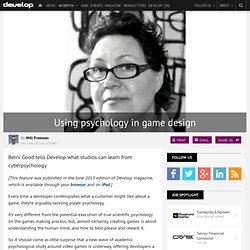 Every time a developer contemplates what a customer might like about a game, they’re arguably tackling player psychology. It’s very different from the potential execution of true scientific psychology on the games making process, but, almost certainly, creating games is about understanding the human mind, and how to best please and reward it. So it should come as little surprise that a new wave of academic psychological study around video games is underway, offering developers a fresh tool in their arsenal. As more experts explore how humans interact with technology, games developers with open minds can now employ new methods of understanding how to offer their customers the most well received – and most profitable – experiences. “Games can really address intrinsic needs we have as human beings.

The Game May Be The Same, But Here's Why the Controls Change. PRACTICE: Game Design in Detail impressions. [Editor's note: Keith Burgun is the lead designer at Dinofarm Games, makers of 100 Rogues. 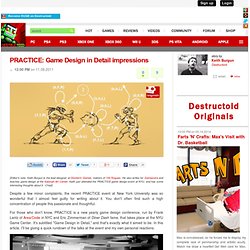 He also writes for Gamasutra and teaches game design at the Katonah Art Center. Keith just attended the PRACTICE game design event at NYU, and has some interesting thoughts about it. -Chad] Despite a few minor complaints, the recent PRACTICE event at New York University was so wonderful that I almost feel guilty for writing about it. You don't often find such a high concentration of people this passionate and thoughtful. For those who don't know, PRACTICE is a new yearly game design conference, run by Frank Lantz of Area/Code in NYC and Eric Zimmerman of Diner Dash fame, that takes place at the NYU Game Center.

Saturday Morning Before the first lecture, there was about an hour dedicated to breakfast, where all the game designers were milling about, drinking coffee, and chatting. The first lecture was Dr. I mentioned that he's prolific, and I meant it -- Dr. After Dr. Mr. Sunday Morning Mr. Conclusion. Jon Shafer's Blog - Design Case Study: Unity of Command. The following blog post, unless otherwise noted, was written by a member of Gamasutra’s community. 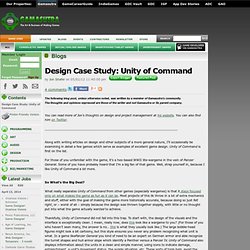 The thoughts and opinions expressed are those of the writer and not Gamasutra or its parent company. You can read more of Jon's thoughts on design and project management at his website. You can also find him on Twitter. Along with writing articles on design and other subjects of a more general nature, I’ll occasionally be examining in detail a few games which serve as examples of excellent game design. Unity of Command is first on the list. For those of you unfamiliar with the game, it’s a hex-based WWII lite-wargame in the vein of Panzer General. So What’s the Big Deal? What really separates Unity of Command from other games (especially wargames) is that it stays focused only on what makes the game as fun as it can be. Thankfully, Unity of Command did not fall into this trap. The gameplay is also noteworthy, particularly in its omission of superfluous elements. The basics work like this. Jeff Stewart's Design Blog.

Why Diablo 3 is less addictive than Diablo 2: a “scientific” explanation. UPDATE: Got a response from Blizzard! 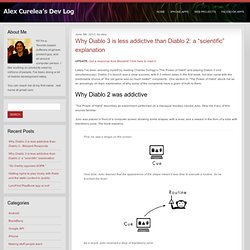 Click here to read it. Lately I’ve been amusing myself by reading Charles Duhigg’s “The Power of Habit” and playing Diablo 3 (not simultaneously). Diablo 3’s launch was a clear success, with 6.3 million sales in the first week, but also came with the predictable chorus of “the old game was so much better!” Complaints. Games Don't Tell Stories. People Tell Stories. - What Games Are: Game Design, Development, Publishing, Marketing and Art.

I posed the title of this post as a topic at GameCamp. 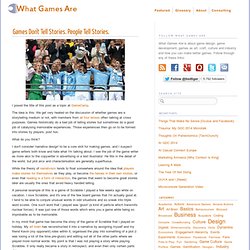 The idea is this: We get very heated on the discussion of whether games are a storytelling medium or not, with members from all four lenses often talking at cross purposes. Games historically do a bad job of telling stories but sometimes do a good job of catalysing memorable experiences. Those experiences then go on to be formed into stories by players, post hoc. What do you think? I don't consider 'narrative design' to be a core skill for making games, and I suspect game writers both know and hate what I'm talking about. While the theory of narrativism tends to float somewhere around the idea that players make stories for themselves as they play, or become the heroes in their own stories, or even that reading is a form of interaction, the games that seem to become great stories later are usually the ones that avoid heavy handed telling.

Features - The Designer's Notebook: How Should We Judge a Game Jam? This year I was invited to my first Global Game Jam event. 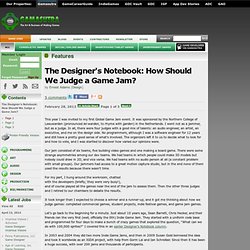 It was sponsored by the Northern College of Leeuwarden (pronounced lei-warden, to rhyme with garden) in the Netherlands. I went not as a jammer, but as a judge. In all, there were four judges with a good mix of talents: an audio engineer, an artist, an executive, and me on the design side. No programmers, although I was a software engineer for 12 years and still have a pretty good sense of what's involved. The organizers left it to us to decide what to look for and how to vote, and I was startled to discover how varied our opinions were.