How a Tweet Turned Into the Best New Multiplayer Game in Years. Josh Valcarcel/WIRED Screenshot: Other Ocean Interactive One of the weirdest, coolest, most hyped multiplayer games in years is here, and it started with a tweet: “Contemplating building a game entirely with friends on twitter/fb. 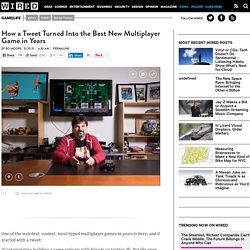 Totally open and ‘Mad Lib’ style. Could be fun or totally awful.” The tweet, posted by Mike Mika a little more than a year ago, was followed by another. “Where to go with this?” Mika is not a big name in games. [Dev Tips] 6 lessen uit gamejams: “Omarm de inspiratie!” Dylan Nagel deed in Amsterdam als producer mee met de Global Game Jam. 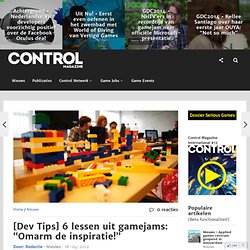 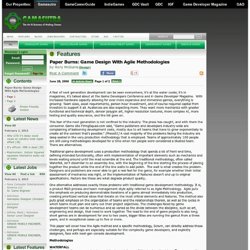 With increased hardware capacity allowing for ever more expansive and immersive games, everything is growing: Team sizes, asset requirements, person hour investment, and of-course required capital from investors to support it all. Audiences are also expecting more. They want more mechanics with greater functional and technical depth, denser polygon art, higher resolution textures, more complex AI, more testing and quality assurance, and the list goes on. This fear of the next generation is not confined to the industry. The press has caught, and with them the consumer. One alternative addresses exactly these problems with traditional game development methodology. Game design process. Step one: Setting up game develpoment Step two: Determinging Project Goals Step three: Game desigm- The creative side Step four: The technical side Step five: The finish line. 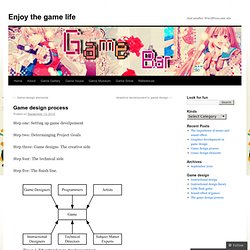 Please read that one for an up-to-date view of my thinking about empirical game design. An overview of the Iterative Game Design Process as we used in the game design workshop at Play4Agile 2011. Game design is unique as a design task. On one hand the properties of a game that makes it great can only be assessed by playing the game. On the other hand the designer cannot directly influence the gameplay experience — she only has access to the mechanics and the interface of the game.

My design method: Interweaving « #AltDevBlogADay. Warning: there might be a couple of light spoilers, but everything is in the trailers anyway so… nevermind that. 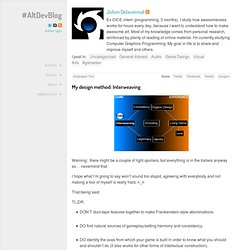 Lost Garden. [Mind-Speak] » Blog Archive » Project Aurora – Creating the Concept. If you’re like me, you love seeing how other people design. 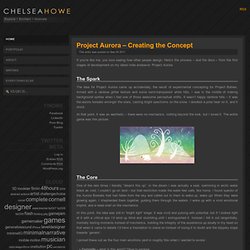 Here’s the process – and the docs – from the first stages of development on my latest indie endeavor: Project Aurora. The Spark The idea for Project Aurora came up accidentally, the result of experimental concepting for Project Babies. Armed with a rainbow glitter texture and some semi-transparent white hills, I was in the middle of making background sprites when I had one of those awesome perceptual shifts. It wasn’t happy rainbow hills – it was the aurora borealis amongst the stars, casting bright spectrums on the snow.

At that point, it was an aesthetic – there were no mechanics, nothing beyond the look, but I loved it. The Core. The Elusive “Quick Iteration”: Tips for Indie Devs « #AltDevBlogADay. From agile and scrum to extreme programming, everyone’s trying to nail down what it takes to iterate on products quickly and efficiently. 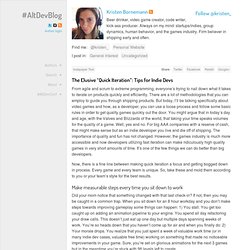 There are a lot of methodologies that you can employ to guide you through shipping products. But today, I’ll be talking specifically about video games and how, as a developer, you can use a loose process and follow some basic rules in order to get quality games quickly out the door. You might argue that in today’s day and age, with the Valves and Blizzards of the world, that taking your time speaks volumes for the quality of a game. Well, yes and no. For big AAA companies with a reserve of cash, that might make sense but as an indie developer you live and die off of shipping. Now, there is a fine line between making quick iteration a focus and getting bogged down in process. Make measurable steps every time you sit down to work Did your mom notice that something changed with that last check-in?

Board Game Design First Steps. Once you've completed (at least tentatively) the analysis phase of the process, it's time to begin to design your board game. 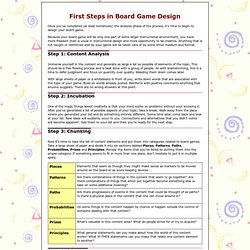 Because your board game will be only one part of some larger instructional environment, you have more freedom than is usual in instructional design and more opportunity to be creative. Anything that is not taught or reinforced well by your game will be taken care of by some other medium and format. Step 1: Content Analysis Immerse yourself in the content and generate as large a list as possible of elements of the topic.