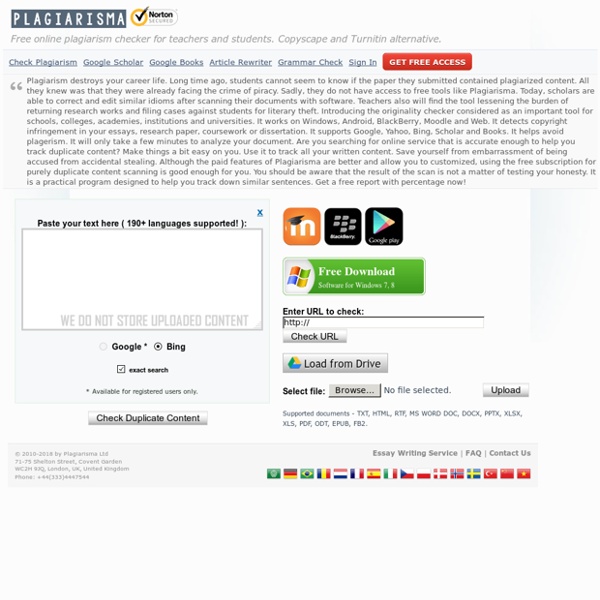 Download, Organize And Play Animated Ebooks With Koobits If you are tired of your dull and boring e-book reader, then it might be time to spice things up a notch and try something different. E-books have become more intuitive with the introduction of animated e-book versions that can now be played with portable devices such as the Nook tablet. If you are fond of such e-books and are looking to acquire something similar for your Windows desktop, then try Koobits. It is an e-book reader, organizer and downloader that comes with a visually appealing interface and numerous dynamic options. KooBits can open all major e-book formats such as PDF, XML, EPUB, HTML, KBJ, and others. Koobits provides numerous shelves for organizing various e-books.

PlagiarismDetect.com A few clicks and your text will be checked for plagiarism. Nothing can be easier. Let’s start! Firstly, you upload your text (paste it to the checking area or upload a file). Then the system breaks it into small linguistic units and checks it for similarities against all the websites that are open for indexation and also our private database. The Use of Literary Quotations and Allusions in Ray Bradbury, Fahrenheit 451 [ Hauptseite | Roman | Arbeiten ] Table of Contents 1. Beyond the Book Report: Ways to Respond to Literature Using New York Times Models Victor J. Blue for The New York TimesWord, a bookstore in Greenpoint, Brooklyn, provides guidance to browsers with irreverent “shelf talkers,” like this one for “The Book of Night Women,” by Marlon James.Go to related article » | Go to related slide show » Below, we present some alternatives to that classic classroom assignment, the book report. All of our ideas are inspired by The New York Times in some way, either because we’ve adapted an interesting format, or because we were inspired by an article, review, essay, interview or multimedia feature. Do you assign book reports, in any format, to your students?

78 Tools for Writing and Previewing Markdown Markdown is a text-based markup language created by John Gruber in 2004 as a way to write in an easy-to-read format that can be converted into HTML. It uses a very simple formatting syntax of familiar punctuation and characters, which makes writing content for the web a faster and more intuitive experience. As Markdown grows in popularity, new tools and applications have sprung up to cater to writing, converting and previewing the markup language. From tutorials, WordPress plugins and books to dedicated Markdown Service Tools for OS X, there is a wealth of excellent resources available. This post concentrates on 78 of the best tools and applications for writing and previewing Markdown, including resources for Windows, Mac OS X, iOS and the web. Are there any Markdown tools we may have missed?

Excellent iPad Apps to Create eBooks 1- Book Creator for iPad " The simple way to create your own beautiful iBooks, right on the iPad. Read them in iBooks, send them to your friends, or submit them to the iBookstore...." Excellent Video Clips on Plagiarism to Share with Your Students 1- What is Plagiarism 2- A Quick Guide to Plagiarism 3- Plagiarism: a film by Murdokh 4- Avoid Plagiarism in Research papers with paraphrases and quotations 5- Before he cheats: A teacher parody NEA Big Read Introduction to the Book The three main sections of Ray Bradbury's Fahrenheit 451 all end in fire. The novel focuses on Guy Montag, a fireman. In the first section, we discover that Montag is a professional book burner, expected to start fires instead of putting them out. For years he has done his job obediently and well. Then one day, he is called upon to burn the books of a Mrs.

Moglue: Create interactive ebooks and release as apps! Featured Post What it is: I never learned HTML, sure I know a few basics but nothing that will build me a good looking, functional website. Wix has long been my secret weapon. I use it often. In fact, it was how I built the Anastasis Academy website. Englishland April Fool’s Day is the 1st day in April. It is celebrated in the United States, England, France, Scotland, Italy, Spain, Portugal, Sweden, Germany and Norway. The custom of shouting “April Fool!”

Main / HomePage ePuper is a freeware tool for authoring epub files from web sources for windows. Basically ePuper was written to bring online newspapers to an offline ebook reader. ePuper has an interface you can create plugins for that converts your favourite web page to an epub file. ePuper is simple. ePuper is freeware. Plagiarism Checker A list of key features: 1. Billions of web pages Baldwin Library of Historical Children's Literature - Special and Area Studies Collections - University of Florida Smathers Libraries The Baldwin Library of Historical Children’s Literature in the Department of Special and Area Studies Collections at the University of Florida’s George A. Smathers Libraries contains more than 130,000 books and periodicals published in the United States and Great Britain from the mid-1600s to present day. The Library also has manuscript collections, original artwork, and assorted ephemera such as board games, puzzles, and toys. The Baldwin Library is known for comparative editions of books, with special emphasis on Robinson Crusoe, Pilgrim’s Progress, Aesop’s Fables, and Alice’s Adventures in Wonderland. The Library also has the largest collection of Early American Juvenile Imprints of any academic institution in the United States. Other strengths and distinctions of the Baldwin Library include: marginalia and inscriptions, the Hans Christian Andersen Awards Collection, Little Golden Books, religious tracts, and illustrated editions from the Golden Age of Children's Literature.