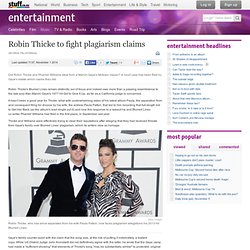 A court case has been filed by Gaye's estate which claims they did. 'Blurred Lines' Marvin Gaye plagiarism lawsuit to be settled in court - News - Music - The Independent. The family of Marvin Gaye claim that the hit track, also featuring Pharrell Williams, steals elements of the soul singer’s 1977 hit “Got to Give it Up”. 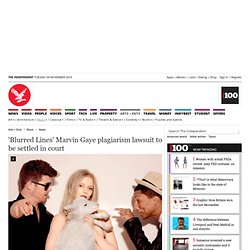 District Judge John A Kronstadt made the ruling after reviewing conflicting analyses by experts, hired by Thicke and Pharrell and by Gaye's children to evaluate the two songs. Thicke and Williams had sought a ruling on Thursday that “Blurred Lines” did not infringe on copyrights to the Gaye song. However, the judge determined there is a genuine dispute about whether several musical elements, including signature phrases, hooks, bass lines, keyboard chords and vocal melodies, are similar. In his ruling, Kronstadt limited the analysis to be made by a jury to how the compositions appear on sheet music, not how “Blurred Lines” and “Got to Give it Up” sound to listeners.

A trial is scheduled for 10 February in Los Angeles. Loading gallery. Blurred Lines Plagiarism Case Headed To Trial. A federal judge has ruled that t he plagiarism case against Robin Thicke and Pharrell Williams' hit Blurred Lines should go to trial. 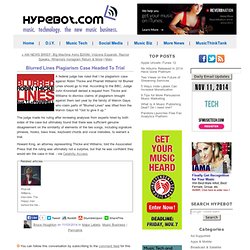 According to the BBC, Judge John Kronstadt denied a request from Thicke and Williams to dismiss claims of plagiarism brought against them last year by the family of Marvin Gaye, who claim parts of "Blurred Lines" was lifted from the Marvin Gaye hit "Got to give it up. " The judge made his ruling after reviewing analyses from experts hired by both sides of the case but ultimately found that there was sufficient genuine disagreement on the similarity of elements of the two songs, including signature phrases, hooks, bass lines, keyboard chords and vocal melodies, to warrant a trial.

Howard King, an attorney representing Thicke and Williams, told the Associated Press that the ruling was ultimately not a surprise, but that he was confident they would win the case in trial. - via Celebrity Access. Lines on Plagiarism Blur for Students in the Digital Age. JCDA-R_(Middle).pdf. Defining and Avoiding Plagiarism: The WPA Statement on Best Practices. Plagiarism. IA.pdf. Cobb Virtual Academy - Cobb County School District. As members of Cobb County School District, students have a responsibility to conduct themselves with the highest standards of honesty and integrity. 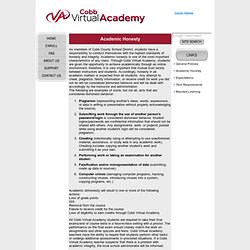 Academic honesty is one of the most important characteristics of any class. Through Cobb Virtual Academy, students are given the opportunity to achieve academically through an online environment; therefore, it is very important that mutual trust exists between instructors and students. Paul Robeson Library. What Is Plagiarism? Plagiarism Costs Degree for Senator John Walsh. 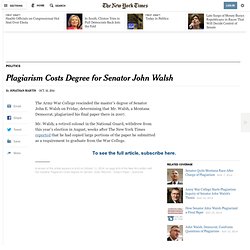 Walsh on Friday, determining that Mr. Walsh, a Montana Democrat, plagiarized his final paper there in 2007. Mr. Walsh, a retired colonel in the National Guard, withdrew from this year’s election in August, weeks after The New York Times reported that he had copied large portions of the paper he submitted as a requirement to graduate from the War College.

“The Army War College commandant notified Mr. The determination was made by an academic review board composed of faculty members at the college, in Carlisle, Pa. As with others who have had their degrees revoked, she said, Mr. In a statement, Mr. “Though I disagree with the findings made by the War College, I accept its decision with great humility and respect for the U.S. military,” Mr. When confronted by The New York Times about his plagiarism in July, Mr. Mr. After Mr. Plagiarism. What this handout is about. 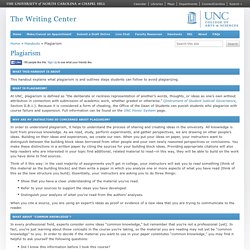 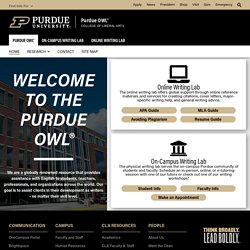 This resource offers advice on how to avoid plagiarism in your work. Contributors:Karl Stolley, Allen Brizee, Joshua M. PaizLast Edited: 2014-10-10 09:01:36 Research-based writing in American institutions, both educational and corporate, is filled with rules that writers, particularly beginners, aren't aware of or don't know how to follow. What is Plagiarism? — Plagiarism.org - Best Practices for Ensuring Originality in Written Work. Many people think of plagiarism as copying another's work or borrowing someone else's original ideas. 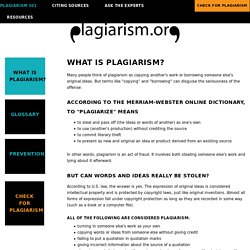 But terms like "copying" and "borrowing" can disguise the seriousness of the offense: According to the Merriam-Webster Online Dictionary, to "plagiarize" means to steal and pass off (the ideas or words of another) as one's ownto use (another's production) without crediting the sourceto commit literary theftto present as new and original an idea or product derived from an existing source In other words, plagiarism is an act of fraud. It involves both stealing someone else's work and lying about it afterward. But can words and ideas really be stolen?

According to U.S. law, the answer is yes. All of the following are considered plagiarism: