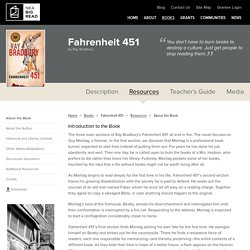 The novel focuses on Guy Montag, a fireman. In the first section, we discover that Montag is a professional book burner, expected to start fires instead of putting them out. For years he has done his job obediently and well. Then one day, he is called upon to burn the books of a Mrs. As Montag begins to read deeply for the first time in his life, Fahrenheit 451's second section traces his growing dissatisfaction with the society he is paid to defend. Montag's boss at the firehouse, Beatty, senses his disenchantment and interrogates him until their confrontation is interrupted by a fire call. Fahrenheit 451's final section finds Montag seizing his own fate for the first time. The book's three holocausts expand concentrically. 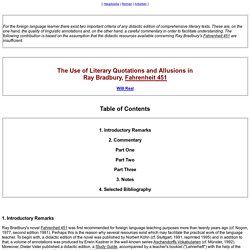 Introductory Remarks Ray Bradbury's novel Fahrenheit 451 was first recommended for foreign language teaching purposes more than twenty years ago (cf. Noçon, 1977, second edition 1981). All three publications contain linguistic annotations, which are more or less satisfactory, Kastner's being better than Vater's and the latter being better than Köhn's. 2. Motto: Juan Ramón Jiménez : Spanish poet (1881-1958); the motto sets the tone for unorthodox, non-conformist or even rebellious behaviour in the course of the novel. p. 5/p. 8: Guy Montag (page references are to the Cornelsen edition by Dieter Vater; cf. bibliography below): the protagonist's Christian name may refer to Guy Fawkes and his famous gun powder plot in order to kill King James I in 1605 ("Remember, remember the fifth of November"), whereas his family name seems to suggest a new beginning. Thsrs - The Shorter Thesaurus.

MLA Handbook - The Definitive Guide to Writing Research Papers. Baldwin Library of Historical Children's Literature - Special and Area Studies Collections - University of Florida Smathers Libraries. The Baldwin Library of Historical Children’s Literature in the Department of Special and Area Studies Collections at the University of Florida’s George A. 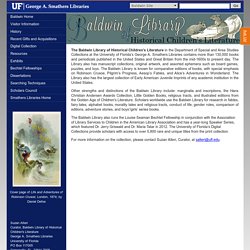 Smathers Libraries contains more than 130,000 books and periodicals published in the United States and Great Britain from the mid-1600s to present day. The Library also has manuscript collections, original artwork, and assorted ephemera such as board games, puzzles, and toys. The Baldwin Library is known for comparative editions of books, with special emphasis on Robinson Crusoe, Pilgrim’s Progress, Aesop’s Fables, and Alice’s Adventures in Wonderland. The Library also has the largest collection of Early American Juvenile Imprints of any academic institution in the United States. Other strengths and distinctions of the Baldwin Library include: marginalia and inscriptions, the Hans Christian Andersen Awards Collection, Little Golden Books, religious tracts, and illustrated editions from the Golden Age of Children's Literature. 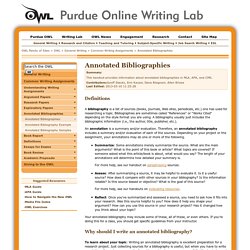 Contributors:Geoff Stacks, Erin Karper, Dana Bisignani, Allen BrizeeLast Edited: 2013-03-10 11:25:28 Definitions A bibliography is a list of sources (books, journals, Web sites, periodicals, etc.) one has used for researching a topic. Bibliographies are sometimes called "References" or "Works Cited" depending on the style format you are using. An annotation is a summary and/or evaluation. Summarize: Some annotations merely summarize the source.