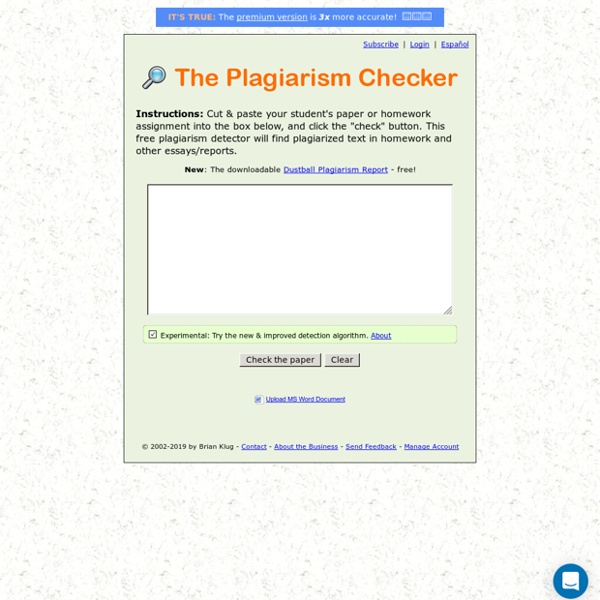 20 useful ways to use Padlet in class now Padlet is a web app that lets users post notes on a digital wall. The uses for this site in the classroom are virtually endless! There’s a good chance you’ve done the “write on a sticky note and put it on the wall” activity — or have seen it happen before. Padlet lets those sticky notes have images, links and videos AND be available with practically any Internet-ready device. It used to be blocked by my school’s Internet filter. PlagiarismDetect.com A few clicks and your text will be checked for plagiarism. Nothing can be easier. Let’s start!

13 killer Chrome apps to replace your desktop software When Tim Berners-Lee invented the first Web browser in 1990, it was just an application made to read HTML pages passively. Fast-forward to today, and the modern Web browser has become a powerful platform in itself—almost a miniature operating system, capable of running complex JavaScript code and interacting with Flash plug-ins. Indeed, Web pages have evolved into Web apps, to the point where we can do much of our productivity work in a browser window without ever having to invest in traditional desktop software. But how much work can you really do from a browser? Could you replace all of your desktop apps with Chrome extensions, and be none the worse for wear?

Harvard Education Letter Since she began ‘flipping’ lectures and homework assignments, high school science teacher Shelley Wright has noticed something: the number of students failing her course has dropped from the usual three to zero. Departmental exam scores are higher, too. Wright, who teaches grades 10, 11, and 12 at Cornerstone Christian School in Moose Jaw, Saskatchewan, is one of a growing number of converts to the practice of inverting—or flipping—the daytime class lecture, on the one hand, and nighttime reading and problem-solving homework, on the other.

Beginner's Guide to Rockets At this Web site you can study how rockets operate at your own pace and to your own level of interest. There is a lot of mathematics at this web site, so we provide background pages on many mathematical topics. The flight of the rocket involves the interaction of forces, so we include background pages on the fundamentals of forces. Aerodynamics plays a major role in the flight of toy rockets and in the generation of thrust for full scale rockets, so there are background pages devoted to basic aerodynamics . 20+ resources for engaging game-based learning Bringing aspects of games into the classroom can be highly motivational and engaging, making content stick. Here are some resources. (Public domain image via Pixabay.com) Our society thrives on games. Excellent Video Clips on Plagiarism to Share with Your Students 1- What is Plagiarism 2- A Quick Guide to Plagiarism 3- Plagiarism: a film by Murdokh

There is Such a Thing as a Free Lunch: 8 Free and Easy Ways to Begin Educating Innovatively I recently attended a conference where I ran into a couple out-of-touch old timers who wanted to explain to me why things are the way they are. The conversation went like this: The first guy said, “Ya know, nothing in life is free.” The next one chimed in, “Uh huh! Ya get what you pay for.” Followed by, “It takes a lot to bring schools into the 21st century. Expensive equipment. Charlie Chaplin Sir Charles Spencer "Charlie" Chaplin, KBE (16 April 1889 – 25 December 1977) was an English comic actor, filmmaker, and composer who rose to fame in the silent era. Chaplin became a worldwide icon through his screen persona "the Tramp" and is considered one of the most important figures in the history of the film industry.[1] His career spanned more than 75 years, from childhood in the Victorian era until a year before his death at age 88, and encompassed both adulation and controversy. Chaplin's childhood in London was defined by poverty and hardship. As his father was absent and his mother struggled financially, he was sent to a workhouse twice before the age of nine. When he was 14, his mother was committed to a mental asylum. Chaplin began performing at an early age, touring music halls and later working as a stage actor and comedian.

Free with No Registration Required You must have an OLD browser. The old crossword maker doesn't allow all of the new features like cool fonts, adding images, shadows, special colors, and much more coming in the furture like saving, and being playable online. You can upgrade your browser to IE 9+ or better yet, get the Google Chrome browser and enjoy all of those great features. Plagiarism Checker A list of key features: 1. Billions of web pages This tool has the ability to check plagiarism by matching your content against billions of webpages on the Internet. Once you upload your content, it will automatically run it against every existing content on the web within seconds, making it the most sophisticated yet fastest plagiarism scanner you'll ever come across in your lifetime.