Russian-oppostion-leader-boris-nemstov-shot-dead-street-article-1. Anti-gay crusader had 250-page FBI file. Fred Phelps, founder of he staunchly anti-gay Westboro Baptist Church, had a long and contentious relationship with the FBI, according to the late pastor’s newly released 250-page bureau file. 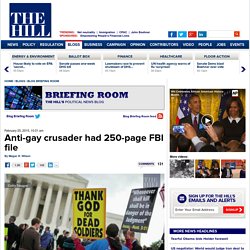 Phelps, who died in March 2014 at age 84, was known best for leading protests at funerals to highlight the church’s crusade against homosexuality. He also attempted a U.S. Senate run in 1992, gaining almost 31 percent of the vote in the Kansas Democratic primary, and launched three failed gubernatorial bids. This Billionaire Governor Taxed the Rich and Increased the Minimum Wage. The next time your right-wing family member or former high school classmate posts a status update or tweet about how taxing the rich or increasing workers' wages kills jobs and makes businesses leave the state, I want you to send them this article. 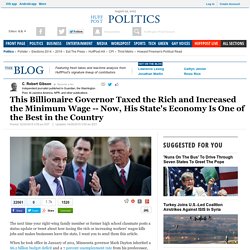 When he took office in January of 2011, Minnesota governor Mark Dayton inherited a $6.2 billion budget deficit and a 7 percent unemployment rate from his predecessor, Tim Pawlenty, the soon-forgotten Republican candidate for the presidency who called himself Minnesota's first true fiscally-conservative governor in modern history. Pawlenty prided himself on never raising state taxes -- the most he ever did to generate new revenue was increase the tax on cigarettes by 75 cents a pack. Between 2003 and late 2010, when Pawlenty was at the head of Minnesota's state government, he managed to add only 6,200 more jobs. During his first four years in office, Gov. Between 2011 and 2015, Gov. 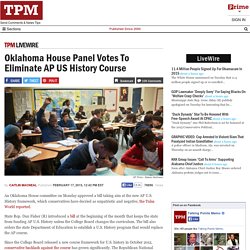 History framework, which conservatives have decried as unpatriotic and negative, the Tulsa World reported. State Rep. Dan Fisher (R) introduced a bill at the beginning of the month that keeps the state from funding AP U.S. History unless the College Board changes the curriculum. The bill also orders the state Department of Education to establish a U.S. Since the College Board released a new course framework for U.S. history in October 2012, conservative backlash against the course has grown significantly. Fisher said Monday that the AP U.S. The House Common Education Committee voted for the bill 11-4, with all Republicans voting for the legislation and all Democrats voting against it.

Where did it come from, and what are its intentions? The simplicity of these questions can be deceiving, and few Western leaders seem to know the answers. In December, The New York Times published confidential comments by Major General Michael K. Garbage's Shirley Manson writes open letter to Kanye West. Barack Obama: The Vox Conversation. LA Galaxy visit the White House and meet President Obama. Plaintiff in Obamacare case unaware Obamacare case would cause millions to lose coverage. The Supreme Court case that could dismantle Obamacare, King v. 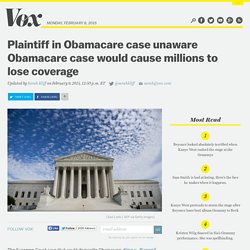 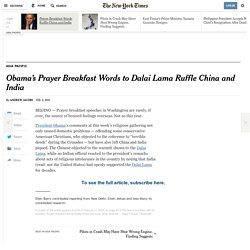 Not so this year. President Obama’s comments at this week’s religious gathering not only caused domestic problems — offending some conservative American Christians, who objected to the reference to “terrible deeds” during the Crusades — but have also left China and India piqued. The Chinese objected to the warmth shown to the Dalai Lama, while an Indian official reacted to the president’s remarks about acts of religious intolerance in the country by noting that India (read: not the United States) had openly supported the for decades.

For both India and China, Mr. Just over a week ago, Mr. Photo. EXCLUSIVE - Koch Brothers, Rick Scott And Jeb Bush Exposed In Florida Pipeline Scandal. Florida Attorney Steve Medina has been working on a case, pro bono, to expose the environmental corruption which has been taking place in Tallahassee and Putnam County, Florida. 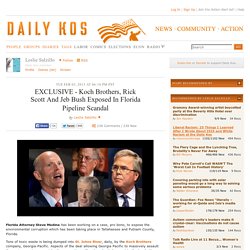 Tons of toxic waste is being dumped into St. Johns River, daily, by the Koch Brothers company, Georgia-Pacific. Aspects of the deal allowing Georgia Pacific to massively assault the environment, were misleading, sometimes illegal, and unbeknownst to the local citizens. Florida Governor Rick Scott and former Governor (and Republican presidential hopeful), Jeb Bush, are also involved. Aka 'The Republican Senator From Israel' Chris Christie Is Now Waging 23 Court Battles to Keep State Documents Secret. Israeli Officials Unable to Calm Democrats before Netanyahu's Speech. Last month, Speaker of the House John Boehner coordinated with Israeli Prime Minister Benjamin Netanyahu to allow him to speak to Congress in March about negotiations with Iran. 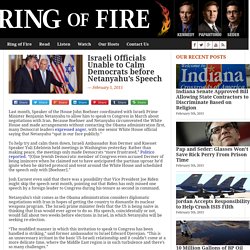 Because Boehner and Netanyahu circumvented the White House and made arrangements without contacting the Obama administration first, many Democrat leaders expressed anger, with one senior White House official saying that Netanyahu “spat in our face publicly.” To help try and calm them down, Israeli Ambassador Ron Dermer and Knesset Speaker Yuli Edelstein held meetings in Washington yesterday. 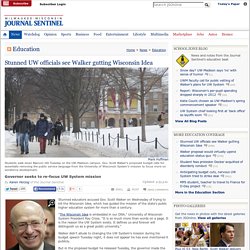 Iraq's Assyrian Christians Take Up Arms to Fight Islamic State. MANILA TRAINING CENTER, Iraq -- Hundreds of Christian men are picking up rifles for the first time at a former U.S. military facility in the hills of northeast Iraq and training to reclaim their towns from Islamic State militants who stormed the country last year. 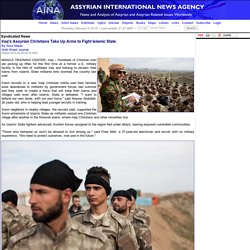