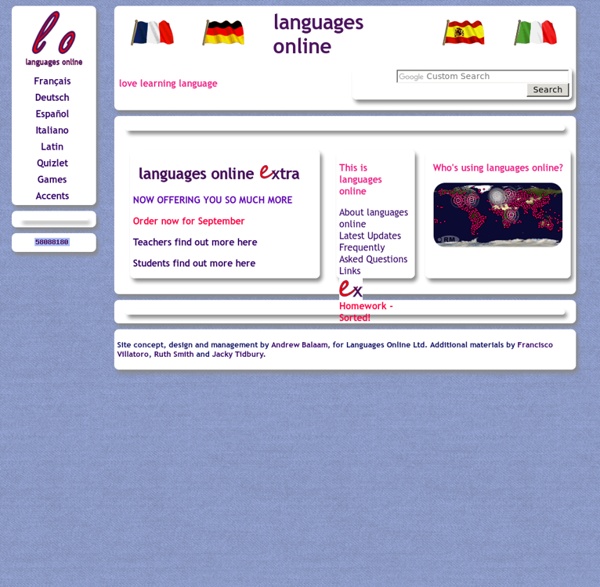 Articles for complete beginners in French (Fle A1) "You have been a fantastic teacher and a friend. My move to France would have been positively awful had I not had such a wonderful tuition by you. You are truly an energetic, interesting person who makes people at ease and comfortable in your company. Wo, Woher, Wohin > Useful: Contact us | Best resources | Most popular | All our lessons & exercises > German lessons & exercises: Abbreviations and acronyms... | Adjectives | Adverbs | Alphabet | Animals | Articles | Audio test | BE | BE, HAVE, DO, DID, WAS... | Banks, money | Bilingual dialogues | Business | Buying in a shop | Capital letters | Cars | Celebrations: Thanksgiving, new year... | Clothes | Colours/Colors | Comparisons | Compound words | Conditional and hypothesis | Conjunctions | Countries and nationalities | Dates, days, months, seasons | Dictation | Direct/Indirect speech | Diseases | Exclamative sentences! | Our German lessons and tests are 100% free but visitors must pay for Internet access.

Free French eBook and 5 French websites every French teachers should know! Salut! Hi everyone! If you teach French, you know how tough it can be to find resources for your classroom. Of course, I'm talking about QUALITY resources. Toms Deutschseite - Konjugation der Verben Aim of this section is to bring any verb in the correct form in the present tense: In English it's quite easy. You just have to add a "s" for "he/she/it" and for the rest you can take the infinitive. In German there is a different ending for almost every person. There are three groups of verbs: 10 important facts about Oktoberfest Oktoberfest is one of the more well-known festivals in Germany, but many international visitors are not aware of some of the basic facts about it. Here are some of the most important ones: 1. The festival is held in Munich on the Theresienwiese and is known locally as the ‘Wiesn’. The nearest U-Bahn station is also called Theresienwiese.

Français 1 Chabot In March 2015 Français 1- Unité 4--full unit exam review 61 terms added by MmeChabot In September 2014 French numbers 13, 14, 15, 16, 20-69 26 terms 9 Cool German Grammar Lessons Learned from Listening to Chima It’s pretty much impossible to go one day without hearing music. It’s everywhere: playing in shops, blasting out as someone’s ringtone or booming from a tricked-out car. It gets us psyched for adrenaline-filled action scenes in movies, and it melts our hearts as our favorite television characters confess their undying love for one another. But what if you could use music to help you learn German? 50 French Expressions and Slang to Sound Fluent MORE French Expressions & Slang Need more French expressions and slang to sound more fluent? These useful French expressions, words and slang are probably skipped in French class. We compiled a SECOND list of colloquial words you’ll hear in France.

Correct Use of German Prepositions There are several ways to express to in German. That means to is not always translated as zu, but can be translated as in, auf, an, nach, zu. Native speakers differentiate exactly where they go and express it with a different preposition. Luckily there are some rules, which are not too hard to remember. Use of Preposition Connected to the Place Questions in an Envelope Here's another activity/technique I got from the World Language Academy I attended this summer! I already used it with my combined German 3/4 class and it worked out really well! Check out Slide 152 from the Power Point Presentation. If you're doing a communicative activity with partners or small groups, Questions in an Envelope is a way for you to help scaffold the activity for students who need a bit of extra help.