The worlds only immortal animal 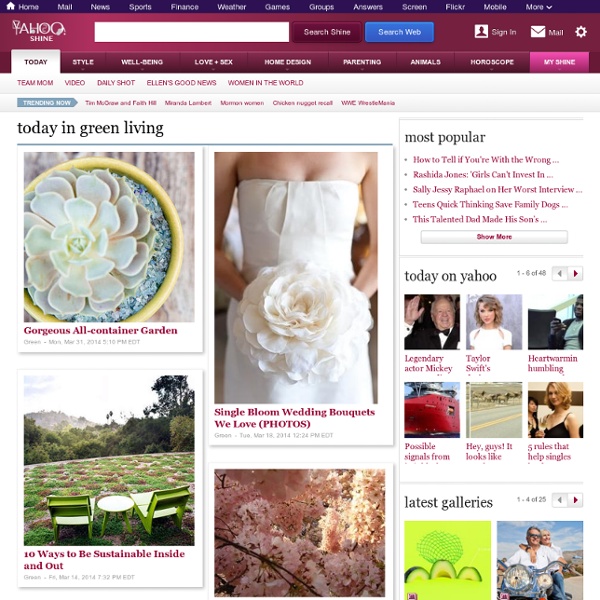 s Curiosities In an interesting experiment, this beekeeper decided to see what would happen if he put a glass jar over one of the holes in a beehive. Michael Jantzen - M-vironments - M-House Photo courtesy Michael Jantzen Relocatable M-vironments are made of a wide variety of manipulatable components that can be connected in many different ways to a matrix of modular support frames. The frames can be assembled and disassembled in different ways to accommodate a wide range of changing needs. Ulam’s Prime Number Spiral There is an infinite number of prime numbers, and yet the prime numbers themselves do not display any apparent pattern, nor does any formula exist that generates prime numbers. In fact, Legendre proved that there cannot be an algebraic function which always gives primes. However, prime numbers do exhibit a curious phenomenon when arranged in a spiral along with other consecutive integers, as in the figure to the right (in the figure, prime numbers are highlighted in white, twin primes are green, and Mersenne primes are red). The Phenomenon It was first noticed by the physicist Stanisław Ulam in 1963, when he got bored in a meeting and started doodling spirals of numbers. He noticed that, if he makes a spiral of consecutive integers, and circles only the prime numbers, strange diagonal “lines” of prime numbers emerge.

Top 10 Best Novels of the Last 20 Years Books The ten novels on this list all substantiate the belief that books are the most elastic, introspective, human and entertaining form of media that exist. Not movies, not music, not art, not the theatre. A famous author once said that novels are the best way for two human beings to connect with each other. Diavolino Diavolino ("little devil") is a low-cost, easy to build Arduino-compatible development board. Diavolino has the form factor of an Arduino Duemilanove or Arduino Pro, but with nicely rounded corners and a striking appearance. It's a low-profile through-hole version, with a simplified design. It's based on a ATmega328P microcontroller, and comes pre-flashed with the Arduino bootloader. Open source design, with bare basics hardware. Diavolino is sold as an easy to assemble "through hole" soldering kit [?].

10 Most Terrifying Places on Earth - Top 10 Lists Creepy There are places on this planet that are stranger than the most alien landscapes we have ever imagined. Places that make your skin crawl. Places that induce heavy breathing and paranoia, before anything has even happened. We walk the dark, dusty steps of old castles and houses. M house / Architecture W Architects: Architecture W Location: Nagoya, Japan Project Team: Michel Weenick, Yukiko Iwanaga, Brian White Client: Michel Weenick Project Year: 2005 Constructed Area: 320 sqmStructural Engineer: Structure NANAPhotographer: Andy Boone Located in one of Nagoya’s more attractive residential neighborhoods, but with only 2.5 meters of dead end street access and set on a difficult site that steps down from this access level a total of 7 meters, M-House is designed to both address the site conditions that rendered the site “unbuildable” by the local real estate community and provide for a simple, modern lifestyle for the American owner/architect and his family. In addition to the challenge provided by the site itself, the house also addresses the conceptual challenges of planning for a multi generational/multi national family, as well the even bigger challenge of securing precious views, sunlight, and breezes in the context of a cramped traditional Japanese neighborhood.

The Missing Manual for the Future Tim O’Reilly’s Four Cylinder Innovation Engine O’Reilly Media, is famous for is producing “missing manuals” for new technologies, but thinking of O’Reilly as just a publisher of books would be like saying Facebook is just a website (this came up in the discussion at Media Round Table at Web 2.0 Expo, NY, 2010). In recent weeks, I managed to catch Tim O’Reilly at several events, Maker Faire, Web 2.0 Expo, Hadoop World, and the free webcast Tim did with John Battelle on The Battle for the Internet Economy (although Tim spoke several other times during this period!). It occurred to me, as I immersed myself in the depth and breadth of innovation showcased and discussed at these events that Tim O’Reilly, and the O’Reilly team, are creating The Missing Manual for the Future.

40 Belief-Shaking Remarks From a Ruthless Nonconformist If there’s one thing Friedrich Nietzsche did well, it’s obliterate feel-good beliefs people have about themselves. He has been criticized for being a misanthrope, a subvert, a cynic and a pessimist, but I think these assessments are off the mark. I believe he only wanted human beings to be more honest with themselves. He did have a remarkable gift for aphorism — he once declared, “It is my ambition to say in ten sentences what others say in a whole book.” PCB design tools Officially supported CAD File Formats Nice, easy to use CAD/CAM software for PCB schematic and routing. We accept .BRD files for prototyping. Free, open source schematic capture and PCB routing. Were the people our parents warned us against A student fleeing from mounted police during an anti-war protest, c. 1970 50s HOME | READING LIST | NEWS | FILREIS HOME

The M-House Living out of the old LV is really only enjoyable up to a point. Though a few excellent apart-hotels have come to our rescue in New York and Barcelona, we particularly pity our executive friends flying into the City of London. What there is simply isn’t enough, and international commuters are forced to leave the City to find an adequate base. Which is why Tim Pyne (architect of the much-written-about m-house and founding creative director of 100% Design), along with various collaborators, has decided to come to the rescue. Their plan is to set up a number of m-house ‘scapes’ (encampments of up to 40 m-houses) in Europe. Rewriting the Mind – We Are What We Think - Evolving Beings The conscious mind is the part we are aware of – the part that does the thinking, worrying, planning and creating. It is a tiny part of the structure; it is the subconscious that is the looming bulwark, a massive entity with incredible powers and potentials. Its unique characteristic is that it can create anything that we command it to create, by virtue of the thoughts we think. If you believe that you cannot achieve something, if you believe that you cannot have something, the subconscious will create conditions, so that your beliefs are proved.