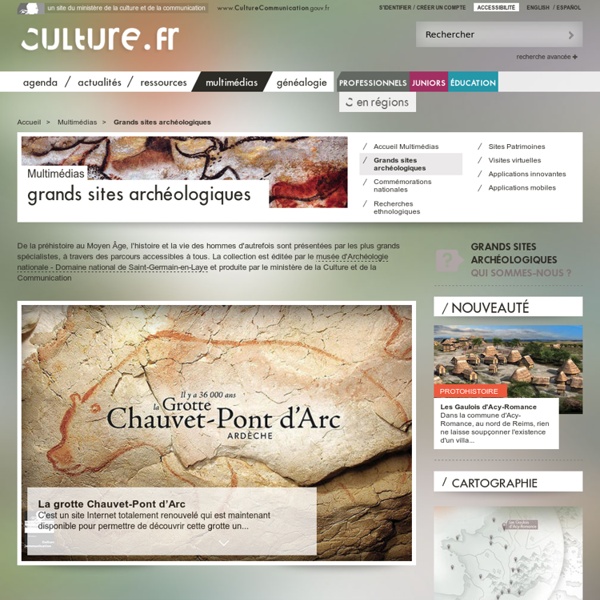 MapMaker Interactive YouTube Help The URL to a YouTube video must be the full length url. To ensure you are using the correct URL, visit your video on youtube.com. The URL to your video will be in your browser's address (see photo for an example) Knowth Flint macehead, Neolithic bowl, Ceremonial Axe This ceremonial macehead, found beneath the eastern chamber tomb at the great passage tomb at Knowth, in the Boyne Valley, is one of the finest works of art to have survived from Neolithic Europe. The unknown artist took a piece of very hard pale-grey flint, flecked with patches of brown, and carved each of its six surfaces with diamond shapes and swirling spirals. At the front they seem to form a human face, with the shaft hole as a gaping mouth.

Geoglyphs The most recently discovered anthropomorphic (human-like) geoglyph is the Marree Man of Finnis Springs, in the 'outback' of central South Australia. It is generally considered to be a recently created but fairly accurate representation of an Aboriginal hunter from the Pitjantjatjara tribe holding a throwing stick. The scale of the figure is enormous and is approximately 2,600 meters in length (not the 4.2 kilometres stated on Wikipedia). Sumerian Gods and Goddesses Sumerian Gods Is Anu holding the symbolic Holy Grail of a Bloodline he created? British Museum Kingdom of Hungary (1526–1867) The Kingdom of Hungary between 1526 and 1867 was part of the lands of the Habsburg Monarchy, while outside the Holy Roman Empire, and formally part of its successor, the Austrian Empire. After the Battle of Mohács, the country was ruled by two crowned kings (John I and Ferdinand I). Initially the exact territory under Habsburg rule was disputed because both rulers claimed the whole kingdom. This unsettled period lasted until 1570 when John Sigismund Zápolya abdicated as King of Hungary in Emperor Maximilian II's favor.

100 Amazing How-To Sites to Teach Yourself Anything Learning new skills and expanding your knowledge doesn’t have to cost you an arm and a leg. There are loads of free resources on the Web that can help you find instructional videos, tutorials and classes to learn a wide variety of skills from fixing basic car problems to speaking another language. With 100 sites to choose from, you’re bound to find something here that will help you learn just about anything you could want. General Tutorials Wan Muhuggiag (Muhjaij) Mummy, Tashwinat, Libya The Wan Muhuggiag Mummy, on display at the Assaraya. Discovery: The Tashwinat Mummy is a small mummy of a child, discovered in a small cave in Wan Muhuggiag, in the Acacus massif (Tadrart Acacus), Fezzan, Libya, by Professor Fabrizio Mori in 1958. The mummy is currently on display at the Assaraya Alhamra Museum (gallery 4) in Tripoli.

El asombroso disco genético precolombino de Jaime Gutierrez-Lega NOTE: In an earlier version of this post I mentioned that I had been unsuccessful at contacting Dr. Vera M. F. Hammer to get her comments on the Genetic Disk. After this post was published, and through the wonders of twitter, I was able to get in contact with her and she gave me some great insights into her involvement with the disk.