Turn an Old Computer into a Networked Backup, Streaming, or Torrenting Machine with FreeNAS 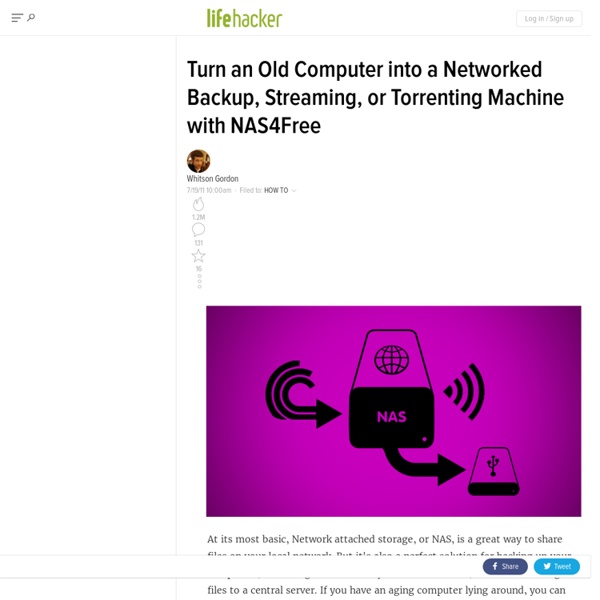 Is there a way of installing FreeNAS without a cdrom? I have got usb sticks handy that I could use maybe use unetbootin? Unetbootin has FreeNAS in it, but I got nothing but trouble from that version. You can try, but I don't know if it'll work. Do you really have NO CD drives? You can always burn the live cd, Install it from the live CD onto a flash drive (on any computer), then install it from the flash drive to the hard drive of a NAS...

Should I Run a Second Operating System in a Virtual Machine or Dual Boot? Dear Lifehacker, I've seen you talk about running Windows on a Mac by dual booting, as well as dual booting Windows 8 alongside Windows 7. But you've also talked about how to run Windows 8 in a virtual machine. If I want to run a second operating system, which is better? Dual booting or virtualizing? How to Automatically Download TV Shows as Soon as They've Aired (or Turn Your PC into a TiVo) Kinja is in read-only mode. We are working to restore service. Is there anyway you can explain further on what to do, this has gotten me intrigued.

How to Turn Your Computer into a Retro Game Arcade While I've never heard the term "freezes" for save states, they are a very useful feature. However, a word of caution — be careful to not overuse them. They can really cheapen a game if you use them too much.

How I Built the Media Center of My Dreams for Under $500 Kinja is in read-only mode. We are working to restore service. No TV tuner card...? I realize that it adds expense, but it seems worth it considering that a lot of cable companies charge you monthly to rent their box. With my current company, I could go from $15/month for an HD box, to $2/month for a CableCARD - the $13/month I save means that this thing will eventually pay for itself, or at least for some of the premium streaming subscriptions I buy for it. What Is UPnP and How Do I Use it to Stream Media to My TV? Hmm, I must have been looking at the wrong page when I found it. It said it still only supported a limited number of devices. This looks like a great solution for Windows! The great thing about it is that there is no having to fool around with finding proper codecs for Windows; the installation package comes with the appropriate MEncoder, FFMpeg, TSmuxer etc packages to support transcoding of formats that the front end player won't natively play.

Hotspot (Wi-Fi) A diagram showing a Wi-Fi network Hotspots may be found in coffee shops and various other public establishments in many developed urban areas throughout the world. Public park in Brooklyn, NY has free Wi-Fi from a local corporation Take.fm Is an Extremely Polished Movie Torrent Indexer @JakeWharton: Somebody has to upload them. This is a brand new site, you can't expect a huge library just yet. Look at coda.fm, it's just as polished and has a pretty large library. How to Get Motivated: A Guide for Defeating Procrastination Followup to: How to Generally Reduce Procrastination and How to Stop Procrastinating Right Now UPDATE: The poster has been updated and is now available as a full-sized poster. Jump down to the end if you want the download links. Two of my recent posts were meant to highlight clear, actionable things we can do to defeat procrastination – whether it’s general life and environment changes or things that can be done immediately – based on The Procrastination Equation by Piers Steel.

Power on Computer from Internet Now that we live in the broadband era, working in an Internet enabled environment has become a daily routine. It seems that our computers breathe though the Internet connection. Need a new software? Check Internet? Could an external hard drive run games? - Page 2 - Storage I've got all of my games on a 2 terra HDD (2000 gigs) and every thing works extremely well for me, with the help of some programs i made to go along with it. I've got a program that replaces the shortcuts, adding a quick start up routine so that the games work correctly when going from computer to computer. The program simply checks the current computers registry keys upon start up, then add the appropriate registry keys, which i've manually added to .reg files for each of my games. So if they current computer doesn't have the right keys, they are installed, and the program does account for drive name changes.

Turn Your Wall into an Awesome DIY Projector Screen for Less Than $50 You guys should consider mentioning what I consider the easiest, cheapest, highest quality screen out there, which apparently noone ever knows of. Magic words? Home Depot SKU 174-278 You get a Do-able board, which is similar to 1/8" thick, stiff vinyl, and without painting, treating, or anything, you can just start projecting an awesome quality image onto it. You can even have the friendly folks at Home Depot cut it for you so you have less work to do. Just Buy, Hang, and Enjoy. Turning on computers remotely Posted by Steve on Wed 20 Apr 2005 at 08:42 To save power it's often useful to turn systems off, but of course when you do that you cannot use them! This is especially frustrating when you turn off a machine which is physically remote from you, but it doesn't need to be. Many modern PCs have the ability to be remotely "woken up" and turned on.

10 Ways To Speed Up Torrent Downloads Torrent users would attest to the fact that half of our time is spent looking for ‘healthy’ torrents and the other half trying to download (and a bit of upload too) at the maximum speed. The former is mandatory; the latter thankfully is within the realm of tweaking. If you are the one who thinks that your torrent download speeds could do with a boost then keep reading. Below, you’ll find a few tips on how to speed up torrent download speed. And if you’re new to Torrenting, don’t forget to check out the official MUO Torrent guide.