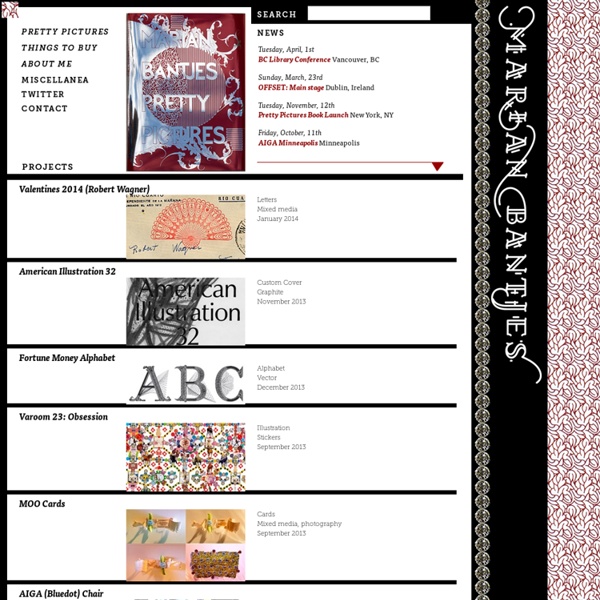 Last year I came into possession of a box of fan mail to Robert Wagner sent in 1957. It contained envelopes from all around the world, comprising about 150 envelopes with letters, about 250 envelopes only and about 30 envelopes with letters that had never been opened. I decided to make my 2014 Valentines "Letters to Robert Wagner." Each envelope seemed to be its own piece of art. The handwriting, the placement and layout of address, stamp and cancellation stamp varied widely from envelope to envelope. To this I added my own stamp that said "Timeless Love" – sometimes to the front of the envelope and sometimes to the back, depending on how it would interact or interfere with the original design.

Lucian Bernhard The Priester Match poster is a watershed document of modern graphic design. Its composition is so stark and its colors so starling that it captures the viewer's eye in an instant. Before 1906, when the poster first appeared on the streets of Berlin, persuasive simplicity was a rare thing in most advertising: posters, especially tended to be wordy and ornate. No one had yet heard of its young creator, who, thanks to this poster, was to influence the genre of advertising know as the Sachplakat, or object poster. Over the course of his career, which progressed from the turn of the century to the 1950s, Lucian Bernhard became a prolific designer not only of innovative posters but of trademarks, packaging, type, textiles, furniture, and interior design. From his studio in New York City (he left Berlin in 1922), he developed some of the most recognizable American business advertising and trademarks, for such clients as Cat's Paw, ExLax, and Amoco.

Edward Johnston Edward Johnston, 1902 Early life[edit] The family returned to England in 1875. With his father seeking work, and his mother ill, Johnston was raised by an aunt. He was educated at home, and enjoyed mathematics, technology, and creating illuminated manuscripts. Adrian Frutiger Information about the typeface designer Adrian Frutiger and his fonts. Adrian Frutiger was born in 1928 at Unterseen near Interlaken, Switzerland. After an apprenticeship as a compositor, he continued his training in type and graphics at the Zurich School of Arts and Crafts (Kunstgewerbeschule) from 1949 to 1951, being taught by two renowned professors, Alfred Willimann and Walter Käch. Frutiger went to Paris in 1952 and worked as typeface designer and artistic manager at Deberny & Peignot.

Bob Cobbing Bob Cobbing (30 July 1920 – 29 September 2002) was a British sound, visual, concrete and performance poet who was a central figure in the British Poetry Revival. Early life[edit] Cobbing was born in Enfield and grew up within the Plymouth Brethren. He attended Enfield Grammar School and then trained as an accountant. He later went to Bognor Training College to become a teacher. André Baldinger André Baldinger 2000 The Newut family is a new Grotesque in which the capitals are designed to be the same height as the lowercases. You can chose from three variationes: Classic, Tip or Plain. Each variation has three weights, Light, Medium and Heavy.