How to Set Up and Run a Mystery Skype Session 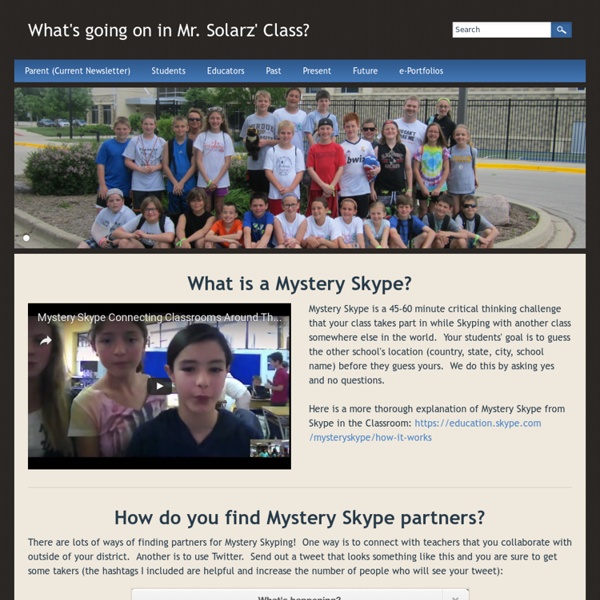 Teacher's Guide to Creating A Connected Classroom June 6, 2014 A connected classroom is a learning environment that is open to the outside world. One in which students get engaged in real life authentic learning that starts within their classroom and extends to reach other global learners. With the widespread of internet connection and web 2.0 technologies, creating a connected classroom becomes way easier than any time before.

5 of The Best Educational Websites for Learning A New Language October 15, 2015 language learning has never been this easy especially with the proliferation of web technologies and mobile apps that enable learners to learn a new language right from the comforts of their own places. From automated language softwares to online tutors available 24/7, learning a new language is no longer a matter of resources availability but rather a will availability. There is now an abundance of digital materials to use in your language class to enhance your language teaching. More importantly, these resources could also be used by students independently to pick up a new language at their own convenient pace. We have already featured a collection of Android and iPad apps to use for this purpose and today we are sharing with you what we think are the best platforms for learning a new language. Check them out below and share with us your feedback.

The Death Penalty Worldwide According to Amnesty International, 140 countries have abolished the death penalty. In 2012, only one country, Latvia, abolished the death penalty for all crimes. In 2013, 22 countries around the world were known to have carried out executions and at least 57 to have imposed death sentences. See also U.S. Figures. 5 of My Favorite English Games for ESL Students I saved the best for last. My students requested this game more often than any other game we ever played. It's based on the old drinking game "Ring of Fire," modified for the classroom. Materials needed:A standard deck of playing cards, a whiteboard, 20-30 small slips of blank paper, and a bowl.

High-achieving teenagers Presenter: Next on the programme we have an interview with someone who has been writing a book about high-achieving teenagers. Welcome, Louise Hardy.Louise: Hi, it’s lovely to be here.Presenter: Louise, many of these teenagers who have achieved success and fame early on, have done so through using new technology, haven’t they? Through blogging or using YouTube or Twitter?Louise: Absolutely, and the greatest example of this is Justin Bieber. As I think everyone on the planet knows, he started off by posting videos on YouTube at the age of 14 and was spotted by a talent scout who worked with the R&B singer Usher. After that he very rapidly became a worldwide sensation.Presenter: I heard that last year he was said to be more influential than Obama!

Mystery Skype Jobs Created by My Students My students during a call Last year was my personal best for Mystery Skype. We did one almost every week, and by we I mean my incredible students. They took ownership and pride in ding the calls quickly, professionally, and efficiently, and I often stood back in awe watching them unfold. My kids were Mystery Skype masters by the end of the year and I look forward to start over with a new group of 26 students this year. So it was only natural for my students to develop the original jobs into something that worked better for them.

SVOMPT - word order in English SVOMPT rule is one of the most important rules in English. If students learn to follow this rule, their English will improve dramatically, and they will be understood. Once a student knows some words and follows the SVOMPT rule, we can say that he/she can speak English. I love Darren Crown’s explanation of the origin of the SVOMPT word order. In his humorous book “Angličtina na rovinu” he writes that English was first used by a primitive tribe whose members did not want to use their brain too much and thus they created a word order which is always the same – Subject, Verb, Object, adverbs of Manner, adverbs of Place and adverbs of Time. So let´s stop looking for some complicated explanations and let´s think like the primitive barbarians and stick with the SVOMPT word order.

Use of capital punishment by country The following is a summary of the use of capital punishment by country. Capital punishment in the world (by country not by population)[edit] Capital punishment has been used in almost every part of the world, but in the last few decades many countries have abolished it. The 50 most important English proverbs What are proverbs? Every culture has a collection of wise sayings that offer advice about how to live your life. These sayings are called "proverbs". How can you use proverbs to learn English? It's good to know the really common English proverbs because you hear them come up in conversation all the time. Sometimes people say the entire proverb to give advice to a friend.

The 8 Minutes That Matter Most I am an English teacher, so my ears perk up when writers talk about their process. I've found the advice handy for lesson planning, too. That's because both writing and planning deal with craft. In writing, you want your audience to be absorbed.