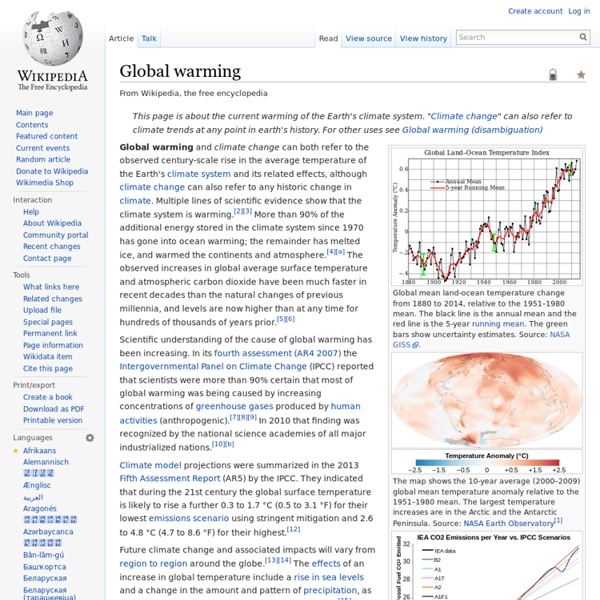 Global mean land-ocean temperature change from 1880 to 2014, relative to the 1951–1980 mean. The black line is the annual mean and the red line is the 5-year running mean. The green bars show uncertainty estimates. The map shows the 10-year average (2000–2009) global mean temperature anomaly relative to the 1951–1980 mean. Fossil fuel related carbon dioxide (CO2) emissions compared to five of the IPCC's "SRES" emissions scenarios. Global warming and climate change can both refer to the observed century-scale rise in the average temperature of the Earth's climate system and its related effects, although climate change can also refer to any historic change in climate. Scientific understanding of the cause of global warming has been increasing. Climate model projections were summarized in the 2013 Fifth Assessment Report (AR5) by the IPCC. Observed temperature changes Earth has been in radiative imbalance since at least the 1970s, where less energy leaves the atmosphere than enters it.

How cold is Europe? Cold enough for the Danube River to freeze Just how extraordinary has this winter been in Europe? The Danube River has frozen, for one. Europeans have been shivering under a blanket of cold air that has sent temperatures plummeting and snows drifting. Across the continent, hundreds have died from exposure to the cold. The Danube's freezing is just one of many severe winter events in the continent this year. At least four Balkan nations suspended shipping on the Danube on Feb. 14 because of heavy ice on the river, according to news reports. Keeping Europe frozen is a climate pattern called a "Russian Winter." The Danube flows through 10 countries, so precise records of its last freezing are not easy to come by. "I looked back over 20 years and found a few significant cold snaps, but I didn't find anything quite as strong as this one," Andrews told OurAmazingPlanet. On Jan. 13, 2003, the weather in Belgrade dropped to a low of minus 11 degrees Fahrenheit (minus 24 degrees Celsius). "We're talking pretty darn cold here," Andrews said.

RealClimate by Eric Steig Along with various Seattle business and community leaders, city planners and politicians, a large group of scientists from the University of Washington got a chance to preview the new film, An Inconvenient Truth, last week. The film is about Al Gore’s efforts to educate the public about global warming, with the goal of creating the political will necessary for the United States to take the lead in efforts to lower global carbon emissions. It is an inspiring film, and is decidedly non-partisan in its outlook (though there are a few subtle references to the Bush administration’s lack of leadership on this and other environmental issues). Since Gore is rumored to be a fan of RealClimate, we thought it appropriate to give our first impressions. Much of the footage in Inconvenient Truth is of Al Gore giving a slideshow on the science of global warming. How well does the film handle the science? There are a few scientific errors that are important in the film.

Stop climate change Deeply complex, the climate system drives wind, water, and warmth around our beautiful blue planet, nurturing all life. But now our climate is changing fast. The cause is an old, broken energy system that pollutes our air and water, drives inequality and destroys priceless landscapes. We really have to change; we have only a limited time to act. Join us as we fight to end polluting coal, oil, gas and nuclear projects. Climate affects all life on Earth Our climate is the engine for life support systems that sustain and nurture us all. The climate is changing fast Sea levels are rising, glaciers are melting, and coral reefs are bleaching. Climate change threatens to unravel Earth's complex web of life, and puts livelihoods, coastal cities and food production at risk. The cause of climate change is certain A dirty energy system, fuelled by coal, oil, gas and nuclear power, has failed us. The polluters profit, while the rest of us pay the price. 100% renewable energy is the key

Lake Michigan mostly frozen with ‘shelf’ ice BY HANNAH LUTZ February 14, 2014 1:42PM In this Dec. 26, 2013 photo provided by the U.S. Coast Guard the icebreaker Mackinaw maintains a shipping lane on the St. storyidforme: 62095103 tmspicid: 22412113 fileheaderid: 10712332 Updated: March 17, 2014 11:28AM Lake Michigan looked a bit like a giant ice skating rink this week. As of Thursday, more than 80 percent of the water was frozen. But those who want to practice their triple axel on the lake should think twice. It is still unsafe to walk on, National Weather Service Meteorologist Kevin Birk said. “There have even been cases when the winds will shift, and the ice itself will move,” Birk said. Ice coverage for the five great lakes combined reached about 88 percent Thursday, according to according to the Great Lakes Environmental Research Lab. The “shelf” ice on Lake Michigan is much weaker than the sheet ice on inland lakes, officials said. “It’s not stable and cave-ins have occurred recently. But Gill said the ice isn’t all bad.

Goals for a Critical Thinking Curriculum An Outline of Goals for a Critical Thinking Curriculum and Its Assessment 1Robert H. Ennis, University of Illinois, UC (Revised 6/20/02) E-mail: rhennis@uiuc.edu Web site: Critical thinking, as the term is generally used these days, roughly means reasonable and reflective thinking focused on deciding what to believe or do. 2 In doing such thinking, one is helped by the employment of a set of critical thinking dispositions and abilities that I shall outline, and that can serve as a set of comprehensive goals for a critical thinking curriculum and its assessment. It is only a critical thinking content outline. Examples, qualifications, and more detail can be found in some items listed at the end. Dispositions Ideal critical thinkers are disposed to 1. 2. 3. Abilities Ideal critical thinkers have the ability to (The first three items involve elementary clarification.) 1. 2. 3. (The next two involve the basis for the decision.) 4. 5. 6. 7. a. b. 8. 9. b. c. 10.

Cool Antarctica, pictures of Antarctica, information and travel guide Lake Superior nearing rare ice-over By John MyersForum News Service Posted: 02/06/2014 12:01:00 AM CST | Updated: 3 months ago DULUTH, Minn. -- A frigid winter is pushing Lake Superior toward a complete ice-over for the first time since 1996, though there's still a ways to go before you can skate from Duluth to the Soo Locks. Lake Superior had at least some ice across an estimated 91 percent of its surface as of Thursday, according to the Great Lakes Environmental Research Laboratory. That compares with the 40-year average annual Lake Superior ice coverage for February of just 30 percent. George Leshkevich has been tracking Great Lakes ice for the National Oceanic and Atmospheric Administration Great Lakes Environmental Research Laboratory since 1973. So far, this winter has had among the most rapid ice buildups of his tenure. The widespread ice in January and early February this year "wouldn't have been anomalous back in the '70s or with some of the winters in the mid-'90s.

UK | Scotland | Seaweed farms 'could fuel future' Pilot seaweed and algae farms are needed to assess Scotland's marine biomass potential, experts have urged. The recommendation comes in a report on using biomass for heating and fuel while avoiding the use of valuable agricultural land. Scientists want to see pilot farms and research into the most energy-rich types of seaweed. The report was carried out by the Scottish Association for Marine Science for The Crown Estate. Prof Mike Cowling, science and research manager at The Crown Estate, said: "Given Scotland's rugged western coastline and island groups, and relatively clean seas, it is sensible to examine the farming of seaweeds and sustainable harvesting of natural supplies as a source of energy, to heat our homes and fuel our vehicles. "Heating and transport make up around three quarters of our energy use so it's vital that we find new ways of meeting that demand.