Activities for correcting writing in the language classroom 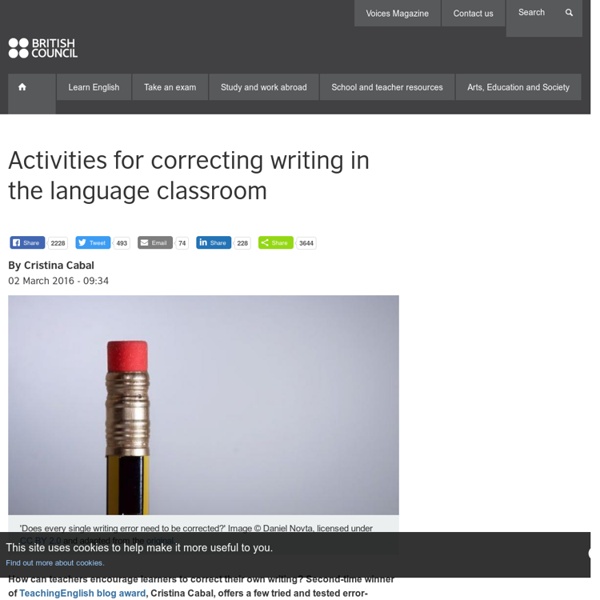 How can teachers encourage learners to correct their own writing? Second-time winner of TeachingEnglish blog award, Cristina Cabal, offers a few tried and tested error-correction activities. Does every single writing error need to be corrected? In the learning of a second language, this is a question that stirs up great controversy. While it is true that most spelling errors will disappear as learner proficiency increases, there are some persistent errors – mainly grammatical – which remain despite repeated efforts to correct them. In the following collection of error-correction activities for writing, the main aim is to get students to identify and correct writing errors taken from their own essays. The activities are fun and highly motivating, and because they are fast-paced, I would suggest going through the errors with the whole class a second time at the end to reinforce learning. Use 'grass skirts' This activity is a lot of fun. Use sticky notes Use slips of paper Correct or incorrect?

A few discussion activities for English language students What discussion activities work in class? Tekhnologic, winner of the British Council’s Teaching English blog award for a post on setting discussion goals, shares a few ideas. A discussion can bring out your students’ interests and motivate them; it’s a chance for them to talk about the things they really care about. Giving and justifying opinions in English can also bring students a sense of accomplishment, as they are using the language to express complex ideas. Discussion activities encourage critical thinking, and are therefore excellent preparation for speaking tests, such as IELTS or TOEFL, which partly examine the ability to express and justify opinions in English.

Why is English so weirdly different from other langu... English speakers know that their language is odd. So do people saddled with learning it non-natively. The oddity that we all perceive most readily is its spelling, which is indeed a nightmare. In countries where English isn’t spoken, there is no such thing as a ‘spelling bee’ competition. For a normal language, spelling at least pretends a basic correspondence to the way people pronounce the words. How to Write a Friendly Letter (with Sample Letters) Edit Article Four Methods:Sample LettersBeginning the LetterDrafting the BodyClosing the Letter Texting and instant messaging are common ways of communicating with friends these days, but writing a letter is a traditional, effective way of bringing a smile to someone's face. Whether you write a letter using email or mail it the old fashioned way, the form is the same: a friendly letter should include a salutation, inquiries about your friend, news about your life and an appropriate closing. Ad

Responding to students’ writing I have called this post responding to writing, rather than error correction on writing, as I believe that there is a lot more to responding to written work than simply correcting errors. To begin with, it is very important to respond to the content of the writing as well as the form. Otherwise we risk being like this teacher:

The Coop Times All stories written in this game are automatically published to The Coop Times newspaper - read them here. By Adam Carr - @2HitAdam with special thanks to Omeed Dariani, Jola Pez and Matt Carr for submitting extra prompts! Music "Big Fish" and "Full Hand" by playonloop.com CC BY 3.0 If you've enjoyed my game and it's within your means, please consider giving back <3 I'm near broke at the moment, and donations help me keep making these games!

The full transcript of Michelle Obama's powerful New Hampshire speech My goodness! You guys are fired up! Well, let me just say hello everyone. I am so thrilled to be here with you all today in New Hampshire. Local Hero Local Hero is a 1983 British comedy-drama film written and directed by Bill Forsyth and starring Peter Riegert, Denis Lawson, Fulton Mackay, and Burt Lancaster. Produced by David Puttnam, the film is about an American oil company representative who is sent to the fictional village of Ferness on the west coast of Scotland to purchase the town and surrounding property for his company. For his work on the film, Forsyth won the 1984 BAFTA Award for Best Direction. Plot[edit] Upon arriving in Scotland, Mac teams up with local Knox representative Danny Oldsen (Peter Capaldi). During a visit to a Knox research facility in Aberdeen, Dr Geddes (Rikki Fulton) and his assistant Watt (Alex Norton) inform them about the scope of the company's plans, which entail replacing Ferness with the refinery.

On the over-use of concept-checking questions: part 1 There aren’t many things that I think should be comprehensively banned from EFL classrooms, but the use of closed CCQs (Concept-Checking Questions) for items of vocabulary is one! For those of you unfamiliar with CCQs, they seem to have come into the ELT mainstream via International House and the very early teacher training courses offered there, and have gone on to become part of what is now widely considered to be CELTA orthodoxy. The basic idea is that simply explaining what something means is insufficient and therefore teachers need to ask their students questions to check whether or not they’ve actually grasped the ‘concepts’ that have been laid out for them. CCQs tend to be closed yes / no questions and just to be clear, I’m not opposed to their use in all circumstances. I used to have really long hair. I used to smoke a lot more.

English Vocabulary Quizzes Using Images a4esl.org English Vocabulary Quizzes Using Images Quizzes to Help You Learn and Review Vocabulary This is a part of The Internet TESL Journal's Activities for ESL Students Trump recorded having extremely lewd conversation about women in 2005 In this video from 2005, Donald Trump prepares for an appearance on “Days of Our Lives” with actress Arianne Zucker. He is accompanied to the set by “Access Hollywood” host Billy Bush. The Post has edited this video for length. (Obtained by The Washington Post) Disney's 'Brave' Video Writing Prompts K-2: Princess Comparison When you think of a prince or princess, what do they usually look and act like (either write out or draw your answer)? How are Merida and her brothers different from your original picture? 3-5: Family Expectations Like Merida, people of all ages face family expectations for who they are and how they should behave. Do you remember a time that your family expected you to do something or behave in a way you didn't want to?

Our Favourite Online Course Providers - Active English We all know that a good quality teacher development course is a worthwhile investment to give your teaching practice and career a boost. However, what happens when the city you live in or your busy timetable makes attending face-to-face classes impossible? Many teachers these days are turning to online education as a viable option that allows them to access quality training from anywhere at almost any time.

10 Illustrated English Idioms That Will Make Your Life Easier For many people learning English for the first time it can be daunting and complex language to master. Lots of silent letters, complex spellings and odd expressions which often go over the heads of most non-English speakers. To make learning English a little easier, Irish illustrator Roisin Hahessy has created some wonderfully simple yet funny pictures to help make things a little clearer.