Languages - French: All you need to start learning French 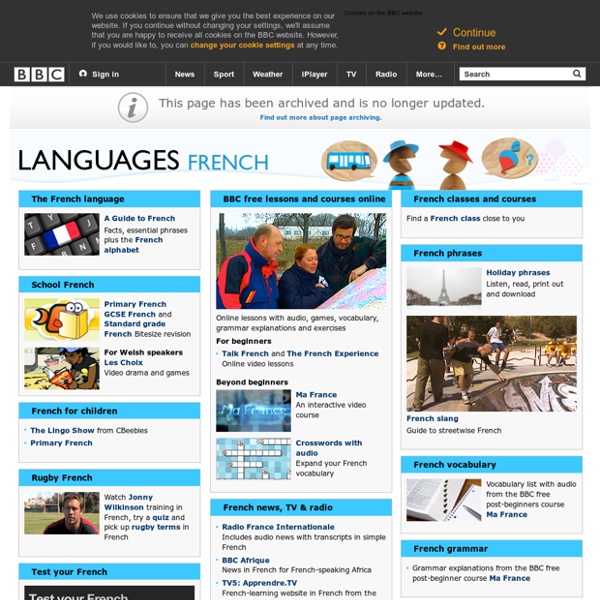 Basic French – Learn French Online Course Description French is spoken by millions of people in many countries around the world and is a very popular second language to learn. ALISON's free online course is a series of engaging video lessons for beginners that introduces the learner to various aspects of the French language including basic French vocabulary and grammar. By studying this French course you will quickly pick up conversational French that will help you deal with everyday situations you may find yourself in when you visit a French speaking country. ALISON's online course will help you learn French online and will be of great interest to all learners who want to pick up basic French language skills. To qualify for your official ALISON Diploma, Certificate or PDF you must study and complete all modules and score 80% or more in each of the course assessments.

Master 50 of the Most Common Irregular Past Participles in French with This Guide The French love to live for the present. That must be why they made talking about the past so difficult! French learners spend months sorting through the differences between the imperfect and composed past… only to face the myriad exceptions, the most baffling of which are certainly irregular past participles. Past participles are an integral part of all composed French tenses. Primary schools The Language Teacher Toolkit by Steve Smith and Gianfranco Conti is now available from Amazon. Updated July 2016 Fun with French is a blog with lots of good ideas for the primary French teacher. A blatant self-plug, but Frenchteacher.net has a good range of primary resources on the Y7 page, including parallel reading, games, lesson plans, simple worksheets and simple grammar.

French language learning games All French language learning exercises are completely free to use, do not require registration, and are suitable for both school kids and adult language learners. French language acquisition games that French learners can study with, that teachers can incorporate into lesson plans, or that can be used used in homeschooling environments. An introduction to listening, reading, comprehension and communication in the French language. Each French study topic includes word lists with audio for learning the correct French pronunciation, and practice games for testing your learning progress. Acadian French Acadian French (French: français acadien) is a regionalized dialect of Canadian French. It is spoken by the francophone population of the Canadian province of New Brunswick, by small minorities in areas in the Gaspé region of eastern Quebec, by small groups of francophones in Nova Scotia and Prince Edward Island, in the Magdalen Islands in the Gulf of St. Lawrence, and a small swath of the northernmost portion (St. John Valley) of the U.S state of Maine. Characteristics[edit] Since there was no linguistic contact with France from the late eighteenth century until the twentieth century, Acadian French retained features that died out during the French standardization efforts of the nineteenth century.

Travel - Why the French don’t show excitement When I was 19 years old, after five years of back-and-forth trips that grew longer each time, I finally relocated officially from the United States to France. Already armed with a fairly good grasp of the language, I was convinced that I would soon assimilate into French culture. Of course, I was wrong. There’s nothing like cultural nuance to remind you who you are at your core: my Americanness became all the more perceptible the longer I remained in France, and perhaps no more so than the day a French teacher told me his theory on the key distinction between those from my native and adopted lands. “You Americans,” he said, “live in the faire [to do]. The avoir [to have].

French in Action: Cult Classic French Lessons from Yale (52 Episodes) During the 1980s, Pierre Capretz, a Yale professor, developed French in Action, a French immersion program that featured textbooks, workbooks, and a 52-episode television series. Aired on PBS, the television series gained a devoted following and, years later, a 25th anniversary celebration at Yale asked the question: Is it fair to say that French in Action now has a cult following? You can watch French in Action for free online at the Annenberg Learner website. (Scroll down the page to find the videos.) The program follows the adventures of Robert Taylor, an American student, and Mireille Belleau, a young French woman. And each 30 minute episode provides a context for learning new words and expressions.

Learning French online In our course we emphasize all aspects of language learning from listening comprehension, rapid vocabulary expansion, exposure to French grammar and common idiomatic expressions, to pronunciation practice and interactive grammar exercises. In our program we discuss the Weekly News, French grammar, and French expressions, and much more at a slow pace so that you can understand almost every word and sentence. Our French podcast and French lessons published on our website contain hundreds of learning lessons from beginning to intermediate French, so listen and most importantly read our interactive transcripts on our website and you will be surprised to discover that you know more French than you think! With this tool you do not actually need to have an extensive vocabulary to start listening and reading our material. Your vocabulary will expand rapidly and naturally and your comprehension skills will also improve dramatically.

Joyous Lessons: Learning Languages the Charlotte Mason Way - Volume 1 and Francois Gouin (Part 1) "There is hardly another civilised nation so dull in acquiring foreign tongues as we English of the present time; but, probably, the fault lies rather in the way we set about the study than in any natural incapacity for languages." (Mason, Home Education, p. 301) "Let us state it as impressively as we can: the incapacity of the child is the incapacity of the teacher and the defectiveness of the method. To learn to speak no matter what language is a thing as natural and easy to a child as learning to fly is to a bird. For ourselves, however serious may seem the engagement, we would undertake to make ourselves responsible and to guarantee the development and real progress in a foreign language of any child, however backward, who 'loves a game and knows how to play.'"

Australian politician says use of the word 'Canadian' as derogatory term will... Thursday October 29, 2015 Canadians may be surprised to learn that the term "Canadian" actually has a negative connotation in the country of Australia. Nobody's entirely sure when it began, but at least since the late 70's, when an Australian wants to belittle another, they will call them a "Canadian." 10 Emotions That Can Only Be Explained in French Franz Lang / © Culture Trip Add travel ideas to a Plan and see them on a map Got it! French is a romantic language that seduces the heart like none other, so there’s no surprise it’s enriched with a wealth of words describing emotions that are tricky to articulate. Here are some of the most poignant examples.