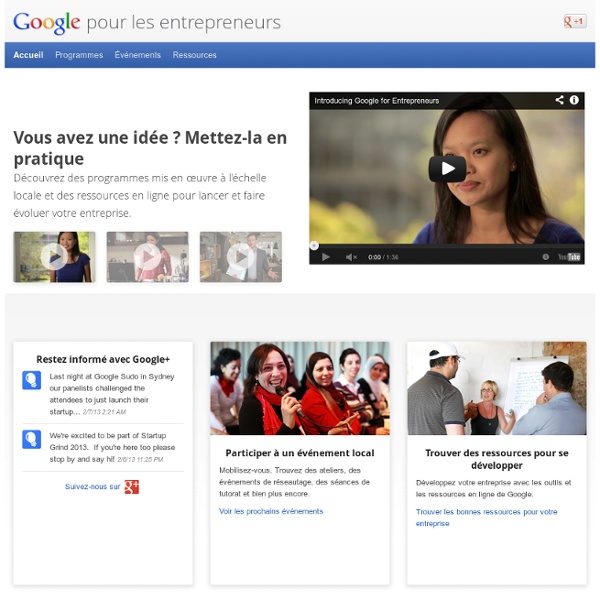 A Brief History of Text Messaging Where would we be without text messaging? The feature has grown from being favored by the tech-savvy to a universal staple. It's allowed us to be more efficient, independent and direct. When you're running late, you text someone to let them know. When you're in class or a meeting and there's an emergency, you know immediately. How to build a startup - by Steve Blank When does the course begin? This class is self paced. You can begin whenever you like and then follow your own pace. It’s a good idea to set goals for yourself to make sure you stick with the course. How long will the course be available?

The Anatomy of a YC Pitch The other night I had an opportunity to attend Demo Day at Y Combinator. It was a fantastic full frontal assault of entrepreneurial energy. 43 pitches, 2 min each back to back for well over 2 hours. It was clear from the outset that these teams were trained to give a certain kind of pitch with their allotted time. For those who didn’t get the chance to attend, I thought a peek into the anatomy of a Demo Day pitch might be helpful or at least entertaining. So here goes: How Google Sold Its Engineers on Management Artwork: Chad Hagen, Graphic Composition No. 1,2009, digital Since the early days of Google, people throughout the company have questioned the value of managers. That skepticism stems from a highly technocratic culture. As one software engineer, Eric Flatt, puts it, “We are a company built by engineers for engineers.”

Coal-Eating Microbes Might Create Vast Amounts of Natural Gas Fracking technology has already made it practical to exploit previously inaccessible natural gas and oil in the United States (see “Natural Gas Changes the Energy Map”). Now several companies are demonstrating a way to use microörganisms that eat coal and excrete methane—the main ingredient in natural gas—as a possible means of extracting fuel from coal resources that had been too expensive to mine. Many coal beds contain large amounts of methane that can be harvested by drilling wells. In recent decades, researchers have demonstrated that a large fraction of the natural gas found in the coal beds is produced by naturally occurring microörganisms that feed on coal, and they have found ways to stimulate the microbes to produce more methane. Luca Technologies, based in Golden, Colorado, is using this approach to increase production from coal beds with existing methane wells.

How to name your startup Choosing a name is one of the parts of a startup I find the most difficult. It’s also something you can easily get hung up on. We all know that the key thing is to move on to actually building something we can put in front of users. Google analyzed our MP3 libraries to visualize the evolution of music Google Play knows a lot about what its users listen to, and on Thursday Google shared some of those insights via a new tool called Music Timeline. It’s an interactive feature that shows the popularity of genres over time, as well as the popularity of subgenres and artists within them. It’s also a great way to show off Google Play as a worthy competitor to more widely used streaming services such as Spotify or Pandora, or more popular MP3 stores such as iTunes. This type of knowledge is a big deal. As I explained earlier this month, the battle to become the world’s dominant streaming service is heating up as more listening goes digital.

Misadventures in VC Funding: The $24 Million Moz Almost Raised Date / / Category / Startups Over the course of this year, I’ve written a couple times about raising a potential round of venture financing for my company, SEOmoz. At last, the saga’s over, I’ve been released from terms of confidentiality and I can share the long, strange story of how I first rejected, was eventually persuaded, but ultimately failed to raise a second round of investment capital. photo credit A Deeper Look At Blackbox’s Data On Startup Failure And Its Top Cause: Premature Scaling [Infographic] Earlier this week, we covered Blackbox, the young company responsible for creating The Startup Genome Report, an ongoing, collaborative R&D project designed to take a comprehensive dive into what makes Silicon Valley startups successful — and not. (Read our initial coverage here.) On Tuesday, we covered the company’s launch of what it calls the Startup Genome Compass, a benchmarking tool for startups that helps founders monitor their progress in different growth categories.

The Secret, Selfish Side Of Social-Curation Sites Here’s my beef with social platforms today: I don’t think they’re very social at all. As much as Google+, Facebook, and Pinterest promise a way to connect, they’ve also promoted a disconnect--sharing on different platforms, proving a fragmented sense of keeping tabs on any social network. We can track our connections’ job promotions on LinkedIn, photos from their new office on Facebook, and hear their celebratory music on Spotify--but what about how these all link together?

On Sale At Last: Twine, Your Gateway To The Internet Of Things A year ago, two MIT Media Lab graduates raised half a million dollars on Kickstarter to create Twine, a cigarette-pack-sized chunk of Internet magic that promised to turn any object in your home into a web-connected, interactive "smart product." Want your basement pipes to send you a text message when they’re in danger of freezing up, or your garage door to ping you if you forget to close it? No problem: With Twine, building your own personal "Internet of things" is supposed to be easier than programming a VCR. And now that the product is available for purchase, it looks like creators John Kestner and David Carr have very nearly delivered on that ambitious promise.