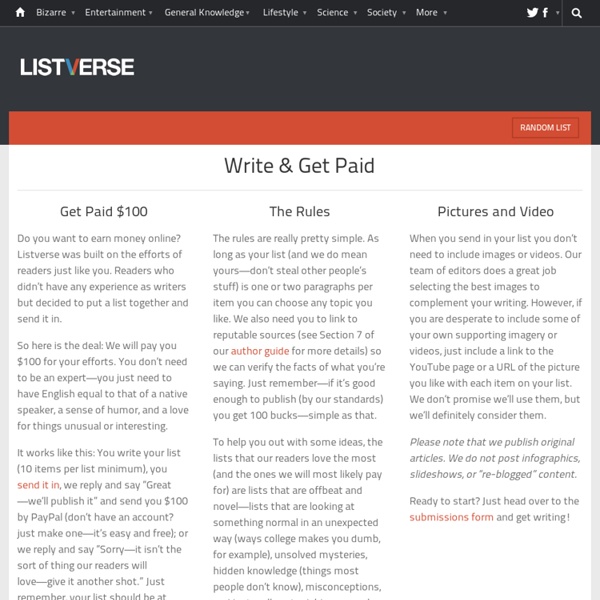 Get Paid $100 Listverse was built on the efforts of readers just like you. Readers who didn’t have any experience as writers but decided to put a list together and send it in. So here is the deal: We will pay you $100 for your efforts. You don’t need to be an expert—you just need to have great English, a sense of humor, and a love for things unusual or interesting. It works like this: You write your list (1,500 words/10 items minimum), you send it in, we reply and say “Great—we’ll publish it” and send you $100 by PayPal (don’t have an account? Either way you win—your list will be read by us and reviewed, and if it’s amazing it will appear on the front page of Listverse to be read by over 15 million people a month! NOTE BENE: We can not accept lists from writers who do not have a PayPal account; this is non-negotiable. The Rules The rules are really pretty simple. Pictures and Video When you send in your list you don’t need to include images or videos. Ready to start?

Related:  hooks247 • pleasures • How to write a book • sandipanchakraborty • Books and poetry

5 Books That Will Transform Your Trading Email I often get asked which books I would recommend for trading. If I had to make a list, I would not have to think hard as to which ones would be at the top of my list. The books listed below are what I consider to be some of the books that really helped me in my trading and it will help you as well.

15 Amazing Animated Short films We all love short animated films, but creating short film is very hard task. Putting whole story in 5 to 10 minutes is not easy. Can you imagine? The Ultimate Guide to Writing Better Than You Normally Do. Writing is a muscle. Smaller than a hamstring and slightly bigger than a bicep, and it needs to be exercised to get stronger. Think of your words as reps, your paragraphs as sets, your pages as daily workouts. Think of your laptop as a machine like the one at the gym where you open and close your inner thighs in front of everyone, exposing both your insecurities and your genitals. Because that is what writing is all about.

Outlaw Magic 101: Live outside the rules. Outlaw magic is electricity, sublimity, grandeur. It’s the fire of god, the breath of life, the orgasm of the universe. It’s the magnetism of non-attachment which is fully engaged at the same time that it’s fully non-grasping. To touch it, you only have to do the hardest thing in the world. To wield it, you only have to surrender. Ono no Komachi Very little is known about this Japanese poetess, and most of it is legendary. She lived around 850 C.E. (b. 834?) during the Heian period. The story about her is that she was a woman of unparallelled beauty in her youth and enjoyed the attention of many suitors. She was, however, haughty and cruel, breaking many hearts. The dark side of the internet Fourteen years ago, a pasty Irish teenager with a flair for inventions arrived at Edinburgh University to study artificial intelligence and computer science. For his thesis project, Ian Clarke created "a Distributed, Decentralised Information Storage and Retrieval System", or, as a less precise person might put it, a revolutionary new way for people to use the internet without detection. By downloading Clarke's software, which he intended to distribute for free, anyone could chat online, or read or set up a website, or share files, with almost complete anonymity. "It seemed so obvious that that was what the net was supposed to be about – freedom to communicate," Clarke says now.

Stephen King's Top 20 Rules for Writers Image by the USO, via Flickr Commons In one of my favorite Stephen King interviews, for The Atlantic, he talks at length about the vital importance of a good opening line. “There are all sorts of theories,” he says, “it’s a tricky thing.”

#56 - Creative thinking hacks All of us possess everything necessary to be more creative. The problem is we’ve been trained away from our creative instincts by schools, parents, movies and workplaces. The word creativity is frequently inflated by association, frequently appearing with overused, hype-laden words such as genius, brilliance, revolution and innovation. Hype mongers and creative intimidators throw those labels around like candy, scaring most people out of their own natural creative instincts. This essay, a high speed hack-centric interpretation of the creative thinking course I taught at the University of Washington, offers both concepts and tricks to help anyone be creative at any time.

Reading Poems Backward It probably happens now and then, though perhaps you don’t give it much thought. You read a poem backward. You pick up a poetry anthology, or you come upon a poem in a magazine, and your eye chances to fall upon its last lines. You read those. Then you read the poem. 29 Semi-Productive Things I Do Online When I’m Trying to Avoid Real Work You don’t always have to work hard to be productive. Productivity can simply be the side effect of doing the right things. So here’s a list of 29 semi-productive things I do online when my mind is set on avoiding ‘real work.’