M.androidcentral. The Amazon Echo has been gaining new features each week, and this week is KidsMD integration for answering questions about your child's medication dosages and more. 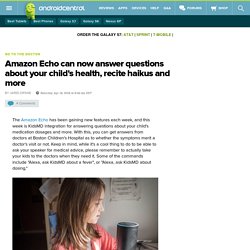 Now you can ask Amazon's Echo about your Fitbit stats. Sure, it's pretty easy just to glance down at your Fitbit device, but the ability to ask about even more complex stats makes this a pretty compelling Alexa skill. 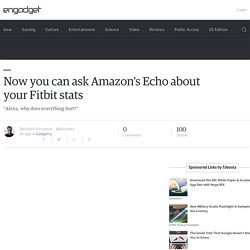 Amazon's virtual assistant will even take the role of a coach with encouraging and inspirational comments, all of which will take the time of the day into account. Asking about your step count in the morning, for example, might get Alexa to say "you've got to start somewhere. " "As we look at how this integration could evolve in the future, there is an endless world of possibilities from fitness coaching and nutrition tips, to guidance before bedtime to help you get a more restful night's sleep," Tim Roberts, executive vice president of interactive at Fitbit, said in a statement.

50 Alexa Voice Commands To Use With Amazon Echo [Video] Advertisements Devices of the home automative nature are generally purchased by home owners and fans of technology in order to make things easier. 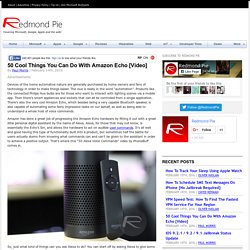 The clue is really in the word “automation”. Products like the connected Philips Hue bulbs are for those who want to interact with lighting scenes via a mobile app. Then there’s smart appliances and sockets that can all be controlled from a single application. There’s also the very cool Amazon Echo, which besides being a very capable Bluetooth speaker, is also capable of automating some fairly impressive tasks on our behalf, as well as being able to understand a whole host of voice commands.

Amazon has done a great job of progressing the Amazon Echo hardware by fitting it out with a great little personal digital assistant by the name of Alexa. Amazon Echo commands. Amazon Echo’s Alexa is now smarter thanks to IFTTT. Alexa might not yet be the household name that Siri already is, but it could very soon be. 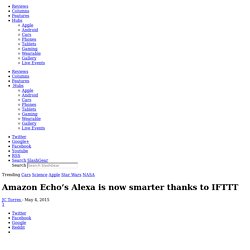 That is, if Amazon really starts pushing its Echo cloud-based home assistant. Alexa, the personification of that product, has just gotten a bit better but, quite ironically, not through Amazon's own heavy lifting. The smart assistant has been endowed with some new smarts thanks to the popular web mashup service IFTTT.

Now you can let Alexa do much more than just controlling you music or your smart appliances. Amazon Echo adds Google Calendar support. Amazon's Echo home assistant has quietly added another talent to its PA abilities, with a new update integrating Google Calendar with the cylindrical speaker. 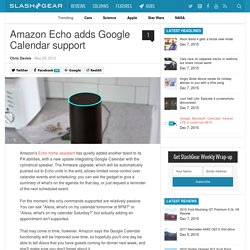 The firmware upgrade, which will be automatically pushed out to Echo units in the wild, allows limited voice control over calendar events and scheduling: you can ask the gadget to give a summary of what's on the agenda for that day, or just request a reminder of the next scheduled event. For the moment, the only commands supported are relatively passive. You can ask "Alexa, what's on my calendar tomorrow at 9PM? " or "Alexa, what's on my calendar Saturday? " but actually adding an appointment isn't supported. That may come in time, however. Adding the calendar is done through the settings section of the Echo app, and right now only Google's service is supported. It's the latest in a number of upgrades to Echo functionality that the retail behemoth has been delivering. Amazon Echo now reads your Audible audiobooks.

Amazon has added audiobook reading to its Echo personal assistant, allowing the pillar-like speaker to regale owners with Audible ebooks. 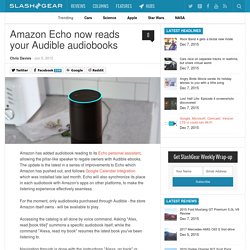 The update is the latest in a series of improvements to Echo which Amazon has pushed out, and follows Google Calendar integration which was installed late last month. Echo will also synchronize its place in each audiobook with Amazon's apps on other platforms, to make the listening experience effectively seamless. For the moment, only audiobooks purchased through Audible - the store Amazon itself owns - will be available to play. Accessing the catalog is all done by voice command. A dozen helpful Amazon Echo how-to tips and tricks. The Amazon Echo has found its way into our home (and it's clearly staying here). 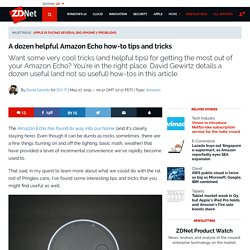 Even though it can be dumb as rocks sometimes, there are a few things (turning on and off the lighting, basic math, weather) that have provided a level of incremental convenience we've rapidly become used to. That said, in my quest to learn more about what we could do with the rat rod of Pringles cans, I've found some interesting tips and tricks that you might find useful as well. 1.

Connect Amazon Alexa to anything. Say a specific phrase This trigger fires every time you say "Alexa trigger" + the phrase that you have defined. 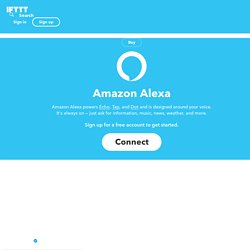 For instance, if you set "party time" as the phrase, you can say "Alexa trigger party time" to have your lights loop colors. Please use lower-case only. Trigger Fields What phrase? Hello, it's Alexa, the Amazon Echo voice with an Adele Easter egg. Hello, Alexa, can you hear me? 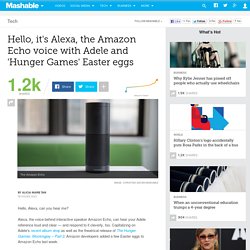 Alexa, the voice behind interactive speaker Amazon Echo, can hear your Adele reference loud and clear — and respond to it cleverly, too. Capitalizing on Adele's recent album drop as well as the theatrical release of The Hunger Games: Mockingjay – Part 2, Amazon developers added a few Easter eggs to Amazon Echo last week. The device can already do a variety of things, including answer your questions, play music, control your smart home lights and provide updates on news, sports, weather and traffic. Now with the right phrases, Alexa revels in the Adele and Hunger Games craze just like us humans. List of known easter eggs for Amazon Echo (so far) : amazonecho. Our favorite IFTTT recipes for the Amazon Echo. Don't think of it as talking to yourself, think of it as talking to your house. 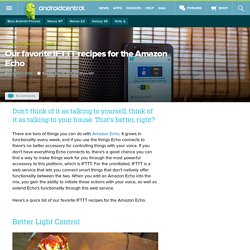