What is Culture? Definition of Culture 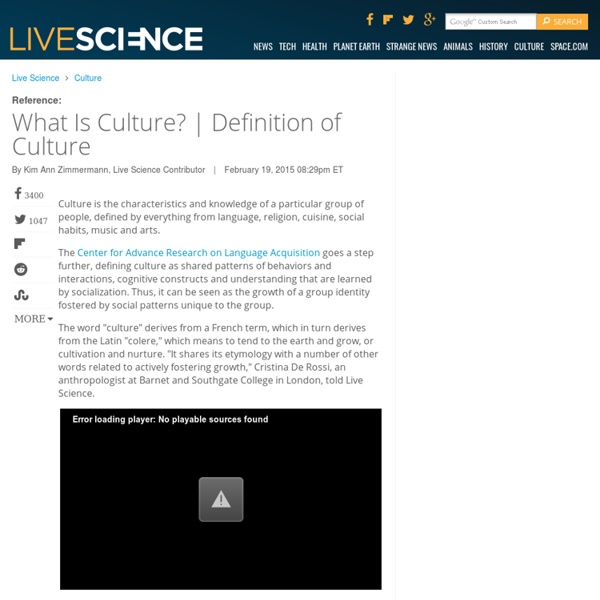 Culture is the characteristics and knowledge of a particular group of people, defined by everything from language, religion, cuisine, social habits, music and arts. The Center for Advance Research on Language Acquisition goes a step further, defining culture as shared patterns of behaviors and interactions, cognitive constructs and understanding that are learned by socialization. Thus, it can be seen as the growth of a group identity fostered by social patterns unique to the group. The word "culture" derives from a French term, which in turn derives from the Latin "colere," which means to tend to the earth and grow, or cultivation and nurture. Error loading player: No playable sources found Many countries are largely populated by immigrants, and the culture is influenced by the many groups of people that now make up the country. Other drivers of Western culture include Latin, Celtic, Germanic and Hellenic ethnic and linguistic groups. The continent of Africa is essential to all cultures. Related:  FINAL MAJOR PROJECT BUSINESS PLAN RESEARCH

Office of Study Abroad | Michigan State University Culture... influences our expectations of what is appropriate or inappropriate is learned reflects the values of a society frames our experiences provides us with patterns of behavior, thinking, feeling, and interacting In summary, culture affects every aspect of daily life - how we think and feel, how we learn and teach, or what we consider to be beautiful or ugly. However, most people are unaware of their own culture until they experience another! In fact, we don't usually think about our culture until somebody violates a culturally-based expectation or we find ourselves in a situation where we have the feeling that WE violated somebody else's cultural expectations, but are uncertain how. So much of what causes conflict or confusion is the part of the culture that we can't see or touch. Cultural misunderstandings and conflicts arise mostly out of culturally-shaped perceptions and interpretations of each other's cultural norms, values, and beliefs (those elements below the waterline).

5 things to know about black culture now There's a scene in my satirical film "Dear White People" in which social misfit Lionel Higgins is asked to write a black culture piece by the editor of a campus newspaper staffed with mostly white people. Lionel accepts the assignment with some trepidation. Despite the benefit of being black, large Afro and all, he feels underqualified, because he has yet to find a pocket of culture he identifies with at the fictional Winchester University. Lionel's dilemma is one many black Americans share: a deep desire to have an identity rooted in black culture coupled with the knowledge that what's seen as "authentically black" in popular culture doesn't reflect our actual experience. We're left in a sort of no-man's land, because we don't often see ourselves reflected in mainstream culture, nor in popular "Black Culture." In making the film and engaging in debates about the state of "black film," here are five things I've come to know about black culture now: 1. 2. 3. 4. But this is not new. 5.

Les différentes cultures dans le monde People, culture and lifestyle - About Australia Australia is a product of a unique blend of established traditions and new influences. The country’s original inhabitants, the Aboriginal and Torres Strait Islander peoples, are the custodians of one of the world’s oldest continuing cultural traditions. They have been living in Australia for at least 40 000 years and possibly up to 60 000 years. The rest of Australia’s people are migrants or descendants of migrants who have arrived in Australia from about 200 countries since Great Britain established the first European settlement at Sydney Cove in 1788. In 1945, Australia’s population was around 7 million people and was mainly Anglo–Celtic. Since then, more than 6.5 million migrants, including 675 000 refugees, have settled in Australia, significantly broadening its social and cultural profile. Today Australia has a population of nearly 23 million people. Shared values At the same time, everyone is expected to uphold the principles and shared values that support Australia’s way of life.

Image Others Have of US Social media spend failing to live up to expectations - Marketing Week Social media is failing to meet projections as marketers consistently overestimate how much budget they will dedicate to sites such as Facebook, Twitter and Snapchat. According to a survey of 388 top US marketing execs that is run biannually by The CMO Survey, marketers are now spending 10.5% of their budgets on social media. And they expect that to rise. Over the next 12 months, that figure is expected to increase to 12.9% while over the next five years marketers estimate that 18.5% of their budgets will go to social media. Yet the survey shows that marketers are consistently failing to meet their own projections for social media spend. Part of the issue could be that marketers are making “minimal progress” in integrating their social media with their wider marketing strategy, according to the report. The impact of social media also remains difficult to prove. Mobile marketing is similarly struggling to prove its worth.