50 Sophisticated Words You Should Start Using Instead 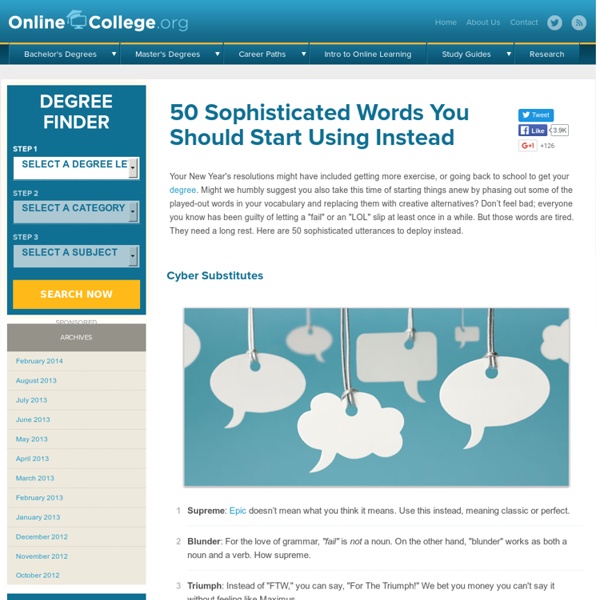 Your New Year's resolutions might have included getting more exercise, or going back to school to get your degree. Might we humbly suggest you also take this time of starting things anew by phasing out some of the played-out words in your vocabulary and replacing them with creative alternatives? Don’t feel bad; everyone you know has been guilty of letting a "fail" or an "LOL" slip at least once in a while. But those words are tired. They need a long rest. Here are 50 sophisticated utterances to deploy instead. Cyber Substitutes Supreme: Epic doesn’t mean what you think it means. Better Buzzwords Donjon: Men, have you been relegated to a small segment of the house referred to as your "man cave?" Underage Upgrades Alas: "Oh, snap" is so out. Professional Pick-me-ups Demiurgic: "Innovative" is the second-most overused resume filler word. Romantic Retools Cherish: Take a lesson from The Association and discover another way to say "I love you." Dignified Descriptors

Mission Statements of Digital Agencies and Startups Ahhhh, the good old Mission Statement. Remember in Part 2 of “The 7 Habits of Highly Effective Entrepreneurs” series where we talked about the fact that ‘Highly Effective’ Digital Entrepreneurs all have one? As mentioned in Habit 2, “A mission statement gives a business a framework and helps give it definition and an identity.” Well, when I was doing the research for that post, I couldn’t find any great lists of example Mission Statements specifically from Digital Businesses. How could something so important have so few good resources I hear you ask? Well you’re right – and this post should help!

Why I am an Atheist In 1903, Kentucky-based newspaper "Blue-grass Blade" asked its readers to write in and contribute to a forthcoming feature named, "Why I am An Atheist." Hundreds of letters soon arrived and many were subsequently reprinted in the paper; over a century later, in 2011, they were compiled to form the book, Letters from an Atheist Nation. Below is just one of the letters. It was written by Minnie Parrish, a 23-year-old divorced mother of four who later went on to become the first female doctor to practice in North Texas.

The Chip Bag Fold Learn this chip bag fold and you will never need a clamp ever again! Have you ever had a bag of unfinished potato chips which you want to keep fresh? These simple steps will allow you to close the potato chip bag without using a clip or clamp. Guide for Writers: Latin Phrases It’s a matter of taste and style, but not long ago American writers attempted to demonstrate their credentials to the world by including Latin and French phrases within works. A dash of Latin was expected of the moderately educated throughout the Western world. annus mirabilis - wonderful year arbiter elegantiae - judge of the elegant; one who knows the good things in life 9 Tips for Becoming a Social Media Influencer Social Media Examiner Do you want people to come to you for social media advice? Are you trying to become a social media influencer? Publishing on social media is a great way to share expert knowledge and develop your influencer status. In this article I’ll share nine tips that can help you become a social media influencer. Discover nine tips for becoming a social media influencer. Listen to this article:

10 Books You ABSOLUTELY MUST READ If You Are Tired Of Being Broke (No Self-Help Rah-Rah Bullshit) 1. Buffettology: The Proven Techniques for Investing Successfully in Changing Markets That Have Made Warren Buffett the World's Most Famous Investor I NEVER buy books on stock market. The 5 unusual habits of Ernest Hemingway Hey, we’re all creative, right? But what differentiates my papier-mâché Halloween masks or your colourfully crocheted undergarments from the Nobel Prize-winning artworks of somebody like, say, Ernest Hemingway? Well, maybe Ernest was just a little stranger than you or me. New studies show that both creativity and eccentricity may be the result of genetic variations that increase the brain’s ability to filter out useless distractions and just get on with it. Well, Papa certainly got on with it – but just how peculiar was he?

LiveAndTell, A Crowdsourced Quest To Save Native American Languages While you won't have any trouble finding a way to learn Spanish, French, or German in the United States, brushing up on your Lakota or Navajo isn't so easy. The Endangered Language Fund projects that half of the languages spoken on earth will disappear in the next century, and Native American tongues are among them. The Administration for Native Americans reports that when the U.S. was founded, more than 300 Native American languages were spoken. That number has since dropped to 175, and only 20 are taught to children.

I am going to actively try to utilize these words now.. by joshthecloud Jul 16