PeerJ leads a high-quality, low-cost new breed of open-access publisher. We all know by now that traditional academic publishing is in an appalling mess. 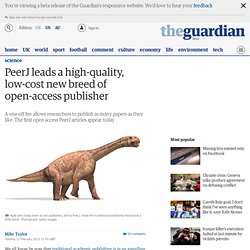 Locking publicly funded research behind a paywall is completely unacceptable, and happily our government understands this. The Finch Report has rightly mandated that research must be published as open access. So profiteering publishers, seeing the writing on the wall, are offering authors open-access options. But corporations addicted to profit margins of 32-42% find it hard to give them up. As a result, while the world's leading open-access journal, PLOS ONE, is able to be financially self-sustaining by charging an article processing fee (APC) of $1,350 (£865) (and offering no-questions-asked waivers to authors without APC funding), the legacy publishers charge significantly more for inferior products. It is maybe not surprising that the Finch Report's financial estimates assumed average APCs of £1,500-£2,000, and that some academics are baulking at such prices. Sounds crazy, right? Open access will cause problems for learned societies' journals, accepts Finch.

The UK’s move towards open-access publishing will inevitably place some learned societies’ journals into financial jeopardy, according to the chair of the committee that recommended making the transition. 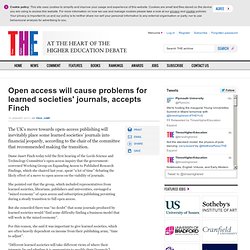 Dame Janet Finch today told the first hearing of the Lords Science and Technology Committee’s open-access inquiry that the government-convened Working Group on Expanding Access to Published Research Findings, which she chaired last year, spent “a lot of time” debating the likely effect of a move to open access on the viability of journals. She pointed out that the group, which included representatives from learned societies, librarians, publishers and universities, envisaged a “mixed economy” of open access and subscription publishing persisting during a steady transition to full open access. But she conceded there was “no doubt” that some journals produced by learned societies would “find some difficulty finding a business model that will work in the mixed economy”. Finch access plan unlikely to fly across the Atlantic. Report draws US notice but experts say journals will not ‘play RCUK game’. 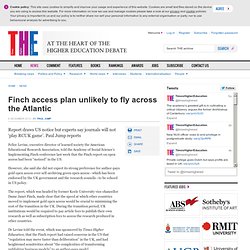 Paul Jump reports. Report reveals impact of open access on libraries. 4 September 2012 Academic libraries need to evolve to continue to meet the needs of their users in an open-access world, reports Sian Harris Open access (OA) has been making the headlines recently – and not just in industry-specific publications. 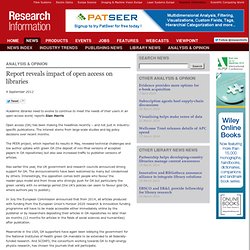 The interest stems from large-scale studies and big policy decisions over recent months. The PEER project, which reported its results in May, revealed technical challenges and low author uptake with green OA (the deposit of non-final versions of accepted papers in OA repositories) but also saw increased traffic to publisher versions of articles.

Also earlier this year, the UK government and research councils announced strong support for OA. Open access will change the world, if scientists want it to. While the Australian Research Council considers its policy on open-access publication and others within the scientific community call for the increased sharing of scientific data, the British are already a step ahead. 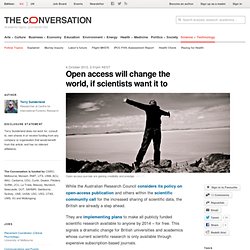 They are implementing plans to make all publicly funded scientific research available to anyone by 2014 – for free. This signals a dramatic change for British universities and academics whose current scientific research is only available through expensive subscription-based journals. Information & Guidance » Exploring open access to save monographs, the question is – how? You've just spent years researching and then writing your monograph. 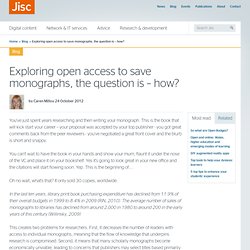 This is the book that will kick start your career – your proposal was accepted by your top publisher - you got great comments back from the peer reviewers - you've negotiated a great front cover and the blurb is short and snappy. You can't wait to have the book in your hands and show your mum, flaunt it under the nose of the VC and place it on your bookshelf. Yes it's going to look great in your new office and the citations will start flowing soon.

Yep. Licensing Data as Open Data. One of the findings that has emerged clearly from the UK OER Programme and from the UK Discovery work is that for a healthy content ecosystem, information about the content needs to be available to many different systems, services and users. 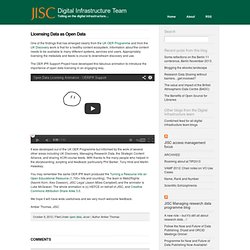 Appropriately licensing the metadata and feeds is crucial to downstream discovery and use. The OER IPR Support Project have developed this fabulous animation to introduce the importance of open data licensing in an engaging way. It was developed out of the UK OER Programme but informed by the work of several other areas including UK Discovery, Managing Research Data, the Strategic Content Alliance, and sharing XCRI course feeds. With thanks to the many people who helped in the storyboarding, scripting and feedback: particularly Phil Barker, Tony Hirst and Martin Hawskey. You may remember the same OER IPR team produced the Turning a Resource into an Open Educational Resource (1,700+ hits and counting). ORCID Launches Registry. Open access. CORE. The inexorable rise of open access scientific publishing. Inventor of the world wide web Sir Tim Berners-Lee after his turn at the Olympics opening ceremony. 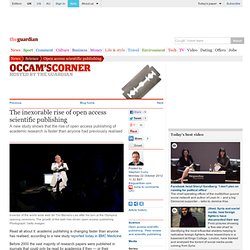 The growth of the web has driven open access publishing. Photograph: Getty Images Read all about it: academic publishing is changing faster than anyone has realised, according to a new study reported today in BMC Medicine. Before 2000 the vast majority of research papers were published in journals that could only be read by academics if they — or their university libraries — paid a subscription. Gold is good, but it's not the only colour, RCUK says. Research councils try to convince that their open-access policy is not monotone. 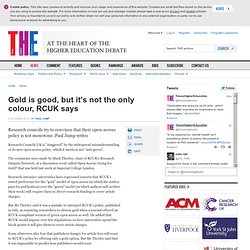 Paul Jump writes Research Councils UK is "staggered" by the widespread misunderstanding of its new open-access policy, which it insists is not "anti-green". The comments were made by Mark Thorley, chair of RCUK's Research Outputs Network, at a discussion event called Open Access: Going for Gold? That was held last week at Imperial College London. Open Access in the UK: Reinventing the Big Deal. A Q&A with co-architect of the Big Deal Jan Velterop follows this introduction The scholarly communication system has been in serious difficulties for several decades now, a problem generally referred to as the “serials crisis”. 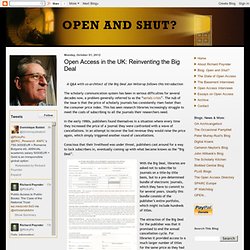 The nub of the issue is that the price of scholarly journals has consistently risen faster than the consumer price index. This has seen research libraries increasingly struggle to meet the costs of subscribing to all the journals their researchers need. In the early 1990s, publishers found themselves in a situation where every time they increased the price of a journal they were confronted with a wave of cancellations. In an attempt to recover the lost revenue they would raise the price again, which simply triggered another round of cancellations. Conscious that their livelihood was under threat, publishers cast around for a way to lock subscribers in, eventually coming up with what became known as the “Big Deal”.

Push for Open Access to Publicly Financed Research Swells Abroad - Technology. By Jennifer Howard Researchers, publishers, and librarians have spent a lot of this year firing up the longstanding debate over access to published research. You've probably heard the big questions: Who gets to see the results of work the public helps pay for, when should they get to see it, and who's going pay for it? This summer, the fervor has gone global, with policy makers in Britain, elsewhere in Europe, and in Australia signaling that they're ready to come up with some answers. Details vary from country to country and proposal to proposal, but the overall warming trend looks very clear. 5 reasons why I can’t find Open Access publications « MmITS Blog. By Louise Morrison (@ljmorr) With the publication of the Finch Report, Open Access and Institutional Repositories are hot topics at the moment.

So it seems like an opportune moment to bring up an issue that’s been bothering me for a while. Research Intelligence - 'Predators' who lurk in plain cite. Paul Jump on dubious open-access journals keen to attract unwary academics - and their cash Credit: Kobal Wolves in the fold ‘predatory’ journals are sinking their teeth into the opportunities presented by open-access publishing models When Alastair Harden began receiving emailed invitations earlier this year to submit papers to various similar-sounding open-access journals with what he saw as little obvious relation to his discipline, the PhD student and sessional lecturer in Classics at the University of Reading smelled a rat. Closer examination revealed that the journals were all published by the Centre for Promoting Ideas, which, despite its British spelling, claims on its website to be based at what appears to be a non-existent address in New York City.

A visit to what Mr Harden described as the centre's "hilarious" website - which includes reference to a director named "Dr John Simth Jr" (sic) - convinced him to contact Times Higher Education. You may already be an editor! Is the Academic Publishing Industry on the Verge of Disruption? In the quiet, restrained world of research libraries, any controversies that arise are, for the most part, cordial and largely academic. So some within the industry may have been understandably surprised by the widespread attention paid when, in April, Harvard's Faculty Advisory Council sent a letter to the faculty concerning what it alleged was a crisis with its scholarly journal subscriptions.

The letter reported an "untenable situation facing the Harvard Library" in which "many large journal publishers have made the scholarly communication environment fiscally unsustainable and academically restrictive. " The letter revealed that Harvard is paying $3.75 million annually in journal subscriptions and that they make up "10% of all collection costs for everything the Library acquires. " A few of the journals, it says, cost upward of $40,000 a year--each. [READ: A Harvard Education Isn't As Advertised.] The scholarly scientific journal industry is, arguably, at least a few centuries old. Open resource to support PhD scholars with research data management : JISC.

Databib. Journal of Librarianship and Scholarly Communication. CC HowTo #1: How to Attribute a Creative Commons licensed work. All Creative Commons licenses require future users to attribute the works they use: You must attribute the work in the manner specified by the author or licensor (but not in any way that suggests that they endorse you or your use of the work) The Creative Commons FAQ has this to say about attributing CC-licensed works: These instructions are clear in theory, but many people who apply CC licenses to their work do not specify how they would like to be attributed. On sites like Flickr or ccMixter, you might not be able to determine the creator’s real name, and sometimes the work doesn’t have a title. If part of the goal of Creative Commons is to reduce transaction costs, then there must be some way to use those works without having to contact the creator to ask about proper attribution.

In practice, here’s how you can handle the attribution requirements listed above: Here are a few examples: 50 Open Access Resources for Librarians – Part 2. 50 Open Access Resources for Librarians – Part 1. JISC and UK Research Councils to build a robust repository infrastructure for the future. Researchers can disrupt publishing - Research Information.