CLIL - Content and Language Integrated Learning- What is CLIL? 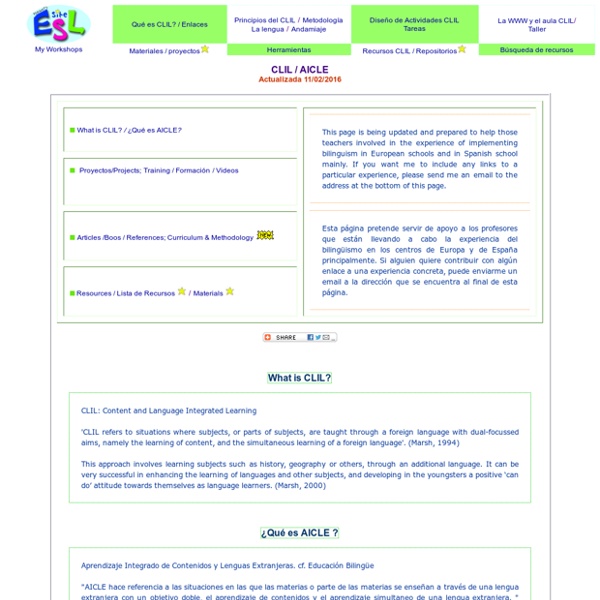 CLIL4teachers / CLIL4teachers Front Page PLEASE NOTE: You can download resources from the wiki without requesting access. Please request access (see link on the right) if you would like to leave comments or upload your own materials. To be given access, you need to include a short message to explain your interest in CLIL. Thank you. SchoolsWorld Why do children lie? We look at some of the different types of lies children tell, and the possible reasons behind them... Find out how a can-do attitude, a little self-belief, and a willingness to get things wrong sometimes can set a good... Do misbehaving children need punishment or positive discipline – and what’s the difference anyway? Content and Language Integrated Learning In ELT, forms of CLIL have previously been known as 'Content-based instruction', 'English across the curriculum' and 'Bilingual education'. Why is CLIL important? How does CLIL work?

Cahier de textes de SVT Euro classes de 1ère 2012-2013 - VOICI LA NOUVELLE ADRESSE DU SITE Cahier de textes de SVT Euro classes de 1ère 2012-2013 Mercredi 12 septembre 2012 Présentation Search for WebQuests Latest news: June 17, 2015: This year marks the 20th anniversary of the WebQuest model. Watch this space for announcements of some new resources coming later this summer! How Lego Became The Apple Of Toys Every September, largely unbeknownst to the rest of the company, a group of around 50 Lego employees descends upon Spain’s Mediterranean coast, armed with sunblock, huge bins of Lego bricks, and a decade’s worth of research into the ways children play. The group, which is called the Future Lab, is the Danish toy giant’s secretive and highly ambitious R&D team, charged with inventing entirely new, technologically enhanced "play experiences" for kids all over the world. Or, as Lego Group CEO Jørgen Vig Knudstorp puts it, "It’s about discovering what’s obviously Lego, but has never been seen before."

Help Center Our Rewordifying Engine is the brain behind Rewordify.com, and no other web site has it. May we brag for a moment? Look at the table to the right. Do you see how Rewordify.com changed how words are simplified depending on how they're used? Our Rewordifying Engine is not a simple synonym replacer—it's a sophisticated natural language processing system. It understands how words and phrases are used.