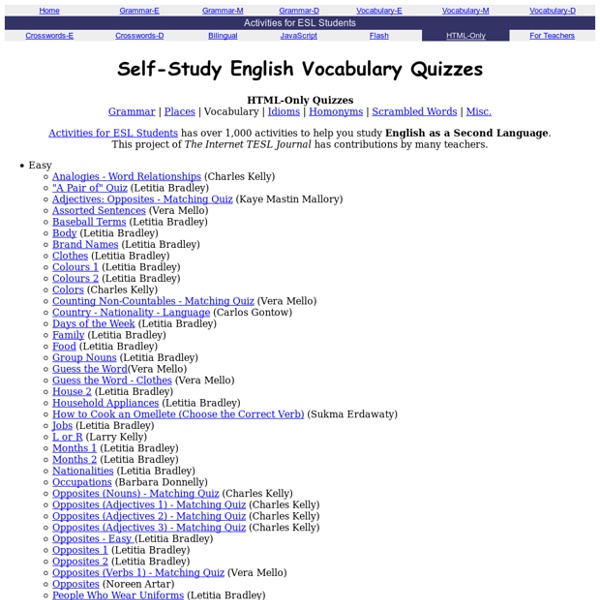 Verb-Adverb Charades Subjects Arts & Humanities --Language Arts --Theater Arts Grade [facebookbadge] Commonly Confused Words for ESL Students and Classes Here are some of the most commonly confused English word pairs. They have been chosen especially for ESL learners. beside / besides beside: preposition meaning 'next to', 'at the side of' I sit beside John in class.Could you get me that book? It's beside the lamp. How to learn English A guide to learning English* really well © Antimoon In today’s world, hundreds of millions of people want to learn English.

Nine Things You Probably Didn’t Know About Swear Words Four-letter words have been around since the days of our forebears—and their forebears, too. In Holy Sh*t: A Brief History of Swearing, a book out this month from Oxford University Press, medieval literature expert Melissa Mohr traces humans’ use of naughty language back to Roman times. NewsFeed asked Mohr what surprising tidbits readers might stumble upon amidst the expletives. Here are nine talking points from her opus for your next (presumably, pretty edgy) cocktail hour. (FROM THE MAGAZINE: Help! My Baby Swears) Vegetables A-Z - Vegetables Vegetables A-Z Artichokes - globe Flowers, Bulbs Artichokes - Jerusalem Preventive Punishment for Robots – Earthly Mission We enountered this robot writing down ‘I must not hurt humans’ countless of times on a recent patrol over Athens, and we thoroughly enjoyed the sight. I shot these photos but forgot to make a video which would show it in action. I then searched the Internet and the home page of the festival where we saw it for further information. It turned out that the installation is by Portuguese media artist Filipe Vilas-Boas and is entitled The Punishment, as the robot on display executes a preventive punishment for its possible future disobedience.

Making the right choices: ‘Lean On Me’ – On the same page Every word in the song “Lean On Me” by Bill Withers has been written into a grid with some distractors. Starting in the upper left corner, students complete the lyrics choosing one of the words available right next to the last word in any direction and using each square only once. To guide them through the process, the writing worksheet provides students with a few words in each line, including the first ones, which are also capitalised in the grid for easier reference. You may want to model and play the first two lines of the song so that the students can understand the procedure. Students will be practising a number of skills as they make their choices. Sometimes they will have to make decisions concerning subject-verb agreement, sentence structure, word order, or selecting the right preposition.

Computer-generated models' social media influence on the rise Many things you see online are not what they appear to be. In the case of social media influencers – people who are paid to promote brands and products – some aren't even real people. In what is part of a growing online trend, some of these computer-generated influencers have more than one million followers each. Recent studies predict the influence marketing space will be a $2 billion industry by 2020. The goal of these computer-generated influencers is to get you to buy products or experiences, but critics worry you could be deceived by a false image.

Typing Test English See the partners we work with below. Expand each one to see how they process your data. You can object to legitimate interest processing per vendor. Third Party VendorsAccept all | Reject all Privacy policy: Purposes (Consent): Virtual Fashion Model - Future of Fashion Model Getty Images - Alexander McQueen was on to something: eight years after he projected a floating hologram of Kate Moss at the end of his Fall 2006 show, a new study published in the International Journal of Fashion Design predicts that holographic versions of top models will soon replace their human counterparts. Science Daily - Ralph Lauren is finally giving ladies the Polo treatment—the brand will launch a version of the famous men's sportswear line this fall.

Giving Students a Well-Deserved Break- 13 Addictive Word Games Ever thought learning vocabulary or grammar was dull? I’m pretty sure this thought never ever crossed your mind, but just in case you know someone who might need a break from the traditional grammar and vocabulary exercises, let me share with you a nice alternative. Whether you have two minutes or two hours, spend your break testing your knowledge with these amazing vocabulary and grammar games, some of them from well-known dictionaries. Have fun and learn some new words along the way. You don’t have to register for any of them, although some of these sites offer this possibility for those students who want to track their progress. My favourite?

Why US public schools' creepy use of surveillance AI should frighten you Public schools across the US continue to spend millions implementing AI-powered surveillance solutions alleged to prevent or mitigate violence. The only problem: most of them don’t work. US schools now rival China’s when it comes to ubiquitous surveillance, yet our students remain at the highest risk for violence among developed nations. What gives? The ideas seem sound. Confused and Misused Words, Vocabulary English in the present world is not a foreign language. It has become the International Language in an IT-driven society. One’s success in life has become very much dependent on the level of proficiency in English Language. Nevertheless, English language harbours a number of words that are highly susceptible to be confused or misused. This page on Confused and Misused Words gives you a compilation of the most frequently misspelled, commonly confused and easily misunderstood words floating around in the English Language.