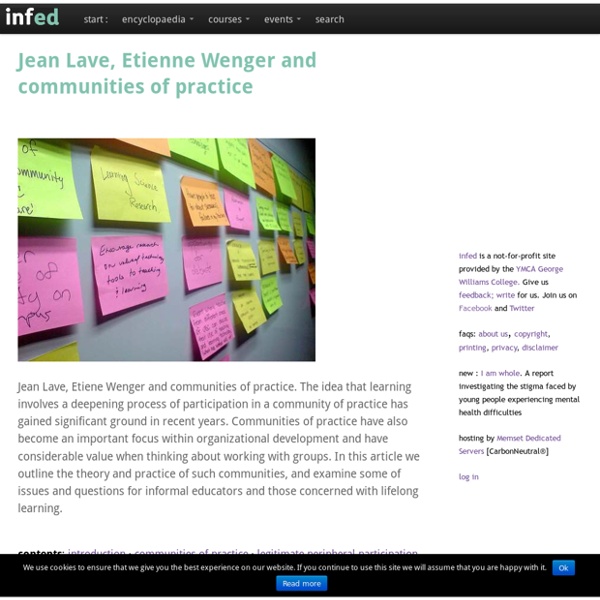 contents: introduction · communities of practice · legitimate peripheral participation and situated learning · learning organizations and learning communities · conclusion · references · links · how to cite this article Many of the ways we have of talking about learning and education are based on the assumption that learning is something that individuals do. Furthermore, we often assume that learning ‘has a beginning and an end; that it is best separated from the rest of our activities; and that it is the result of teaching’ (Wenger 1998: 3). But how would things look if we took a different track? Supposing learning is social and comes largely from of our experience of participating in daily life? It was this thought that formed the basis of a significant rethinking of learning theory in the late 1980s and early 1990s by two researchers from very different disciplines – Jean Lave and Etienne Wenger. Communities of practice The characteristics of such communities of practice vary.

A bottom-up approach to CPD is ‘best’ Imparting knowledge of teaching is not always best done from the “top,” explains Andrea McMahon. After attending his first Learning Lunch in the newly-established Centre for Excellence in Teaching (CET) at Newham College, maths lecturer Anwar Faruqh summarised his experience, saying: “What an excellent idea – it’s like having our own Institute for Learning on our doorstep”. His enthusiasm is exactly the sentiment that those involved in centre hope will gather momentum and inspire other teachers in the college to take ownership of their professional development. Engaging in activity whose primary purpose is to develop professional practice is the bedrock of expert teaching and training. The recently updated Teaching Standards capture this clearly as demonstrated through the three domains: professional values and attributes, professional knowledge and understanding, and professional skills. Professional development is most effective when a bottom-up approach is favoured over a top-down one.

The dynamics of managing/nurturing networks of practice Image by D'Arcy Norman via Flickr I received a beautiful article (thanks to Julie Ferguson!). Just got a tip through the comments that it's also online. This is the full reference to the article: Agterberg, M., Van den Hooff, B., Huysman, M., & Soekijad, M. (2010).

Universities must prepare students for new labour market: McGill president Universities will have to prepare students for multiple career changes and a longer working life if they are to contribute to reducing the global inequality that is a major focus of this week’s discussion at the World Economic Forum in Davos, says the principal of McGill University. Suzanne Fortier is the only Canadian university president who is attending the international forum of the world’s financial and government elites, this year tackling challenges from security to the impact of technology on jobs. On Monday, the annual gathering published its prediction that the world will lose 5.1 million jobs within the next five years as a result of automation and smarter technology, with health care, energy and finance likely to suffer the steepest losses. “It brings us back to the central mission of the university, how to think, how to make leaps in knowledge, how to have imagination and rigour at the same.

DIY Teaching CPD How we teach is a complex mix of our values, context and emotions. It is deeply influenced by our knowledge, understanding and beliefs about pedagogy, our subject and what is of value to learn. No two teachers are likely to be the same. Front Cover of the New Improving Teaching Resource: What’s Your Next Step I’m deeply passionate about the education of both young people and teachers. I now spend a lot of my time educating the latter after fifteen years in the classroom.

Mindfulness: the craze sweeping through schools is now at a university near you Slowly take a raisin and examine every wrinkle and fold of its surface. Feel its texture with your fingers. Inhale its scent. Squeeze it and hear how it sounds. Raise it to your lips, place it in your mouth, explore it with your tongue. Prepare to chew. Becoming A Better Teacher: Teachers Doing It For Themselves “Every teacher needs to improve, not because they are not good enough, but because they can be even better.” Dylan Wiliam Every teacher wants to get better. I use Dylan Wiliam’s quotation over and over unashamedly because I think it strikes a truth that all teachers and school leaders must embrace.

Knowledge Networks: Introduction Editors, Paul Hildreth and Chris Kimble Publisher, Idea Group Publishing Hard cover ISBN: 159140200X Soft cover ISBN: 1591402700 The current environment for organizations is one that is characterised by uncertainty and continuous change. This rapid and dynamic pace of change is forcing organizations that were accustomed to structure and routine to become ones that must improvise solutions quickly and correctly. To respond to this changed environment organizations are moving away from the structures of the past that are based on hierarchies, discrete groups and teams and moving towards those based on more fluid and emergent organizational forms such as networks and communities.

21st Century Skills Definition The term 21st century skills refers to a broad set of knowledge, skills, work habits, and character traits that are believed—by educators, school reformers, college professors, employers, and others—to be critically important to success in today’s world, particularly in collegiate programs and contemporary careers and workplaces. Generally speaking, 21st century skills can be applied in all academic subject areas, and in all educational, career, and civic settings throughout a student’s life. It should be noted that the “21st century skills” concept encompasses a wide-ranging and amorphous body of knowledge and skills that is not easy to define and that has not been officially codified or categorized. While the term is widely used in education, it is not always defined consistently, which can lead to confusion and divergent interpretations.

Teachers taking responsibility for their own CPD November has been an interesting month for me. As a company we have attended, hosted and sponsored over 25 events. These events ranged from schools voluntarily hosting events about IRIS Connect to share best practice, to large national events.

CoP: Best Practices by Etienne Wenger [Published in the "Systems Thinker," June 1998] You are a claims processor working for a large insurance company. You are good at what you do, but although you know where your paycheck comes from, the corporation mainly remains an abstraction for you. The group you actually work for is a relatively small community of people who share your working conditions. It is with this group that you learn the intricacies of your job, explore the meaning of your work, construct an image of the company, and develop a sense of yourself as a worker.

Making CPD meaningful Dave Scott – 6x World Ironman champion. Dave Scott is a 6 times winning world Ironman triathlete who left nothing to chance. During peak training you could catch him cycling 75 miles, swimming a few 1000 metres and running up to 20 miles on a daily basis for weeks on end. In order to win six world championships he continued to reflect on his training and make tweaks to it in order to achieve optimal performance (much like the British cycling team under Sir David Brailsford – searching for a series of small marginal gains which would combine to produce a larger impact on performance). Dave Scott took it a step further and use to rinse his cottage cheese (not a euphemism) with water in order to reduce the amount of fat it contained upon consumption. He believed that this was one in series of other small steps which enabled him to reach peak performance.

CoP: Best Practices by Etienne Wenger [Published in the "Systems Thinker," June 1998] You are a claims processor working for a large insurance company. You are good at what you do, but although you know where your paycheck comes from, the corporation mainly remains an abstraction for you.

Smith, M. K. (2003, 2009). Communities of practice. In The encyclopedia of informal education. Retrieved from www.infed.org/biblio/communities_of_practice.htm by christamccartney Oct 15

This is the article that started my journey towards understanding the power of social learning and connecting with Etienne and Bev Wenger-Trayner. by nmovall Aug 1