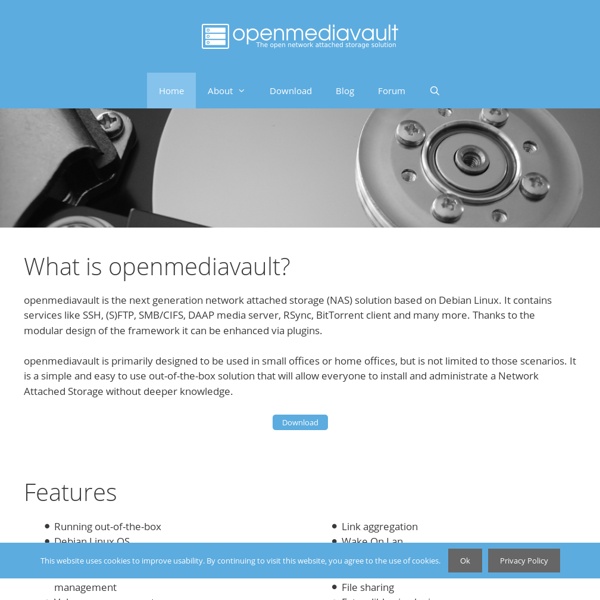 NAS4Free Amahi Home Server - Making Home Networking Simple Five Best NAS Enclosures Yeah, and then hook up the 100$ computer case, and watch it as it... does absolutely nothing. Then realize it has no motherboard, no CPU, no RAM, no NIC... "wait, cancel that donation!" $100 on case + MB + CPU + RAM + OS SSD (64GB) $600 on 4x3tb HD $100 on tray-less HDD rack. Best NAS you could ever want right there. The Synology boxes are a lot more than "essentially a glorified computer case". If FreeNAS had supported raid6 at the time I built it my box I might have been happier, but I don't expect it would have made an enormous difference. The Synology isn't perfect, but it's way, way better than the Ubuntu box. I'll never build another NAS again.

ZFS Raidz Performance, Capacity and Integrity Comparison July 15, 2014 comparing speed, space and safety per raidz type The ZFS file system on FreeBSD and Ubuntu Linux is incredible. ZFS has data integrity verification, protection against data corruption, support for high storage capacities, great performance, replication, snapshots and copy-on-write clones, and self healing which make it a natural choice for data storage. The most asked question we hear when talking about raids is, "Which raid is the best?" Eventually you will lose a drive and depending on the raid solution will decide if data is lost. Raids have three main benefits: Performance, Capacity and Integrity. The ASCII triangle below shows all three properties. # Raids have three main advantages over using a single disk. What are the advantages and disadvantages of each raid type ? raid0 or striping array has no redundancy, but provides the best performance and additional storage. Be Safe, Not Sorry. Specification of the testing raid chassis and environment Bonnie++ benchmarks

Open Media Vault – Installation « Kentish This guide was created for my friend who was new to setting up a server and configuring Open Media Vault, Sickbeard and SABNzb etc. Basically he had been round to my house and said how did you do all those cool things with XBMC and several beers later I offered to so him how and thought that this might help some others as well! Over the years and it’s been a few. For help and support I’ve used the excellent forums at XBMC and Ubuntu along the way. The guide is my own work but the knowledge in it has been taken mostly from forum posts. You will need the following things Normal PC which will become our Open Media Vault server- The minimum specs for Open Media Vault can be found on the OMV Wiki At least 1 gig storage device, remember that the ENTIRE device is used. USB Pen drive for the operating system Compact Flash card I’ve used a Kingston Compact Flash card with adapter both purchased from my local computer shop. Compact Flash Compact Flash to IDE Adpater sudo hdparm –t /dev/sda English Reboot

Build your own NAS Following on from my last post where I mentioned this fantastically simple software for creating your own NAS (ideal for BackupAssist‘s Rsync feature), in this post I’m going to take things a step further and outline how to go about setting it up. Getting started After installing OpenMediaVault (OMV) you’re able to log into the main Web interface to start configuring your storage space and services. Before you go any further I highly recommend you change the default Web admin password from ‘openmediavault’ to something a little more secure, and you can do this under the General settings tab. Allocating your disks and storage space Our next task is set up the physical disks we plan to use in OMV. OMV includes built in software RAID support for spanning, mirroring and even striping, so if you have several drives you want to add together to form a resilient volume, there’s plenty of options there to tinker with. If we look under Storage > Physical disks we can now see two devices. What next?