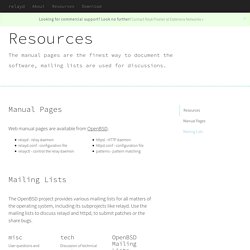 Use the mailing lists to discuss relayd and httpd, to submit patches or the share bugs. tech Discussion of technical topics for OpenBSD developers and advanced users. This is not a "tech support" forum, do not use it as such. OpenBSD developers will often make patches to implement new features and other important changes available for public testing through this list. Subscribe to tech » OpenBSD Mailing Lists Various other topics and details about the netiquette are found on OpenBSD's Mailing Lists page. 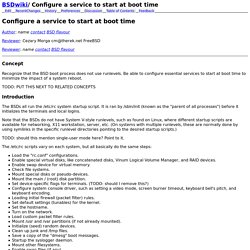 Be able to configure essential services to start at boot time to minimize the impact of a system reboot. Introduction The BSDs all run the /etc/rc system startup script. Note that the BSDs do not have System V-style runlevels, such as found on Linux, where different startup scripts are available for networking, X11 workstation, server, etc. TODO: should this mention single-user mode here? The /etc/rc scripts vary on each system, but all basically do the same steps: Load the "rc.conf" configurations.Enable special virtual disks, like concatenated disks, Vinum Logical Volume Manager, and RAID devices.Enable swap device for virtual memory.Check file systems.Mount special disks or pseudo-devices.Mount the main / (root) disk partition.Set device-specific flags for terminals. Some other tasks that may be enabled include: Use an rc(8) script to determine if a service is running and start, restart or stop it as required.

Author: hubertf contact BSD flavour Reviewer: name contact BSD flavour Concept In addition to directly sending signals to processes, realize that BSD systems provide scripts which can be used to check the status of services and to stop, start and restart them as required. 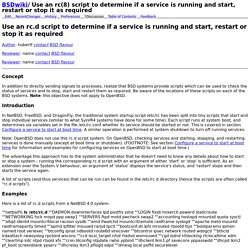 Be aware of the locations of these scripts on each of the BSD systems. Use an rc(8) script to determine if a service is running and start, restart or stop it as required. NetBSD. OpenBSD. PC-BSD. This release of PC-BSD® unhinges from the KDE Desktop Environment and adds support for GNOME, LXDE, and more! 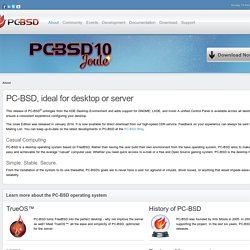 A unified Control Panel is available across all desktop environments to ensure a consistent experience configuring your desktop. The Joule Edition was released in January 2014. It is now available for direct download from our high-speed CDN service. FreeBSD. DragonFlyBSD. Console Server. Last modified on 2014-04-28 by wblock. 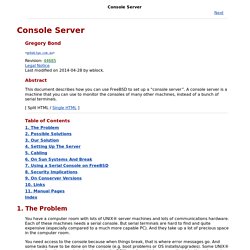 Abstract This document describes how you can use FreeBSD to set up a “console server”. A console server is a machine that you can use to monitor the consoles of many other machines, instead of a bunch of serial terminals. You have a computer room with lots of UNIX® server machines and lots of communications hardware. Each of these machines needs a serial console. You need access to the console because when things break, that is where error messages go.

If we are going to play about with consoles, then there are a couple of other things that would be great: Remote access. Explaining BSD. Last modified on 2018-06-29 07:33:14 by eadler. 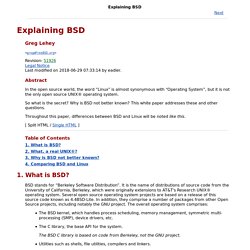 Abstract In the open source world, the word “Linux” is almost synonymous with “Operating System”, but it is not the only open source UNIX® operating system. So what is the secret? Why is BSD not better known? This white paper addresses these and other questions. [base] Contents of /head/share/misc/bsd-family-tree. NetBSD. Doing Stuff With FreeBSD, NetBSD, OpenBSD, & Mac OS X. Configure a service to start at boot time. Use an rc(8) script to determine if a service is running and start, restart or stop it as required. 10 - System Management. [FAQ Index][To Section 9 - Migrating to OpenBSD][To Section 11 - The X Window System] Table of Contents 10.1 - Why does it say that I'm in the wrong group when I try to su root? 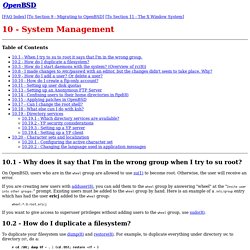 On OpenBSD, users who are in the wheel group are allowed to use su(1) to become root. Otherwise, the user will receive an error. If you are creating new users with adduser(8), you can add them to the wheel group by answering "wheel" at the "Invite user into other groups:" prompt. Wheel:*:0:root,ericj If you want to give access to superuser privileges without adding users to the wheel group, use sudo(8). 10.2 - How do I duplicate a filesystem?