Cyborg Design - Concept Art Production Techniques. In this DVD, instructor Michael Pedro gives an overview of the techniques he uses to achieve high-quality 3D concept designs, with an emphasis on production-setting workflows. 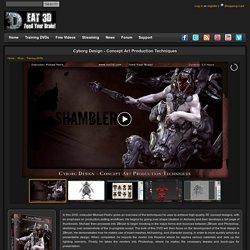 He begins by going over shape ideation in Alchemy and then develops a full page of thumbnails. Michael then proceeds into ZBrush to begin blocking in the major forms and bounces between ZBrush and Photoshop, sketching over screenshots of the in-progress sculpt. The bulk of this DVD will then focus on the development of the final design in ZBrush. He demonstrates how he makes use of insert meshes, kit-bashing, and character posing, in order to more quickly arrive at a presentable design.

When completed, he imports the model into Keyshot where he applies various materials and sets up the lighting scenario. With over 5 1/2 hours of content, this DVD is perfect for those who are looking to integrate ZBrush into their character design pipeline. Cyborg Design - Concept Art Production Techniques. Arch Linux. Downloads. Release Info The image can be burned to a CD, mounted as an ISO file, or be directly written to a USB stick using a utility like `dd`. 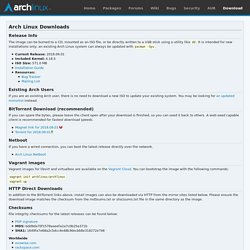 It is intended for new installations only; an existing Arch Linux system can always be updated with `pacman -Syu`. Existing Arch Users If you are an existing Arch user, there is no need to download a new ISO to update your existing system. You may be looking for an updated mirrorlist instead. BitTorrent Download (recommended) If you can spare the bytes, please leave the client open after your download is finished, so you can seed it back to others.

Netboot If you have a wired connection, you can boot the latest release directly over the network. Arch Linux Netboot HTTP Direct Downloads In addition to the BitTorrent links above, install images can also be downloaded via HTTP from the mirror sites listed below. Checksums File integrity checksums for the latest releases can be found below: Lusule on Linux. As I have mentioned elsewhere, Conky is a great little application for displaying system information and other odds and ends. 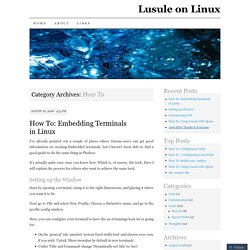 It’s lightweight, fast, it can be embedded on the desktop, and it’s highly customisable. This last point could also cause a problem; Conky can afford to be so customisable because it is customised entirely through its configuration file in the home directory: ~/.conkyrc. This mass of text based commands and code might seem daunting, but it’s not too bad to configure once you get the hang of it. This guide aims to show you how. Getting a Premade .conkyrc To start with, many, many, many people have already posted their .conkyrc files online; you can find most of them on the Ubuntu forums here or on the Conky home page here. Linux (линукс, ubuntu, debian) для чайников. Разработка корпоративных приложений на платформе Windows 8 и Azure. 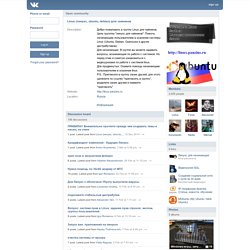 Руководство по Linux для начинающих (часть 2) Installation Guide. Live Systems Project. Универсальная Операционная Система. SGI - The Trusted Leader in High Performance Computing: Compute, Data Management, Data Analytics. Unix. Unix (all-caps UNIX for the trademark) is a family of multitasking, multiuser computer operating systems that derive from the original AT&T Unix, developed in the 1970s at the Bell Labs research center by Ken Thompson, Dennis Ritchie, and others.[3] Many clones of Unix have arisen over the years, of which Linux is the most popular, having overtaken the popularity of "true" Unix on server platforms since its inception in the early 1990s. 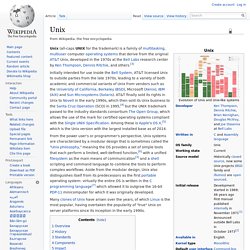 Overview Originally, Unix was meant to be a programmer's workbench to be used for developing software to be run on multiple platforms[8] more than to be used to run application software. The system grew larger as the operating system started spreading in the academic circle, as users added their own tools to the system and shared them with colleagues.[9] History Standards In 1999, in an effort towards compatibility, several Unix system vendors agreed on SVR4's Executable and Linkable Format (ELF) as the standard for binary and object code files. 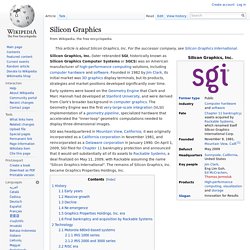 (later rebranded SGI, historically known as Silicon Graphics Computer Systems or SGCS) was an American manufacturer of high-performance computing solutions, including computer hardware and software. Founded in 1982 by Jim Clark, its initial market was 3D graphics display terminals, but its products, strategies and market positions developed significantly over time. Early systems were based on the Geometry Engine that Clark and Marc Hannah had developed at Stanford University, and were derived from Clark's broader background in computer graphics. The Geometry Engine was the first very-large-scale integration (VLSI) implementation of a geometry pipeline, specialized hardware that accelerated the "inner-loop" geometric computations needed to display three-dimensional images.