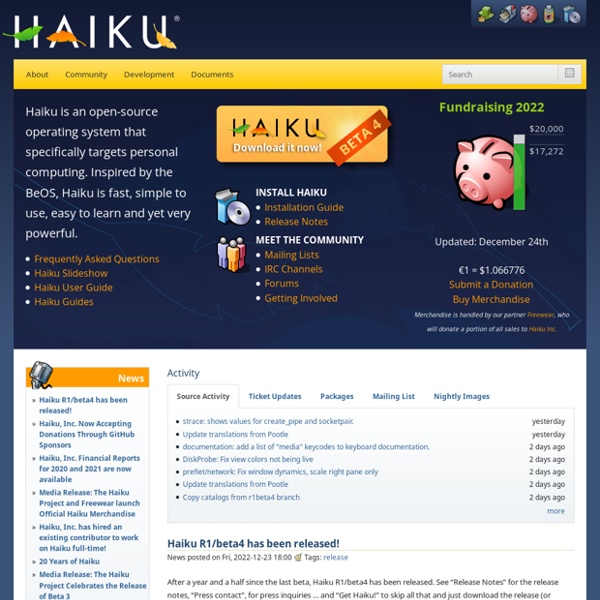 The Google Summer of Code™ 2013 is on! Haiku is proud to be applying as Mentoring Organization ! Thanks goes to the participation of various individuals in the community, particularly our Google Summer of Code admin Matthew S. Madia and those who volunteered to become Haiku mentors . If selected, 2013 marks the seventh consecutive year for Haiku as a mentoring organization. Once again, we could be joining many open source projects chosen by Google to take part in this great program.

Hacker C0mrade Leaks 6 GB of Data from Various Companies Worldwide - Softpedia - Vimperator After publishing a large number of email databases allegedly obtained from Trend Micro and partner company Sykes, the hacker known as C0mrade returns with another massive data leak. Two files, totaling around 6 gigabytes of information have been posted online, presumably obtained from a number of high-profile companies. “Today, 6.38 GB of Mail Data for companies all over the world will be published. Amongst those affected include CitiBank (Banking, Credit Cards, Lending & Investing – Employee) – NHComputerLearning (IT, Desktop Application and Business Skills Training),” the hacker said in a statement that has since been removed from Pastebin. Other companies named as being affected by the data leak are Serco, Marathon Technologies, and Pfizer Inc. – the world's largest research-based pharmaceutical organization.

Which VPN Providers Really Take Anonymity Seriously? As detailed in yesterday’s article, if a VPN provider carries logs of their users’ activities the chances of them being able to live up to their claim of offering an anonymous service begins to decrease rapidly. There are dozens of VPN providers, many of which carry marketing on their web pages which suggests that the anonymity of their subscribers is a top priority. But is it really? Do their privacy policies stand up to scrutiny? We decided to find out. Over the past two weeks TorrentFreak contacted some of the leading, most-advertised, and most talked about VPN providers in the file-sharing and anonymity space.

In The UK, You Will Go To Jail Not Just For Encryption, But For Astronomical Noise, Too - Falkvinge on Infopolicy - Vimperator There was some surprise in the comments of yesterday’s post over the fact that the United Kingdom has effectively outlawed encryption: the UK will send its citizens to jail for up to five years if they cannot produce the key to an encrypted data set. First of all, references – the law is here. You will be sent to jail for refusing to give up encryption keys, regardless of whether you have them or not. Five years of jail if it’s a terrorism investigation (or child porn, apparently), two years otherwise. It’s fascinating – there are four excuses that keep coming back for every single dismantling of democracy.

<b>SKYPE GOES OPEN SOURCE......FLAWLESS VICTORY:</b><br> AFTER MICROSOFT ACQUIRING SKYPE FOR 8.5 BILLION DOLLARS <b>AND PROCEEDING TO ADD BACK DOORS FOR GOVERNMENT</b> TO THE PROGRAM, THE SOFTWARE HAS BEEN HACKED AND IT'S SOURCE CODE RELEASED additional d not "stolen", but "reverse engineered". "information wants to be free" Reverse engineering is nothing but that. The "proprietary" nature of the information was a farce to begin with.

The Madi Campaign - Part I - Securelist - Vimperator For almost a year, an ongoing campaign to infiltrate computer systems throughout the Middle East has targeted individuals across Iran, Israel, Afghanistan and others scattered across the globe. Together with our partner, Seculert, we-ve thoroughly investigated this operation and named it the ?Madi, based on certain strings and handles used by the attackers. You can read the Seculert analysis post here. The campaign relied on a couple of well known, simpler attack techniques to deliver the payloads, which reveals a bit about the victims online awareness.

mapping MAC addresses - samy kamkar - Vimperator android map exposes the data that Google has been collecting from virtually all Android devices and street view cars, using them essentially as global wardriving machines. You can use this tool to accurately locate virtually any router in the world, as well as position iPhones and Android phones. When the phone detects any wireless network, encrypted or otherwise, it sends the BSSID (MAC address) of the router along with signal strength, and most importantly, GPS coordinates up to the mothership. This page allows you to ping that database and find exactly where any wi-fi router in the world is located. Note that iPhones also send this BSSID and Cell Tower Information up to Apple, as well.