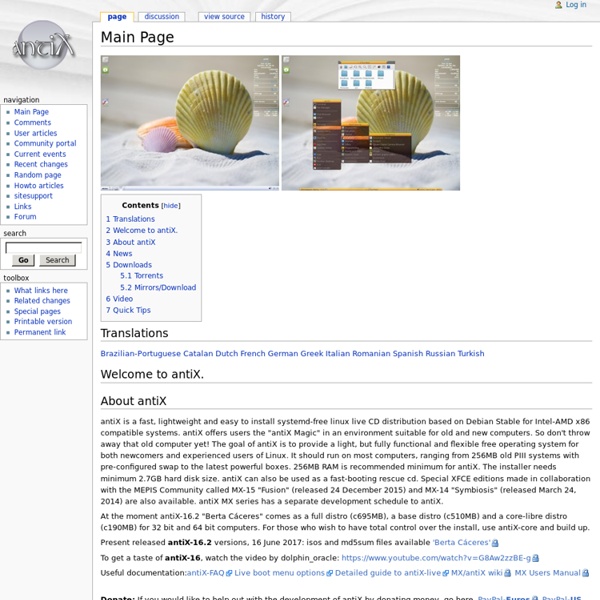 Clonezilla - About DSL information kanotix.com :: GNU Linux Live system based on Debian, optimized for HD-install and high performance Small Unix Unix distributions for embedded devices Embedded devices include those from Soekris Engineering, PC Engines WRAP boards or other PC/104 compliant devices. m0n0wall is a FreeBSD-based distribution optimized to run as a firewall on embedded devices. It has a web administration GUI that supports IPsec.A number of Linksys network devices can be re-flashed and loaded with Linux for other uses. Small and live CD Linux based distributions KNOPPIX is a Debian-based bootable/live-CD with automatic hardware detection and support for many graphics cards, sound cards, USB and SCSI devices and other peripherals.Openwall is a Linux distribution with a focus on security that is compatible with many RPM-based packages. Small and live CD BSD based distributions LiveBSD is a live system on a CD similar to Knoppix based on the latest FreeBSD releases. Utilities for small Unix distributions Embedded news and devices LCD and LED output

Where Debian meets Enlightenment ZipSlack Details[edit] ZipSlack used the UMSDOS filesystem under Linux, which means that it actually ran on top of the FAT filesystem, originally widely used by Microsoft operating systems, and commonly found today on various types of removable media such as ZIP disks, SuperDisks, USB flash drives, and Secure Digital cards. ZipSlack was quite lightweight, excluding a great deal of the software considered “normal” on an installation of a GNU/Linux based distribution today. For example, in ZipSlack, the X Window System was not present by default, nor were any GUI based web browsers. However, since ZipSlack was essentially just a miniature installation of Slackware, you were able to use the Slackware package management system to install whatever packages you may need. Minimum requirements[edit] As downloaded, ZipSlack required approximately 100 megabytes of disk space and an Intel 80386 or compatible CPU. The UMSDOS file system needs to be hosted on a FAT subsystem, not NTFS. Caveats[edit]

Knoppix install to hard disk HOWTO > Linux Reviews > Software guides > Linux Distributions > Knoppix Hard Disk Installation HOWTO by David McNab Русский (Russian) by Владимир Царьков (Vladimir Tsarkov) Francais by Dany Martineau Deutsch Italiano Espanol Norsk (Other translations needed - please link back to this page, with the English flag ( ). Introduction System Requirements Installation Procedure What is Linux? Introduction Full GNU/Linux Desktop installed in 20 minutes flat! Knoppix is a remarkable Linux 'demo' distribution, in that it can run totally from a CD, without disturbing any existing software or disks on the system it's running on. Even better, Knoppix can auto-detect hardware as it starts up, and does quite a good job of configuring this hardware. And still better, Knoppix is chock-full of the best desktop software which GNU/Linux has to offer - office software, games, productivity suites, software development tools, multimedia - you name it! System Requirements Installation Procedure What is Linux?