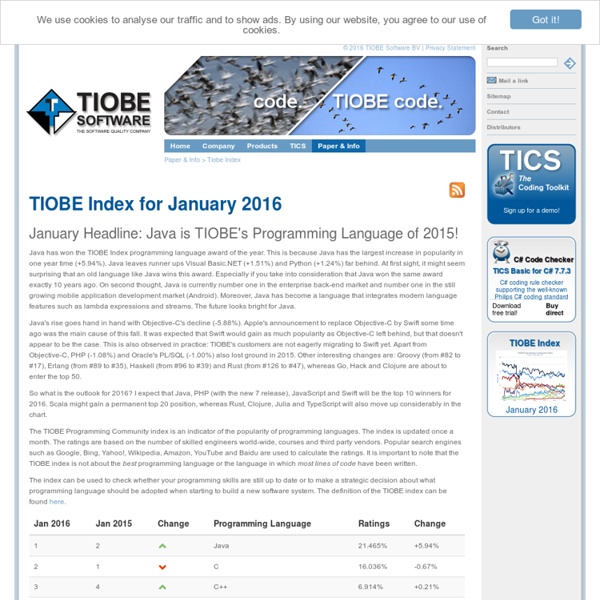 PYPL PopularitY of Programming Language index The TIOBE Index is a lagging indicator. It counts the number of web pages with the language name. has over 20 million pages on the web, [s] while has only 11 million. [s] This explains why Objective-C has a high TIOBE ranking. But who is reading those Objective-C web pages ? Hardly anyone, according to Google Trends data. is searched 30 times less than . [s] In fact, the use of by the TIOBE index is misleading (see next question).

Best Programming Quotations A good programmer is someone who looks both ways before crossing a one-way street. -- Doug Linder, systems administrator A most important, but also most elusive, aspect of any tool is its influence on the habits of those who train themselves in its use. If the tool is a programming language this influence is, whether we like it or not, an influence on our thinking habits. -- Edsger Dijkstra, computer scientist Comparison of Scriptol, C and PHP code The code of the Scriptol language is intuitive and simple. Instead, the PHP code is inherited from old languages such as C and the command line language of UNIX, Bash, designed to limit the consumption of resources and not to improve the productivity of programmers A clear syntax Scriptol doesn't need for semi-colon at end of statements. The end of the line is also the end of the statement unless several statements fits on a same line, in this case they are separated by semi-colons.

App Inventor for Android App Inventor for Android is an open-source web application originally provided by Google, and now maintained by the Massachusetts Institute of Technology (MIT). App Inventor and the projects on which it is based are informed by constructionist learning theories, which emphasizes that programming can be a vehicle for engaging powerful ideas through active learning. As such, it is part of an ongoing movement in computers and education that began with the work of Seymour Papert and the MIT Logo Group in the 1960s and has also manifested itself with Mitchel Resnick's work on Lego Mindstorms and StarLogo.[1][2] Implementation[edit] TIOBE - The Software Quality Company TIOBE Index for February 2017 February Headline: Educational language Scratch enters TIOBE index top 20 The Scratch programming language from MIT Media Lab has entered the TIOBE index top 20. Scratch is a language to learn programming. It is especially used at schools and is now getting really popular.

GetStartedwithJavaDB Introduction Java DB is Sun's supported distribution of the open source Apache Derby 100% Java technology database. It is fully transactional, secure, easy-to-use, standards-based — SQL, JDBC API, and Java EE — yet small, only 2MB. The Apache Derby project has a strong and growing community that includes developers from large companies such as Sun Microsystems and IBM as well as individual contributors.It is shipped with JDK 1.6 and NetBeans 6. Our ServicesSite Submit URL to all Search Engines Free, Google, Yahoo and Bing Hi guys, How are you? We are a team of 60+ professionals which includes 25 full time SEO experts. We are proud to inform you that our team handled 250+ SEO projects and obtained 50000+ manually built links in the past 1 year. Most people come in our site have one website or more, Some of this sites large and some of them is small, We offering great services for all websites in internet. Would you like to increase the leads / sales generated from your website?

15 Tips for Launching a Successful Mobile App Edith Yeung is the head of marketing of Dolphin Browser, the world's first Gesture, Webzine and Add-on-enabled mobile browser. She is also the founding partner of RightVentures, which focuses on cloud and mobile investments. You can find out more about Dolphin on Twitter, Facebook or via the Dolphin blog. Many of us have dreamed up great ideas for mobile apps. We’re sure we can develop an app innovative and unique enough to generate broad appeal, to achieve star power above all other apps in its class. At this point, you've defined your big idea. Paul Ford: What Is Code? A computer is a clock with benefits. They all work the same, doing second-grade math, one step at a time: Tick, take a number and put it in box one. Tick, take another number, put it in box two. Tick, operate (an operation might be addition or subtraction) on those two numbers and put the resulting number in box one. Tick, check if the result is zero, and if it is, go to some other box and follow a new set of instructions. You, using a pen and paper, can do anything a computer can; you just can’t do those things billions of times per second.