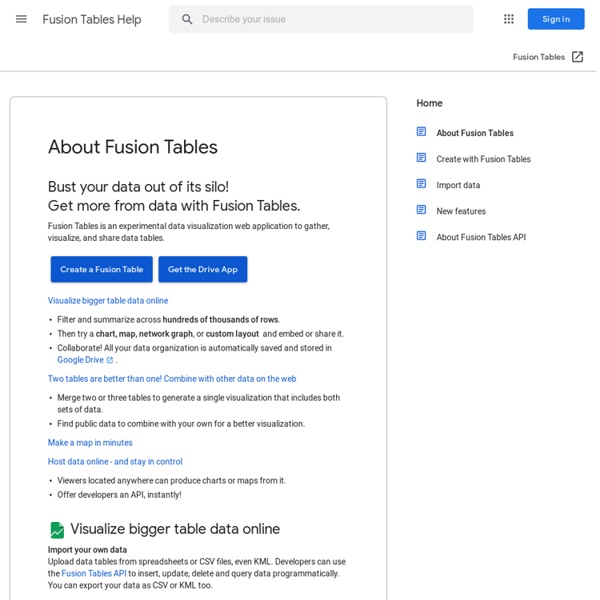 Bust your data out of its silo! Get more from data with Fusion Tables. Fusion Tables is an experimental data visualization web application to gather, visualize, and share data tables. Visualize bigger table data online Filter and summarize across hundreds of thousands of rows. Then try a chart, map, network graph, or custom layout and embed or share it. Two tables are better than one! Merge two or three tables to generate a single visualization that includes both sets of data. Make a map in minutes Host data online - and stay in control Viewers located anywhere can produce charts or maps from it. Visualize bigger table data online Import your own data Upload data tables from spreadsheets or CSV files, even KML. Visualize it instantly See the data on a map or as a chart immediately. Publish your visualization on other web properties Now that you've got that nice map or chart of your data, you can embed it in a web page or blog post. Two tables are better than one! Make a map in minutes

30 Superb Examples of Infographic Maps As you search the web you’ll come across a wide range of interactive and graphical maps. Deciding when, where and how to integrate or display a map on your site is the first step, the second should be what technology and illustrations to use. If you’re all about interaction, JQuery, Ajax, or Flash are all effective technologies that hold their own ground. The Scottish Scoundrel Who Changed How We See Data A 1824 Playfair line graph, illustrating of how bread and stock prices are affected by war. (Image: William Playfair/Public Domain) As news events churn up a flood of new information, many turn to charts to absorb it.

Interactive: Ten years of war The war in Afghanistan - the longest in American history - has changed markedly since US president Barack Obama took office in January 2009. Troop levels remained roughly constant under his predecessor, former president George Bush, with around 30,000 American troops deployed in Afghanistan; the number of coalition military deaths also remained bracketed between 150 and 300. Since Obama took office, both the American "footprint" and the level of violence have incresed sharply. Troop levels by month The "surge" announced by Obama in late 2009 was actually the second of his presidency. Shortly after taking office, Obama ordered more troops to Afghanistan, bringing US troop levels from roughly 33,000 in January 2009 to more than 67,000 by year's end.

Online Charts Builder Hohli Online Charts Builder New version: Try new version of Charts Builder, it based on new Google Charts API dDrive : dDrive – Infinitely Variable Transmission Missing or Broken Files When you get a 404 error be sure to check the URL that you are attempting to use in your browser.This tells the server what resource it should attempt to request. In this example the file must be in public_html/example/Example/

Deluge: How 300.000 Norwegians Move House in a Year The short animation titled "Deluge" [bengler.no] by Even Westvang reveals how public data can be analyzed to reveal potentially interesting patterns. In particular, this movie demonstrates the patterns of 300.000 Norwegians moving house, by cross-referencing the tax records of about 4 million individual Norwegians from 2006 and 2007. In the movie, the data is filtered by paramaters like yearly income or age, and a distinction is made between 'incoming' (red) and 'outgoing' (blue) citizens. As a result, one can perceive that elderly people generally move over relatively short distances, while high-earners tend to move out of the big cities to the shores. Interestingly, in Norway all the incomes and fortunes of all tax paying individuals are made public every year, which consists of the full name, year of birth, postal code and their attendant financial data. Watch the movie below.

The Surprising History of the Infographic As the 2016 election approaches, we’re hearing a lot about “red states” and “blue states.” That idiom has become so ingrained that we’ve almost forgotten where it originally came from: a data visualization. In the 2000 presidential election, the race between Al Gore and George W. Bush was so razor close that broadcasters pored over electoral college maps—which they typically colored red and blue.

Power BI Launched this week in beta mode, Microsoft's Power BI allows you to export live-updating visualizations to the web. Power BI is Microsoft's answer to Tableau - providing users with a suite of tools to analyze data, visually organize insights and, as of this week, share them on the web. For journalists who aren't used to working with data, the suite offers an useful introductory platform to begin integrating data-driven insights into their stories. For example, one cool feature of the suite is that users can derive insights from data using natural language queries. Additionally, once you start typing, Power BI offers predictive suggestions based on your data's schema, as well as the best visualizations to represent your query.

Zondle.com - Fun Learning Games For Kids That Teachers Can Customize Home > Online > Zondle.com - Fun Learning Games For Kids That Teachers Can Customize It's not always easy for teachers to keep kids enthralled with learning these days. The world introduces so many fun and interesting distractions. While there are some teachers that still turn away from using technology in the classroom, a large majority of educators now realize the value of bringing computers - and sometimes even computer games - into the classroom. New quadcopter from Australian firm From Wired's Danger Room blog: "Last month, an Australian company, Cyber Technology (WA) Pty Ltd, used a drone with ducted fans in an actual operation. Their Cyber Quad vertical take-off drone carried out an extended survey of an offshore drilling platform and an oil rig damaged by fire. The drone flew around, under and inside the two structures, which are joined by a gantry, as well as landing on them for a better look. “The ability to land the CyberQuad on the various levels of the platform where the main damage occurred gave engineers and disaster control experts the ability to see the extent of the structural damage visually,” Andrea James, head of Communications at Cyber Technology told Danger Room. The Cyber Quad can carry a high-definition video camera or sensors to detect specific gases, like industrial pollutants or chemical warfare agents. The brushless electric motor is quiet and does not produce sparks – important when investigating a damaged oil platform.