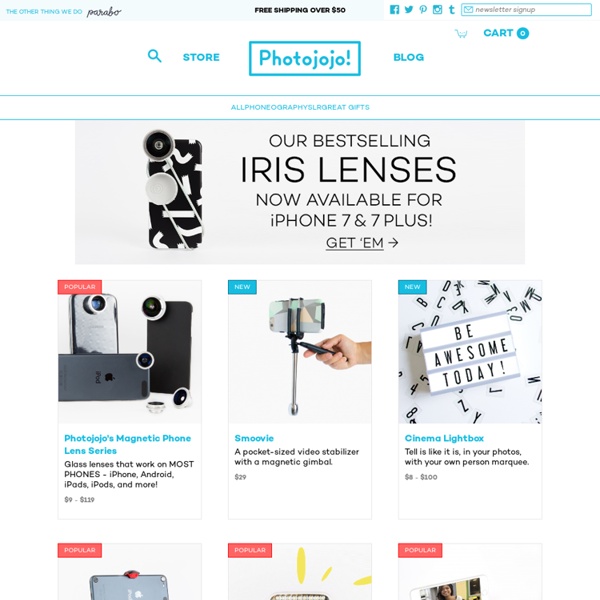 Turn Your Fridge into a Gallery Wall, Make Photo Magnet Mosaics! They say opposites attract. Big, boring fridge, meet cute magnetic photos. We think you’ll get along just fine! It’s time to spruce up that lonely appliance, sitting in the corner, begging for attention. Follow this tutorial for a step-by-step guide to make miniature works of art in the form of magnetic photo tiles. Trey Ratcliff - Google+ - Why I Don't Use Watermarks I get this question a lot, and… Ken Rathke – Trey and Thomas Hawk have many things in common - each has over 300,000 followers on Google Plus. Whether their profile or views in this conversation makes them your hero or leader is 100% your call. Both Rush Limbaugh and The Jersey Shore have large audiences, and popularity is not always the only indicator. What are rather humorous are the inconsistencies between Ratcliff and Hawk that neither really seems to fully resolve. Trey has moved on to other discussions with out ever really addressing some of the obvious inconsistencies in his philosophy/copyright policy, and Hawk is now taking a poll about the use of watermarks, logos, and signatures. (For an extra laugh, keep in mind this all started with Trey’s post accompanied by his photo from Times Square – an image that is filled with trademarked logos.)

Photography Tutorial: A Quick Guide to Understanding Your DSLR Camera Hi guys! With Labor Day weekend coming up, I know a lot of us are going to be out there taking pictures! :) Since we have a long weekend to practice, I wanted to share with you this basic intro to SLR photography. If you have an SLR camera and are nervous to take it out of auto mode, this is the tutorial for you. doodle duvet cover by stitch designworks gift wrapping available The award-winning sketchpad DIY duvet cover to use with its wash-out pens for messages, designs and notes, then wash and use again and again! Doodle duvet cover is printed to look like a giant piece of file paper, complete with printed holes, lines and red margins on both sides and comes complete with its own pack of 10 wash-out doodle colour pens so that you can make it individual, endlessly! It's ideal for jotting down late night thoughts, drawing a masterpiece, writing a story or just messaging: then just wash your duvet cover for a totally fresh start all over again! Button fastening.

31 Awesome Examples Of Long Exposure Photography December 22, 2011 | 5 Comments » | Topics: Photography, Pics via Cretique Hot Stories From Around The Web Other Awesome Stories How to get a blurred background from your dSLR's kit lens There are plenty of good reasons to put down your smartphone or point-and-shoot and buy a digital SLR. If, for you, it was because you drooled over food photography with a shallow depth of field or portraits where the subject is in sharp focus but the background is blurred, you may have immediately been disappointed by your shots and left wondering what you were doing wrong. The fact is the lens that comes with most dSLRs, aka the kit lens, isn't really your best option for achieving a shallow depth of field. Without getting into the technical details, cameras with large sensors, such as digital SLRs, are able to create more background blur than the much smaller sensors in an average point-and-shoot. However, you'll also want to use a lens with a wide maximum aperture, something the typical kit lens just doesn't have.

Friday’s Fab Finds: DIY Necklaces Happy Friday! Or should I say, Harry Potter Day? How many of you were up at midnight to see the last Harry Potter movie? I’m going tonight with my husband and I’m really excited, although a bit sad. I grew up with Harry Potter. Photographer Martin Klimas Paints Like Pollock With Sound How do you paint with sound? It’s a good question and the answer comes from German photographer Martin Klimas. He starts by putting different colored paint on top of a speaker over some translucent material, then cranks up the volume. The vibrations of the speaker shoot the paint into the air creating beautiful patterns and sculptural forms, and Klimas snaps them with his camera while in flight. We’re used to seeing audiovisual collaborations, like those explored by Quayola and Jamie XX, but they’re usually animated using computer software, whereas this is a much more analogue affair.

So You Want to be a Photographer? I remember very clearly when I decided to become a photographer. I had been working as an aide at my children’s school and due to the state’s budget, cuts were being made. All aides were being laid off. 55 incredible examples of photo manipulation We present collection of 55 incredible examples of photo manipulation. Some of them... you may know already, but another ones... could be new for you. What I'm sure about... all of them are simply worth of your attention.

Store — GoPano micro - 360 video lens for the iPhone How it works GoPano micro uses a specially curved mirror which gathers light from all directions and funnels it into the iPhone’s camera. The free GoPano app then transforms this image Sponsor Love: Nicolux Nicolux is a New York based online jewelry shop created by Jocelyn Negron, a former resident of Athens, GA. Jocelyn got her start in Athens redesigning and upcycling clothing but switched to accessories when she moved to NYC. Her work is modern, colorful, lightweight and comfortable.