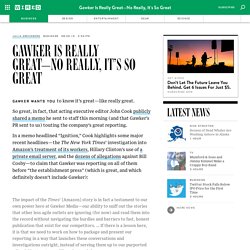 (Condé Nast is WIRED’s parent company.) The blowback was swift and furious. Many of Gawker’s commenters were outraged. Many journalists took to Twitter to lambast the site for exposing the sex life of a private citizen without any indication of why the story was relevant or newsworthy to the greater public. This morning Gawker pulled the post—the first time the site “has removed a significant news story for any reason other than factual error or legal settlement,” according to Gawker owner and founder Nick Denton in a post detailing the decision. The company’s six-member managing partnership voted 4 to 21 to pull the post, with Denton joined by the heads of advertising, finance, and strategy. “The media environment has changed, our readers have changed, and I have changed,” Denton writes.

Once-new media, it turns out, is entering middle age. All the Truths Go Back to Top. Snapchat Gives Kids What They Want by Teaming With BuzzFeed. Click to Open Overlay Gallery Snapchat just booted some old school media for the new school. 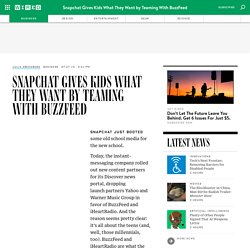 Today, the instant-messaging company rolled out new content partners for its Discover news portal, dropping launch partners Yahoo and Warner Music Group in favor of BuzzFeed and iHeartRadio. And the reason seems pretty clear: it’s all about the teens (and, well, those millennials, too). BuzzFeed and iHeartRadio are what the kids like. No doubt, with the Snapchat partnership, Yahoo and Warner Music were trying to reach a younger audience. Snapchat launched Discover earlier this year as a new way for its millions of predominantly young users to follow daily news and entertainment without ever leaving the hugely popular app. At launch, Discover seemed like a major shift for Snapchat—and yet the company appears to want to continue to grow the portal. Go Back to Top.

Gawker to Vote on Unionizing, Because New Media Is Old Now. Gawker Media may become a union shop. 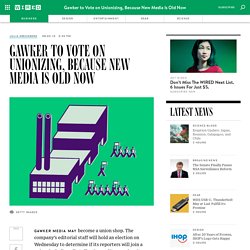 The company’s editorial staff will hold an election on Wednesday to determine if its reporters will join a union, including all staff writers of its popular sites like Jezebel, Gizmodo, and Deadspin. It’s a watershed moment not just for Gawker, but for the media industry as a whole—the first time such a vote has taken place in a digital-first newsroom.

But it’s not exactly a revolution. Vox Media Acquires Tech News Site Re/code. Re/code, the news site known in Silicon Valley circles for breaking stories about tech giants, has some news of its own. 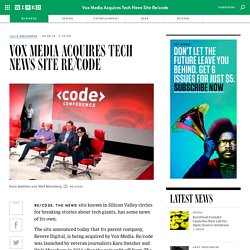 The site announced today that its parent company, Revere Digital, is being acquired by Vox Media. Re/code was launched by veteran journalists Kara Swisher and Walt Mossberg in 2014 after the pair split off from The Wall Street Journal. “We will continue to publish under the same name and leadership, with editorial independence,” Mossberg and Swisher wrote in a note to readers.

“This is the next big step in our mission to bring you quality tech journalism, because our work will now be amplified and enhanced by Vox Media’s deep and broad skill set.” Re/code will join a number of niche news sites that are a part of Vox Media’s portfolio. While The Verge says more than 24.5 million people visited the site in April, Re/code has reportedly had trouble gaining traction with an audience beyond Silicon Valley. Go Back to Top. Google Sends Reporter a GIF Instead of a 'No Comment' In the Future, Robots Will Write News That's All About You. Here come the robot reporters. 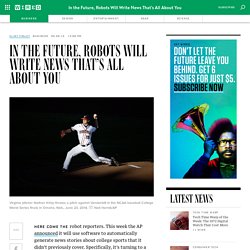 This week the AP announced it will use software to automatically generate news stories about college sports that it didn’t previously cover. Specifically, it’s turning to a content generation tool called Wordsmith, created by a Durham, North Carolina-based company called Automated Insights. It’s latest case of big news organizations turning to algorithms to create content. The AP — which is an investor in Automated Insights — already uses Wordsmith to generate stories on corporate quarterly earnings reports. Meanwhile, automated content competitor Narrative Science provides similar services to publications such as Fortune and Big Ten Network. But is anyone actually reading any of this machine generated content? For example, the company generates Fantasy Football game summaries for millions of Yahoo users each day during the Fantasy Football season, and it helps companies turn confusing spreadsheets into short, human readable reports.