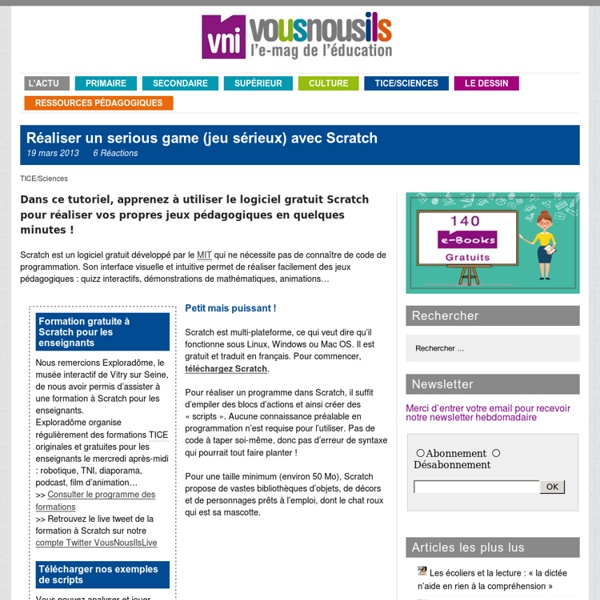 Scratch Projects Project #11: Communication Project Requirements: 1. Design a user interface where different icons represent catagories of short phrases speech impaired students need. For Example: Klackerlaken KlackerlakenWorkshop (2011) A special kind of vermin was identified in the summer of 2011. Due to the fact that initially mainly bottle caps, especially CLUB MATE caps, were infested, the new pest was at first called MATErlaken. Other popular names include Drinken Lights, or in German, Kronemänner. The Klackerlake (clanking bug) is an invasive species, and a pest indeed: A mobile LED-Throwie, equipped with poisonous button cells, whose remains might outlive us. The first specimens were sighted at the Chaos Communication Camp in Finowfurt in August 2011. Mobile Robotics with Scratch: The whole Truth about the integration of Scratch, Arduino and Bluetooth We wanted to create a simple strategy of integrating Scratch and Arduino to teach programming mobile robots. We came up with 4 tutorials that attack the major problems we encountered. Here they are. For a long time we struggled with the task of creating a simple, low-cost, platform-independent, reliable and stable strategy of integrating Scratch and Arduino in such a way that you could use Scratch to teach the principles and programming of mobile robots (including cars and walkers) to Middle School-aged kids.

Face Research ⇒ Demos ⇒ Transform an Image Drag the images to the blank faces and click on the button to see the “image to transform” transformed by some percentage of the difference between the “transform dimension” images. Examples: Settings Image Display Height: 200px Shape Transformation: % Colour Transformation: % Shape: to % Colour: to % Frames: Speed: Source Images Individuals Age Averages Ethnicity Averages 77 Educational Games and Game Builders I'm often asked if I know of any games for subject "x," "y," or "z" for a particular grade level or age group. My answer is usually yes, but I need to search my archives. Therefore, I've gone through my archives and dug up many of games that I've mentioned over the last four years that are still active online. Consider this my humongous list of educational games. 1. Kids Spell provides eight free games that help students learn to spell more than 6,000 words.

The Royal Society of Edinburgh Resources Computing Science → Mobile App Development → This resource, produced by the RSE and the BCS Academy of Computing, provides a course in programming for mobile devices. It exemplifies a subset of the Computing Science-related outcomes of Curriculum for Excellence at Levels 3 & 4 and beyond (specifically, in this case, National 4 Computing Science). It explores new paradigms in Computing such as mobile technologies and new interfaces, whilst providing ample opportunity for inter-disciplinary linkage. Exercises are provided with sample answers and there are many additional activities which can be used to both broaden and deepen the topic. Above all, this resource should not be seen as prescriptive.

Recycled CD iPhone Dock Some of our readers will have seen the fun homemade iPhone accessories that we have made before, like the Pencil iPhone Stand and the Cardboard iPhone Dock, the latest one is a Dock for your iPhone or iPod made from some recycled CDs, the Recycled CD iPhone Dock. I wanted to make a dock for the iPhone from stuff I had lying around the house, but I also wanted to make sure that it would look cool sat on my desk whilst my iPhone was charging ans syncing, so I came up with the idea of using old CDs, you could also use DVDs as well. I think it looks pretty good from the photos, and it is very easy to make, you can also use it for virtually any iPod and both the 2G and 3G iPhones, plus it will also work for the new iPhone 3GS. To make your own you will need a Dremel, 11 to 12 CDs or DVDs, you will need 4/5 more disks than the height of your iPhone charging connector on the USB cable. Mark out the width of the silver connector that goes into your iPhone on the center of one of the CDs.

Kodu Kodu is a new visual programming language made specifically for creating games. It is designed to be accessible for children and enjoyable for anyone. The programming environment runs on the Xbox, allowing rapid design iteration using only a game controller for input. Programming as a Creative Medium The core of the Kodu project is the programming user interface. The language is simple and entirely icon-based.