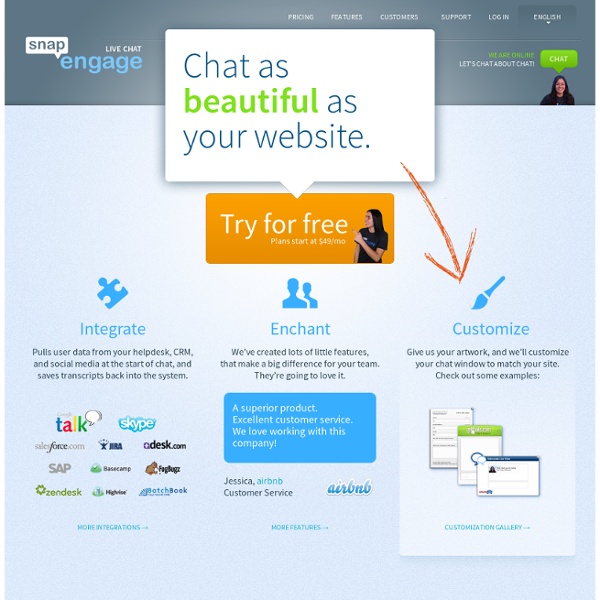 How to Make Wealth May 2004 (This essay was originally published in Hackers & Painters.) If you wanted to get rich, how would you do it? 12 Excellent, Free Screen Sharing & Remote Access Tools You Haven't Heard Of Yet Are you constantly being asked for computer help? Or perhaps you’re the one doing the asking. Either way, seeing and controlling screens remotely can save time and confusion on both ends. Remote access programs aren’t just for helping someone or being helped with a computer problem, they can also be very beneficial in assisting in holding meetings over the computer without actually meeting in person. We at MakeUseOf have covered article after article about remote access and screen sharing applications, but I’m going to consolidate some of the potentially less common ones that you may not have heard of. We have all likely heard of the popular programs in the game - TeamViewer and LogMeIn.

The 18 Mistakes That Kill Startups October 2006 In the Q & A period after a recent talk, someone asked what made startups fail. After standing there gaping for a few seconds I realized this was kind of a trick question. It's equivalent to asking how to make a startup succeed—if you avoid every cause of failure, you succeed—and that's too big a question to answer on the fly. Afterwards I realized it could be helpful to look at the problem from this direction. The 6 Best Free Online Meeting Tools to Collaborate With Your Team Advertisement The internet has made collaboration easier than ever. With just a few mouse clicks, you can look at someone halfway around the world and work with them on anything you like. Lots of online collaboration tools are costly, or meant for a specific field like visual design. However, you don’t have to pay anything to for awesome tools that make collaboration easy. Here are six services that cover all of your personal team needs.

BOOM Goes The Dynamite! 500 Startups Explodes With 2 New Periodic Elements, 12 Sensational Startups, and 1 Awesome Accelerator Program 500 Startups announces today they have discovered the newest periodic elements – Upandtotherightium (Ur) and Viralium (Vi). In addition to this amazing new discovery which is awaiting official recognition by the International Union of Pure and Applied Chemistry, they are also proud to announce they are in the early stages of developing 12 remarkable new startups in their just-launched 500 Startups Accelerator program at their headquarters in Mountain View. The buzz among the science community is the 500 Startups Accelerator will soon eclipse the CERN Large Hadron Collider in Geneva, Switzerland, which has long held the title of the world’s largest and highest-energy particle accelerator. Several Russian physicists have raised concerns this new 500 Startups Accelerator could be dangerous and has the potential for creating wormholes with unknown outcomes, possibly even the creation of a black hole.

What If Your Smartphone Could Read Your Mind? Kimera Is Working On It Today's smartphones are pretty darned smart. Yet we are only scratching the surface of what these devices might do. What if our smartphones were actually intelligent? Able to perceive our actions and intentions and act upon them on our behalf? That's the goal of a startup called Kimera. Apple's Siri, the current standard bearer for smartphone AI, has nominal contextual awareness; it understands whether you are speaking to it or trying to determine your location, for instance. An Entrepreneur's Guide to Relationship Management: Who To Keep in Touch With, and How Often Editor’s Note: This blog post has been excerpted from an article that was originally published by Zvi Band on the Contactually blog. When running my previous company, staying in touch was crucial to my business. We were one of dozens, maybe hundreds, of web development firms in the DC region, but we kept really busy (sometimes overwhelmingly so) thanks to a continual flow of referrals from past clients and our network.

The future is now: 10 startups leading the way in ‘big data’ How can big data and smart analytics tools ignite growth for your company? Find out at DataBeat, May 19-20 in San Francisco, from top data scientists, analysts, investors, and entrepreneurs. Register now and save $200! Lucene - Apache Lucene Core Apache LuceneTM is a high-performance, full-featured text search engine library written entirely in Java. It is a technology suitable for nearly any application that requires full-text search, especially cross-platform. Apache Lucene is an open source project available for free download. Please use the links on the right to access Lucene. Lucene offers powerful features through a simple API:

Art meets the open web Announcing the Mozilla Eyebeam Open(Art) Fellows Stefan Hechenberger and Addie Wagenknecht, Toby Schachman and Forrest Oliphant Today, Mozilla and the Eyebeam Art + Technology Center are pleased to announce the recipients of the first-ever Open(Art) Fellowships. Together, these creative technologists will be exploring the frontier of art and the open web as part of our new Open(Art) program. Meemoo project by Forrest Oliphant welcome to meemooVilson Vieira Paper GIFforresto GIF+HTML workshopBrasstown animators Joseph Weizenbaum Joseph Weizenbaum (8 January 1923 – 5 March 2008) was a German and American computer scientist and a professor emeritus at MIT. The Weizenbaum Award is named after him. Life and career[edit] Born in Berlin, Germany to Jewish parents, he escaped Nazi Germany in January 1936, emigrating with his family to the United States.