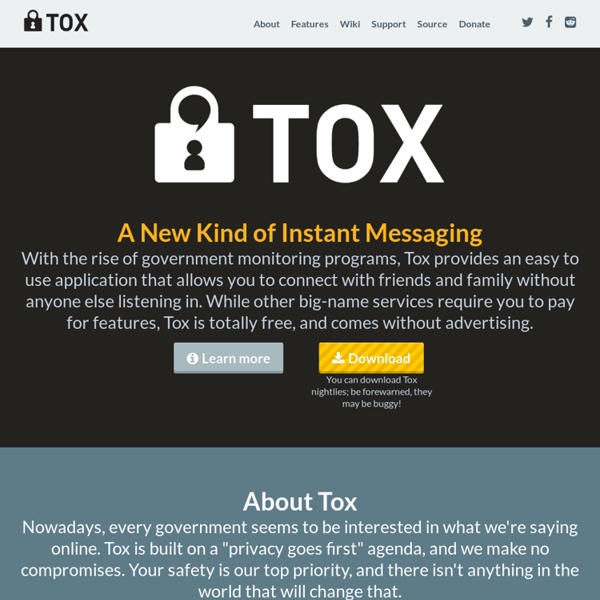 OneTime  —  Encryption with One-Time Pads Note (2014-01-09): OneTime 2.0 is currently in beta testing. See the compatibility notes for details. OneTime is an open source encryption program that uses the one-time pad algorithm to allow two parties to communicate privately. It has features to assist with the bureaucracy of pad management, and comes with built-in help. OneTime requires Python 2.6 or higher, and is for users who are comfortable running command-line programs. This is the output of 'onetime --intro':

A directory of direct links to delete your account from web services. Can't find what you're looking for? Help make justdelete.me better. easy Snapchat challenger Cyber Dust updated for Windows Phone with new improvements Although Snapchat still has not publicly committed to a Windows Phone app, it has not stopped competitor Cyber Dust from keeping theirs up to date. Version 0.8.0.157 arrived today and with it, a nice changelog. In fact, Cyber Dust has had regular updates over the last few months, bringing new features online and adding general improvements. Here is what is new for today. Cyber Dust 0.8.0.157 Improved the search look and feel.You can now search for users using a portion of their username.Long tap on hyperlinks lets you choose the web browser to use.Long tap on phone numbers and email addresses lets you instantly reach out.And, we've fixed several bugs you've reported to us.

An Encrypted Internet Is a Basic Human Right Nico Sell is co-founder and co-chairman of Wickr Inc. This Op-Ed is part of a series provided by the World Economic Forum Technology Pioneers, class of 2015. Sell contributed this article to Live Science's Expert Voices: Op-Ed & Insights. George Washington could have become a king, but instead devoted his life to giving power back to the people. This is why his political heritage remains so strong today, inspiring millions around the world to continue striving for liberty and democracy.

Your personalized news reader app Building a static website is relatively easy. But to build a rich, interactive web experience today takes much more code behind the scenes than you may have expected. And while becoming a web developer may seem daunting, there's a lot you can do to learn the ropes quickly and efficiently. Here's advice on how to become a web developer. I specialize in PHP for back-end development, but these tips are relevant no matter which aspect you're interested in. Set a practical goal

CryptoChat - Android Apps on Google Play Free unlimited, encrypted and private messaging with your friends over Google Talk/Hangouts, Facebook Chat, Dukgo, Jabber & more! Works with Android, iPhone, Mac, Linux or PC. ★ EFF rates as most secure: PC Mag “100 Best Android Apps of 2013.” hackme: Deconstructing an ELF File A friend recently asked me to find the password for a little hard-to-hack program he had written and I agreed to it. The short journey of a few hours that led me to its password were extremely interesting and this article describes the process as well as some of the new techniques learnt along the way. Few minutes after accepting his challenge, I received a binary called "hackme" in an E-mail and I got started!

20 Best Social Media Plugins For WordPress Since the advent of social networking sites such as Facebook, Twitter, LinkedIn, Pinterest et cetera, social media sharing has come of age as far as online promotion goes. Just the other day, Facebook’s user base hit the 1.15 billion mark! Twitter, too, is racking up the numbers and stacking up IPO cash. YouTube has changed how the world shares videos and as a result gained millions of users. This means that nearly everybody is on social media, your target customers included. You probably have one or two or three social networks open right now, don’t you?