How to use Google for Hacking 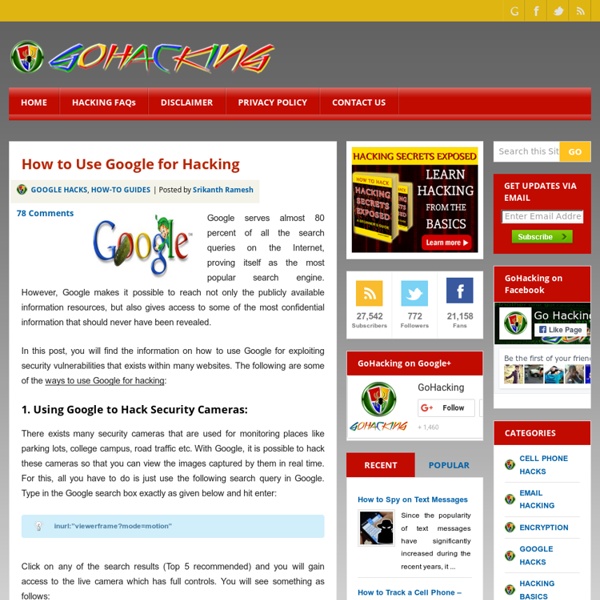 Google serves almost 80 percent of all the search queries on the Internet, proving itself as the most popular search engine. However, Google makes it possible to reach not only the publicly available information resources, but also gives access to some of the most confidential information that should never have been revealed. In this post, you will find the information on how to use Google for exploiting security vulnerabilities that exists within many websites. The following are some of the ways to use Google for hacking: 1. Using Google to Hack Security Cameras: There exists many security cameras that are used for monitoring places like parking lots, college campus, road traffic etc. inurl:”viewerframe? Click on any of the search results (Top 5 recommended) and you will gain access to the live camera which has full controls. As you can see in the above screenshot, you now have access to the Live cameras which work in real-time. intitle:”Live View / – AXIS” 2. intitle:index.of finances.xls

Wonderful Google Tutorials and Lessons on Web Safety and Digital Citizenship ThinkB4U is an online project created out of a partnership between Google Inc. and expert safety partners Common Sense Media, ConnectSafely, and the National Consumers League. It's main objective is to educate Internet users ( kids, parents, adults, teachers ) about important topics such as the protection of one's online identity, web safety, safe use of cellphones, digital citizenship and critical thinking skills. This site, designed by Fuel Industries, includes three main components that are meant to be explored together. VIDEOS:Each location -- Home, School, Mall -- includes several video shorts about a modern family's experience online. You determine which path the family members take at the critical decision point.

100+ Google Tricks That Will Save You Time in School – Eternal Code [via onlinecolleges.net] With classes, homework, and projects–not to mention your social life–time is truly at a premium for you, so why not latch onto the wide world that Google has to offer? From super-effective search tricks to Google hacks specifically for education to tricks and tips for using Gmail, Google Docs, and Google Calendar, these tricks will surely save you some precious time. Search Tricks Google Dorks cache: If you include other words in the query, Google will highlight those words within the cached document. For instance, [cache:www.google.com web] will show the cached content with the word “web” highlighted. Hacking Facebook User 'Access Token' with Man-in-the-Middle Attack In Past years, Many Security Researchers reported various Oauth vulnerabilities to the Facebook Security team, but if the app traffic is not encrypted, you are not protected from the man-in-the middle attack and the attacker could steal your private information, using 'access token'.

How To Search On Google Like Elite Hackers Google is best search engine in the world. Actually people think that Google's popularity is because of its simple and fast searching interface but friends, its more popular because it has rich operators and query support that will make your searching experience even better. Most of us doesn't know which operators are supported by Google and if they know some of them, they doesn't know how actually these operators work and enrich our searching practice. A Study of Fairy Tales: Chapter I. The Worth of Fairy Tales Sacred Texts Miscellaneous Index Previous Next In olde dayes of the kyng Arthour, Of which that Britouns speken gret honour, Al was this lond fulfilled of fayrie; The elf-queen, with hir joly compaignye, Daunced ful oft in many a grene mede. ONLY a few years ago, in the gardens of the Tuileries, in Paris, a statue was erected in memory of Charles Perrault, to be placed there among the sculptures of the never-to-be-forgotten fairy tales he had created,--Red Riding Hood, Sleeping Beauty, Puss-in-Boots, Hop-o'-my-Thumb, Bluebeard, and the rest,--so that the children who roamed the gardens, and in their play gathered about the statues of their beloved fairy friends, might have with them also a reminder of the giver of all this joy, their friend Perrault. Such is the tribute to fairy tales rendered by two great nations who have recognized fairy tales as the joyous right of children. Fairy tales bring joy into child life.

20 Tips To Use Google Search Efficiently Millions of people use Google search every day for a variety of reasons. Students use it for school, business people use it for research, and millions more use it for entertainment. Did you know that you may not be using Google search to its full potential? Feelings and Emotions Vocabulary Word List Advertisement. EnchantedLearning.com is a user-supported site. As a bonus, site members have access to a banner-ad-free version of the site, with print-friendly pages.Click here to learn more.

101 Google Tips, Tricks & Hacks Looking for the ultimate tips for Google searching? You've just found the only guide to Google you need. Let's get started: 1. The best way to begin searching harder with Google is by clicking the Advanced Search link. How To Hack Google Plus For SEO Value People tend to think of Google Plus as just another social network, built as Google’s challenge to Facebook’s incredible growth over the past decade. What most people don’t realize, however, is the SEO value that makes Google+ so much more than just a social networking platform. How so? Studies show a powerful correlation between search rankings and the number of Google +1's received by a URL. Searchmetrics found Google +1's to be the most highly correlated factor to search result rankings, and Moz's 2013 scientific correlation study placed Page Authority just above +1's at the top of all correlation factors.