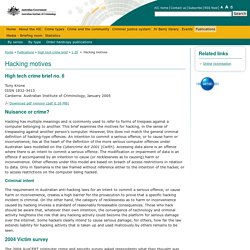 Hacking has multiple meanings and is commonly used to refer to forms of trespass against a computer belonging to another. Criminal intent The requirement in Australian anti-hacking laws for an intent to commit a serious offence, or cause harm or inconvenience, creates a high barrier for the prosecution to prove that a specific hacking incident is criminal. 2004 Victim survey The 2004 AusCERT computer crime and security survey asked respondents what they thought was the motive for any hacking attack experienced in the survey period. Motives The motives for hacking are varied and offenders form a heterogenous group. At what point do white hat hackers cross the ethical line? In recent months the news of Chris Roberts alleged hacking of an inflight entertainment system and possibly other parts of the Boeing 737 have sparked a wave of controversy. 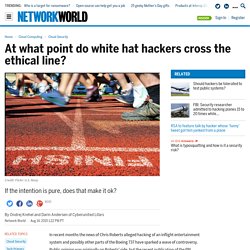 Public opinion was originally on Roberts' side, but the recent publication of the FBI affidavit changed that drastically. According to the affidavit, Roberts admitted to doing a live "pen-test" of a plane network in mid-air. Whether this is true or not, it raises some valid concerns over the ethical implications of white hat hacking. In the case of Roberts, who, according to the affidavit, was able to steer the airplane off the intended course, the consequences could have been dire. It is not believed that Roberts had any intention of hurting either himself or any of the passengers, but if the affidavit is in fact true, the possibility was real. Some believe it all comes down to intentions. But at what point does a white hat hacker cross the line? Herein lies the main issue. Ethical Hacking Code of Ethics: Security, Risk & Issues - Panmore Institute. Hacking significantly affects the development of systems and networks. 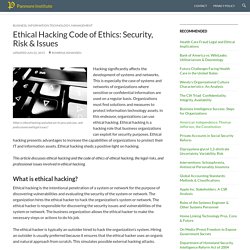 This is especially the case of systems and networks of organizations where sensitive or confidential information are used on a regular basis. Organizations must find solutions and measures to protect information technology assets. In this endeavor, organizations can use ethical hacking. Ethical hacking is a hacking role that business organizations can exploit for security purposes. Profiling hackers 33864. Fulltext. Data Security and Ethical Hacking: Points to Consider for Eliminating Avoidable Exposure. 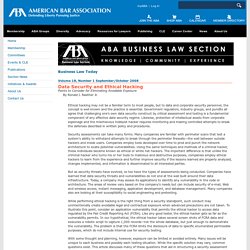 Raether Jr. Ethical hacking may not be a familiar term to most people, but to data and corporate security personnel, the concept is well known and the practice is essential. Government regulators, industry groups, and pundits all agree that challenging one's own data security construct by critical assessment and testing is a fundamental component of any effective data security regime. Likewise, protection of intellectual assets from corporate espionage and the mischievous hobbyist hacker requires monitoring and making controlled attempts to break the defenses described in written policy and procedures.

Security assessments can take many forms. But as security threats have evolved, so too have the types of assessments being conducted. While performing ethical hacking is the right thing from a security standpoint, such conduct may unintentionally create avoidable legal and contractual exposure when advanced precautions are not taken. Trust is essential and should be earned. 1512.02707. Thompson. Grey Hat Hacking: Reconciling Law with Cyber Reality. Yale Law Journal - A Site Where Hackers Are Welcome: Using Hack-In Contests To Shape Preferences and Deter Computer Crime. 112 Yale L.J. 1577 (2003) While the Internet has revolutionized communication and commerce, it has also created the conditions for a type of crime that can be committed anonymously, from anywhere in the world, and with consequences that are unprecedented in scope. 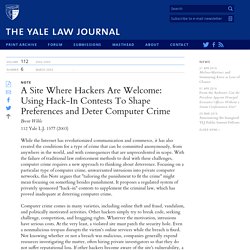 With the failure of traditional law enforcement methods to deal with these challenges, computer crime requires a new approach to thinking about deterrence. Focusing on a particular type of computer crime, unwarranted intrusions into private computer networks, this Note argues that "tailoring the punishment to fit the crime" might mean focusing on something besides punishment. It proposes a regulated system of privately sponsored "hack-in" contests to supplement the criminal law, which has proved inadequate at deterring computer crime.

Computer crime comes in many varieties, including online theft and fraud, vandalism, and politically motivated activities. License to hack? - Ethical hacking. If the term hacking means to cut or chop roughly through a computer system, then how do you perform it without damage to the software? 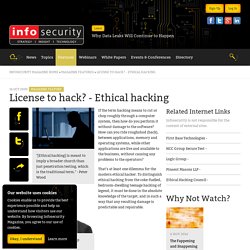 How can you ride roughshod (hack), between applications, memory and operating systems, while other applications are live and available to the business, without causing any problems to the operators? That's at least one dilemma for the modern ethical hacker. To distinguish ethical hacking from the coke-fuelled, bedroom-dwelling teenage hacking of legend, it must be done in the absolute knowledge of the target, and in such a way that any resulting damage is predictable and repairable. "The term was coined by IBM years ago", says Peter Wood, chief of operations at First Base Technologies.

"It's meant to imply a broader church than just penetration testing, which is the traditional term.