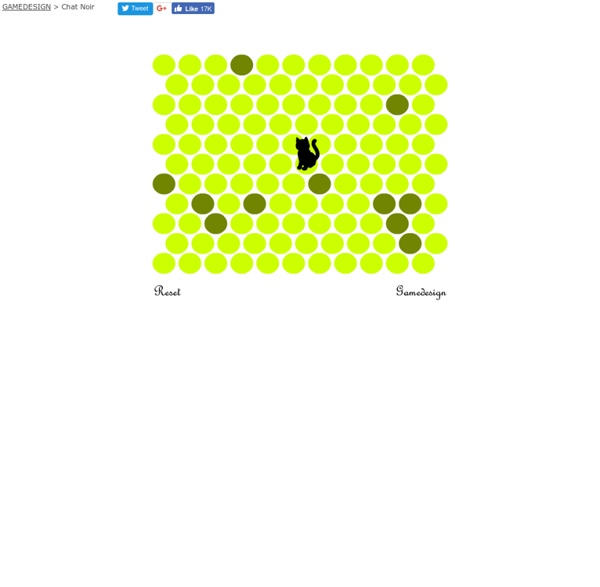 blog » the notebook of cartographer zachary forest johnson Binning is a general term for grouping a dataset of N values into less than N discrete groups. These groups/bins may be spatial, temporal, or otherwise attribute-based. In this post I’m only talking about spatial (long-lat) and 2-dimensional attribute-based (scatterplot) bins. Such binnings may be thought of as 2D histograms. This may make more or less sense after what lies beneath. THEREMIN - A Touch Friendly Synthesizer ✖Update: 7 February 2014 Thanks to everyone for sharing! Over 100,000 people have played on the theremin in the last 3 days which is absolutely amazing. Due to a large number of requests, we've began working on a record function as well as an offline version of the app which will be available soon. Feel free to either subscribe at the bottom of the page or follow us on Facebook & Twitter for updates and future toys.

Logic Games Online - Netwalk In the game of Netwalk, you are a network administrator, and someone has scrambled your network. Your job is to rotate all the pieces so that every computer is connected to the server by pipes and there are no lose ends in your network. Of course, the less work you need to do to complete your network the better, so Netwalk is scored by the number of clicks it takes you to rotate everything into place. Left click to rotate a tile counter-clockwise, and right click to rotate a tile clockwise. When you are certain of a tile's orientation, press the spacebar with the mouse cursor over that tile. The background will turn blue and you won't be able to accidentally rotate it without toggling the background again.

Cursor*10 (NEKOGAMES) Hello World!! フラッシュゲーム★FLASH GAME (iPhoneではプレイできない) NEKOGAMESのiPhone ＆ Androidアプリ Console Living Room : Free Software : Download & Streaming The Atari 2600 is a video game console released in September 1977 by Atari, Inc. It is credited with popularizing the use of microprocessor-based hardware and ROM cartridges containing game code, a format first used with the Fairchild Channel F, instead of having non-microprocessor dedicated hardware with all games built in. The console was originally sold as the Atari VCS, for Video Computer System. Following the release of the Atari 5200, in 1982, the VCS was renamed "Atari 2600",... Klein’s dessins d'enfant and buckyball We saw that the icosahedron can be constructed from the alternating group A_5 by considering the elements of a conjugacy class of order 5 elements as the vertices and edges between two vertices if their product is still in the conjugacy class. This description is so nice that one would like to have a similar construction for the buckyball. But, the buckyball has 60 vertices, so they surely cannot correspond to the elements of a conjugacy class of A_5 . But, perhaps there is a larger group, somewhat naturally containing A_5 , having a conjugacy class of 60 elements? This is precisely the statement contained in Galois' last letter. He showed that 11 is the largest prime p such that the group L_2(p)=PSL_2(\mathbb{F}_p) has a (transitive) permutation presentation on p elements.

Juegos Crossword GameJust like an old-fashioned word search! Using the mouse and the wordlist, find and highlight the hidden English words in the box! As the levels get harder, the words start appearing in different orientations. lapse: Imágenes de satélite Landsat de Cambio Climático, a través de Google Earth Engine TIME and Space | By Jeffrey Kluger Editors note:On Nov. 29, 2016, Google released a major update expanding the data from 2012 to 2016. Read about the update here. Spacecraft and telescopes are not built by people interested in what’s going on at home.

2048 Join the numbers and get to the 2048 tile! New Game How to play: Use your arrow keys to move the tiles. When two tiles with the same number touch, they merge into one! Note: The game on this site is the original version of 2048. Home Of Happy Wheels - Happy Wheels Hello pals. I'd like to continue hosting the flash version of Happy Wheels as long as possible. With the loss of certain ad networks, I'm going to try out a few different ad formats on this site as I continue to attempt to regain some of the revenue that went missing. I'll be making a few minor changes here and there to see whatever works best. programa de dibujo en línea Flame Painter is a unique paint program, it belongs to my 'I am an Artist' experimental project. I think with tools which inspires you, everyone can be an artist. You can try it here, change different brush settings and paint your own flame paintings. When you change the background from black to white, the palette changes from additive to subtractive and the feeling of the painting is very different. It's not easy to explain all brush parameters, so I leave this for your experimentation.

Curvy en HTML5 Curvy is a HTML5 puzzle game using the canvas element. Just rotate the tiles so that like colors connect. Modernizr tells me you don't have canvas support in your browser.